The Extraordinary Life And Death Of The World's Oldest Known Spider,,, This is the story of the oldest known spider in the world, and the people who knew her. The details are compiled largely from research conducted by Barbara Main and Leanda Mason, who knew her best over nearly half a century.

---She was born beneath an acacia tree in one of the few patches of wilderness left in the southwest Australian wheat belt, in an underground burrow lined with her mother's perfect silk.

Her mother had used the same silk, strong and thick, to seal the burrow's entrance against the withering heat of the summer of 1974, and against all the flying, prodding things that prowled the North Bungulla Reserve.

She lived like that, in safety and darkness, for the first six months of her life. Then one day in the rainy autumn months her mother unsealed the tunnel and she left.

It's likely that two or three dozen spiderlings left the burrow with her, and that nearly all of them soon died.

The 250-acre North Bungulla Reserve was surrounded completely by farmland, roads, abutting an abandoned gravel pit. Space was scarce under the leaves' protective shade, and competition was fierce. Most of the spider's siblings would be eaten by birds or lizards, or cannibalized by each other, or bake to death in the sun.

But she was fortunate. She found an unoccupied patch of earth a few feet from her mother's burrow, and began to dig.

She dug an almost perfect circle straight down into the soil, just large enough to fit her body, a small fraction of an inch across. Then she lined the tunnel with silk, as her mother had lined the one she hatched in.

For as long as she lived, this would be her only home.

She wove a silken door across the burrow's mouth, attached on one side to make a hinge. She dragged hundreds of twigs to the edge of the doorway, one by one, so that they radiated out like fan blades. 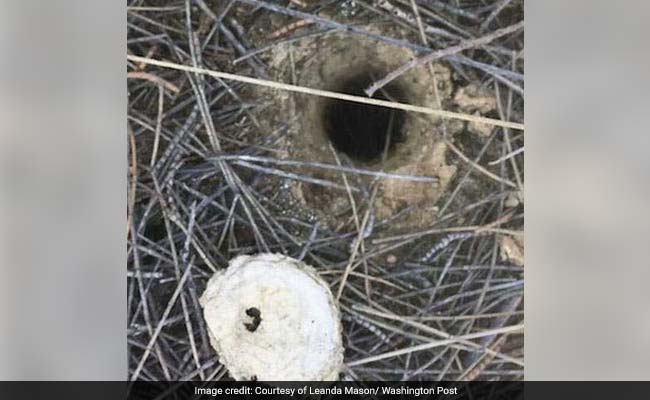 Then she went inside, closed the door and waited, likely days or even weeks, for her first real meal.

She was essentially blind, but attuned to every vibration in the earth, so when she finally felt something move along the twigs - an ant or small beetle, maybe - she leaped out and pulled it in.

In this way, she caught food when it came to her, and hid from the outside when there was nothing to eat. Scientists called her Gaius villosus - one of dozens of trapdoor spider species that lived in the vanishing wilderness of the Australian wheat belt.

After a year in her burrow, in 1975, she would have felt strange, heavy vibrations on the twigs outside her door. This often meant a predator was trampling around, or a large forager like a kangaroo.

This time, though, the vibrations were caused by Barbara York Main, who was standing directly over the burrow.

Main had grown up in the wheat belt, she would tell the Australian Broadcasting Corp. years later. Throughout the 20th century, farming and industrialization had destroyed almost all the wilderness in the region - leaving patches like the North Bungulla Reserve as precious sanctuaries for the tiny species that held her fascination.

"I felt an immediate affinity with small things," Main told the ABC. "I didn't have that one-on-one relationship with a kangaroo that I could with caterpillars."

Now she was a zoologist with the University of Western Australia. On that day in 1975, she knelt over the burrow, parted the twigs behind the spider's door and fixed a small metal sign into the soil.

Main spent hours beneath the acacia tree, marking every burrow she could find. She was building a family tree of Gaius villosus, whose hold on the earth seemed so fragile, and about which humans knew so little.

"It is also hoped ultimately to assemble complete case histories of several individual nests," Main told the International Congress of Arachnology in her first report in 1977, according to her written paper. "A life-cycle of perhaps twenty years notwithstanding."

But 20 years was just a guess. Among other things, she would later tell the ABC, "I wanted to know how long the spiders lived."

The next years were hard for the spiders. A long, dry summer in 1977 wiped out a third of one year's generation, Main wrote. Hungry quail scratched open nests. A scorpion even invaded one burrow.

Still, 16 survived and grew larger, expanding her burrow every year, until it was as wide as a dime, then a quarter, and larger still.

Gaius villosus was a resilient species, Main wrote when she published her first major paper on the project, in the Bulletin of the British Arachnological Society in 1978. "Although adult nests frequently have their doors and twig-lines torn off (presumably by birds) none appear to have been seriously affected by this. The spiders reattach their doors, sometimes upside down or back-to-front and attach new twig-lines."

She had tagged and mapped 101 villosus burrows by then, all within a few meters of each other, near the edge of the old gravel pit.

Main was impressed by how long the spiders seemed to live. Based on her estimates from their tunnel diameters and sporadic observations she had made before the study, she believed two matriarchs were at least 16 years old.

Main mentioned spider 16 only in passing in this early paper. She was only 4 years old, and nothing special, yet.

One day toward the end of the 1970s, spider 16 made a rare excursion to her front yard. She wove a sort of welcome mat outside her door - a net laced with pheromones, which Main would compare to a tea doily.

Then she went back down and closed the door - waiting this time not for the skittering of prey, but for the knock of a male caller.

Main wrote in her paper about the very different lives of male and female villosus spiders. The males left their burrows as soon as they were sexually mature - around age 6 or so - to go search for doilies and knock on doors.

The males never return to their burrows after mating, Main wrote. They wandered until they died, and all died young.

The female, however, went straight back to their burrows after sex. She sealed the door up extra tight with a finely contoured plug, crafted so precisely that it could seal out heat and rainwater, and spent the next year locked inside her home, to lay her eggs and shelter them.

The next autumn, she unsealed the burrow and sent her children off into the world, to live or die as they could.

These matriarchs were the secret to villosus spider's success in such an arid environment, Main noted. In their deep bunkers, they could survive droughts and fires on the surface. They could mate every few years, and continually replenish the spider population.

But even Main did not guess how much 16 would overachieve.

She spun, fed, spun and fed, and probably produced many generations of young. A swarm of grasshoppers raided the plants in 1991, according to a paper in Pacific Conservation Biology. An invasive plant species was spreading from the gravel pit. "Biodiversity is being reduced," the paper said.

Over the decades, spider 16's mother, siblings and countless cousins and children died. But the family tree kept growing, and each time 16's burrow hole was checked, it looked immaculate as ever.

In 2013, an Australian Broadcasting Corp. reporter named Vicki Laurie became intrigued by reports that an 84-year-old zoologist had been cataloging a family of spiders for 40 straight years.

So Laurie traveled with Main, out to an "an unremarkable bit of scrub" in the wheat belt, and watched her work.

"We spend three hours on our knees as Barbara checks each burrow to see if it's occupied or not," Laurie reported. "She observes, with a mild air of concern, how few new trapdoor burrows there are and how unseasonably dry the reserve is."

When they reached the plaque of spider 16, Laurie was skeptical that it had really been occupied by the same spider for the last four decades. But Main explained that females never left their burrows until they died, and no other spider ever moved in.

Main flipped open the door with a small knife, and through Laurie, 16 was introduced to the world.

"Inside, I can just see the spider, which has pulled a veil of silk lining half across its burrow," Laurie recalled in her report. "Under my breath, I introduce myself and wish her well."

It was around this time that an undergraduate student, Leanda Mason, began to accompany Main on her excursions to the reserve.

To Mason, who was studying to be an ecologist, the reserve looked like an Eden in the blight of industrialized southwest Australia - teeming with species that might not be around much longer.

By now, Main had cataloged hundreds of spiders. Generation after generation. But on each excursion, Mason told The Washington Post, they would beeline directly to 16's door, to visit the spider that never seemed to die.

This became a tradition. On 16's 40th birthday, Mason said, she asked if she could give the spider a mealworm.

"Barbara wouldn't let me," she said. "It interfered with the study."

Main's plan of cataloging a family of spiders having succeeded far beyond her expectations, and she began to look forward to the project's end.

Instead, she said, Main's health declined before the spider's.

The zoologist retired last year, in her late 80s, and Mason, now studying for her doctorate in ecology at Curtin University, took over the spider study.

On Oct. 31, 2016, she went out to the reserve with a drone, hoping to get a bird's-eye view of how this small rectangle of bushland was holding up against the roads and fields.

But like her mentor before her, she went straight to 16 first.

When she arrived at the clearing that day, she noticed that the twigs around the door had lost their meticulous spiral fan shape. They lay scattered in disarray.

Mason looked at the silk door, and saw a tiny hole in the center, as if something had pierced it.

She lifted the door and lowered an endoscope into the burrow, and confirmed what she already suspected. The spider was gone.

A parasitic wasp had likely broken through the seal, and laid its eggs in 16's body.

"She was cut down in her prime," Mason said. "It took a while to sink in, to be honest."

On April 19, Mason, Main and Grant Wardell-Johnson co-published a paper in Pacific Conservation Biology, announcing the death of spider 16 at age 43.

She was the oldest spider known to have existed, Mason wrote, eclipsing the previous record set by a 28-year-old tarantula.

Great Jobs on this post! My New Bots Just gave you a free upvote! mcg6000(.)com/booster

yeah,,,,and thanks to your great effort showing with your comments....