The Watchman and the Affinity of Half Remembered Years

rebeccagransden (25)in #shortstory • 5 years ago (edited)

An action sequence in the series Altered Carbon is soundtracked, briefly, by the PJ Harvey track This Wicked Tongue. Apart from the inherent kickass, the song’s lyrics utilise cosmological imagery to represent an extreme emotional state, with PJ leaping across the vastness of space, straddling stars in a demented fit of abandon. So it goes that I was in turn led to recall a piece of writing from way back, forgotten but for PJ’s wailing. A short and unformed story, written for a percentage of an exam paper, hurried at the time, kept all these years, left innocent and raw somewhat, although tidied a smidgeon, to make a little more readable, without shame of exposure of incompetence, the years a buffer zone enough to sentence a removed former self, or concession. It interests me to look at artists I have an affinity with and observe how frequently synchronicity and coincidental overlap of not just theme but more frequently than is reasonable very specific incidences unknowingly and unintentionally come close to plagiarism. Sometimes word for word for word. The story ends quite abruptly as time ticked the exam to a close. This story is much younger me, and unedited. In the Beginning the watchman surveyed the stars with little regard for them. The blue mists surrounding them obscured their brilliance. It was a nothing; the stars stagnated in a time without time. They knew nothing of quantum physics, of the stuff that made them. All around them was the hint of consciousness but always just out of reach. Their dream was real but not eternal as time had not yet let loose her fury.

Then the Beginning ended. Being what it was it stopped with no great cataclysm but with a beautiful fizz which echoed and reverberated from one star to another. The first entity to appear was a moth. With magical physics it jumped from star to star, jumping on them and making them heat up and spin. As its wings fluttered, the heavens became full of debris which caught in the star’s new gravity. When it was finished with the excited play of discovery the moth settled in the darkest corner of space, waiting for the stars to project their violent heat.

At the other side of the heavens an eel had formed from the blue mist. Its eyes were the largest that have ever existed but had no reflection as he was an absorber of light. As he travelled he pulled and twisted the stars; made them swell like big red balloons or shrink to a pinpoint of blackness. Now time had awoken, light could travel. And so could the eel. He soon found that the best way to grow was to curl round a star and wait for it to burn out. The energy the stars gave him made him strong enough to fill one side of the heavens completely. As he grew he devoured more stars and more light. This was not night, for that can always be escaped, but a consuming eternal darkness.

Meanwhile the moth had been woken by the dazzling of the stars on her side of the heavens. She blinked and blinked until the wonder of light was revealed. Each star cast its own shaft and each shaft criss-crossed the next, leaving a forest made of light. Colours had been created and they glowed and emanated from every direction. The moth was drawn to the light and with one mighty push she ejected from her slumber and glided, strongly and freely, through the field of light. At that moment joy was created and the heavens hummed with this electricity.

The eel unfurled his body, his smooth skin baked metallic by the stars that were his sustenance. The hum had roused him and at that moment curiosity was born. He followed the stars, weaving and gyrating through the heavenly bodies on his way. The moth was too happy to notice him and celebrated obliviously as he zoomed in closer. She turned, and as she did so caught sight of the eel’s massive eye. Not knowing what it was (and catching the newborn notion of curiosity) she flew to the eye. It was difficult to see. Having no reflection, the dark fuzziness of its pupil was a mystery to her. She tapped the eye with her antennae and waited. The eel reared up, almost knocking itself out on the roof of the heavens. The moth looked at him and at that moment fear was created. With instinct drawn up from some unknown place, the moth began to flee. Frantically fluttering it sped through the star field, the eel crashing, bumping and showing his weight behind her in full pursuit.

She came upon his domain. The darkness tired her; she was beginning to fade and lose momentum. She could hear the low rumble of destruction the eel was committing on his way to her. She thought she could hide but surely he would find her in his own realm. All the while she thought, the eel was drawing closer. Searching the darkness she found stars, swollen and near death; hot and uncomfortable, and drained of their life. She viewed these waning husks with the knowledge that curiosity brings and in that moment sorrow was created. But at the same time anger and revenge came into existence. With these in her blood her desire to survive became stronger and swelled to an uncompromising size.

The eel had arrived. With his eyes dead as a predator’s he looked over his darkness, hunting the moth. He moved with precision, every cell focused on his task. The moth lay in wait behind a barren moon. She could see the mass of his grey body writhe around the rocky, desolate remnants of his destructive spree. As he moved in closer she burst forth from her cover and swept up behind a black hole. With the knowledge she had gained from her time immersed in light she tried with all her might to subdue the raging black pinprick. With one incredible heave she dislodged the hole and held it. Taking position in front of the still determined eel she pointed the black hole straight at him. He contorted in agony as the light that he had consumed was sucked mercilessly from him. He crackled with violent electricity, and in that moment lightning was born. The moth held on with strength only revenge can create, and the eel shrunk and shrunk and screamed and shouted its way back to its original size.

There was a deafening silence. Then the moth let go of the black hole, which flew back into darkness. The eel slithered its way to a quiet place and the moth sighed with regret and remorse. The moth felt lost and alone, all joy had gone from its heart. In that moment innocence had been lost. But something shook the moth from her despair. She held her head up. The far off twinkling of light. The stars were calling her home. 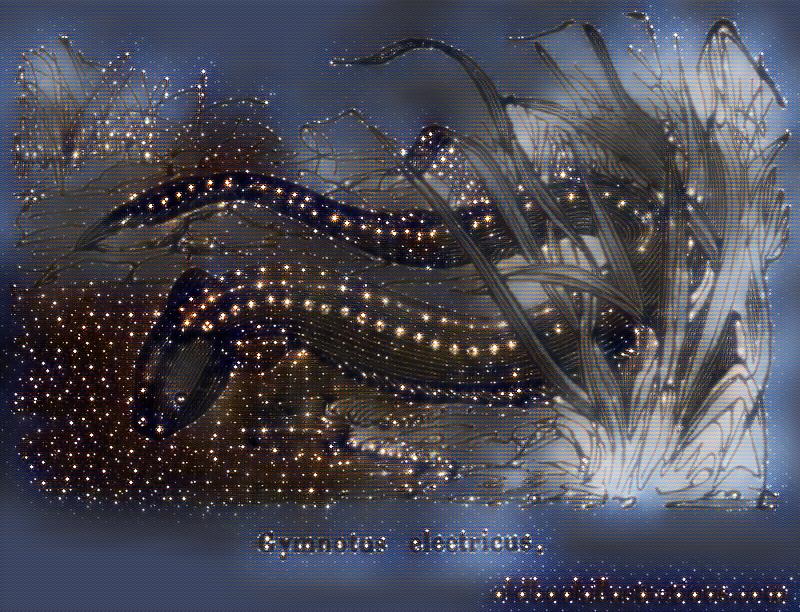 The debris left by their battle became the planets, moons and asteroids of the solar system; and the lightning created spurred into existence the first life on earth. To this day the moth chases light and the eel feels its electricity. Both are reminders to them of their place and the need for the balance of dark and light.

Thanks for reading Bernard :)