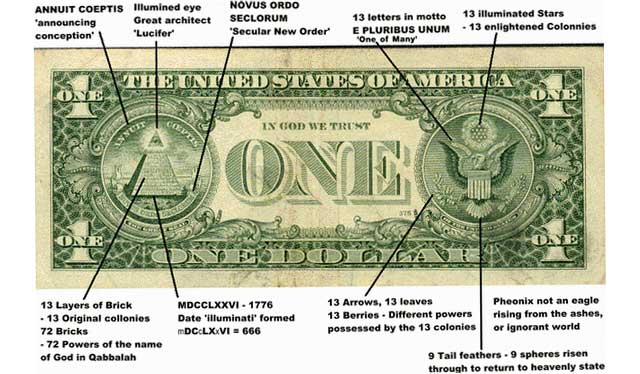 Hi friends, have you ever heard of the Illuminati? Me it happened to me already because I look a lot of films, it seems to me that I heard about it in Da Vinci Code with Tom Hanks and also in Benjamin Gates with Nicolas Cage.

I love the stories of secret societies, hidden treasures and hidden codes or designs that indicate a course of action or a place to visit, I find it thrilling!

The Illuminati would in fact be the Illuminati of Bavaria in Germany, a society of thinkers that had been dissolved in 1785 would have survived clandestinely to this dissolution.
They say they have a plan to dominate the world by infiltrating the various governments and other initiatory societies including Freemasonry.

The term Illuminati is actually a generic term for groups of conspirators such as Freemasons, Zionists, CIA, secret societies, ... The Illuminati conspiracy theory states that some of the founding Fathers of the United States, some of whom were Freemasons, were corrupted by the Illuminati. This theory is still maintained today and some consider that the influence of the Illuminati on the American government is through the student fraternity of Yale University, the brotherhood Skull and Bones (it would be in fact a secret society) ...

On the dollar bill is printed the symbol a pyramid whose summit is illuminated by the Eye of Providence.

Above this symbol is written the motto Annuit cœptis ("he approves this enterprise") and below, Novus ordo seclorum ("new order of the centuries"). The MDCCLXXVI entry in Roman numeral at the base of the pyramid corresponds to 1776, the year of the declaration of independence of the United States.

However, these symbols have already appeared before the Illuminati. The eye in the triangle is a representation of a God from the Renaissance and the pyramid represents the new nation that is supposed to last for centuries, unlike the pyramids of Egypt. The eye of the
Providence represents God watching over us.

Conspiracy theorists claim that these symbols are examples of the Illuminati's presence and power. Indeed, the seal displays a lucid eye, which would represent the culmination of enlightenment, knowledge, dominating a blind base, would be the symbol of an elite controlling the people, the inscription Annuit cenptis would be the cry of victory of the conspirators and Novus ordo seclorum would indicate the new, rebellious, independent regime of the Church; the mention MDCCLXXVI would return, it, the year of the foundation of the Illuminati of Bavaria, masters secrets of the American government.

When on photos or in videos of political personalities or the celebrities, we see appearing a triangle or an eye, the theorists think that these people belong to Illuminati.

So, is our world secretly ruled by the Illuminati and our politicians just puppets? I would not have a hard time believing it, I'm sure there's a lot going on behind our backs as a poor little citizen who does not rub shoulders with all this beautiful people ...

Trump would it be under the influence of the Illuminati too? Would he just play a role in diversion? 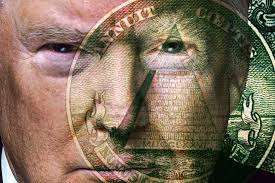 Oh yeah, I remember when I first discovered this and looked at my dollar bills. Crazy right? Thankfully, we now live in a world with cryptocurrency and are bringing more power back into the hands of the people!

I am fascinated with various conspiracy theories, this being one of them. I think that there could totally be a ton of behind the scenes mischief going on. Maybe not to the extremes of an “illuminate” but I feel like we, the average citizen, only know a very small portion of information regarding politics and what’s going on in the government.

me too I really wonder if this Illuminati thing already existed or is existing in our time.

I love the passion you show in this post and I share your opinion always seems that there is that "puppeteer" who manages the threads in the shadows for their purposes, the influence of organizations that have years of existence is a fact where they always seek to maintain order for their own purposes

I have been reading a lot about this,, and I read that the biggest and wealthiest families in the world are financing them and they are part of them as well, even the major political regimes in the world have strong relationship with them. they control even the biggest news channels maybe thats why we never sow or heard anything about them in TV.
this makes me believe that we are fully controlled by someone we dont even know. Illimunati was the most digusting topic of 2017 :D

The elite accentuates its power every day and subjects the masses to total slavery, the solution to all this is bitcoin and cryptocurrencies. It is time to end the neofeudalism imposed by the US empire and the Western states.

Nice information, I learnt a lot about this group. Wow just keep going

Conspiracy theories are very interesting and i totally enjoy them!

Exposing Illuminati!!! but Realizing that 1% control the wealth of the whole world is the thing that has to be highlighted so that people know whats going on

Thanks for the insight.

I first read about the Illuminati in Dan Brown's Angels and Demons and boy was I intrigued. Who does not love conspiracy theories and secret societies? They make great material for novels and movies

I wonder if all these conspiracy theories are true. That would be very interesting.

I’m quite a fan of conspiracy theories and I think your post is eloquently written. It’s quite mind blowing frankly ... upvoted you for this crazy, detailed piece @lndesta120282

And now they've taken over Taco Bell. We always called it Taco Hell, lol. We thought it was just because it tore our stomachs up.

I have seen this a few times, IDK, it's probably just a bunch of coincidences, when you make a 1000 things one of them must have something that can be iluminati- like.

Great article, the term Illuminati comes from illuminate - (enlighten). A reference to the sun cult.
However, the Illuminati are now more of a cover to distract from the real people in the background such as the Jesuits or Freemasons.

Congratulations, your post received one of the top 10 most powerful upvotes in the last 12 hours. You received an upvote from @glitterfart valued at 240.28 SBD, based on the pending payout at the time the data was extracted.

These people have a hierarchy system which has an elite group, they are who decide any small move in governments and nations.

I love conspiracy topics and if you love more of these, do check "Shane dawson" channel in youtube. I just love these kinds of topics. Followed you <3

I remember when I first discovered this and looked at my dollar bills. Crazy right? Glad to see you sourcing your text.

I hope there are so many people concerned about me, I know this is just a dream.

I didn't know lots about them before, but I think Dan Brown made it a really popular topic with his books. :)

The story about the Illuminati and the different symbols that have been made in history are very interesting and impressive at the same time, especially because literature expresses that even today they exist in the shadow of all powerful men like the Masonic lodge. Regards Indesta120282