Fish in schools can take it easy 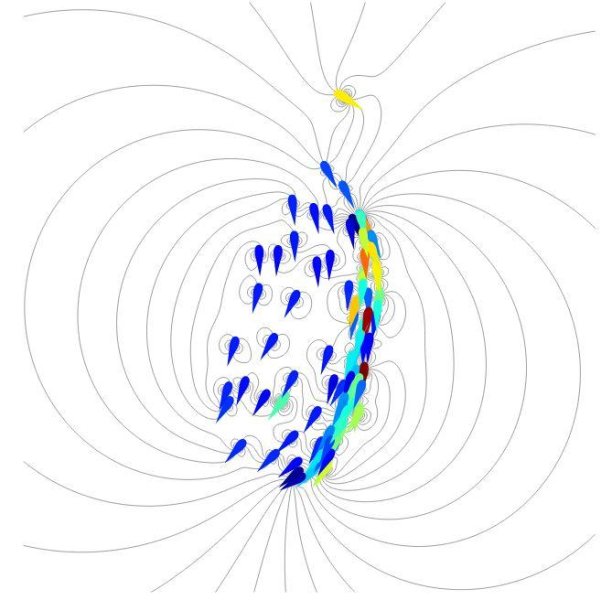 Schools of fish provide a fascinating example of collective behaviour in which the group moves in a coordinated manner without the need for a leader. In the past, many computer models have shown that such collective motion can emerge from simple rules: each individual tends to align itself with its neighbours and move towards them while avoiding collisions. However until now, no research into the role of water flow between fish had ever been carried out.
To investigate this question, a group of fluid mechanics specialists at the Institut de Recherche sur les Phénomènes Hors Équilibre (CNRS/Aix-Marseille Université/Centrale Marseille) and physicists at the Laboratoire de Physique Théorique (CNRS/Université Toulouse III-Paul Sabatier)1 developed an original model that incorporated flow dynamics within a school numbering hundreds of fish. The path of each individual is governed by classic rules of attraction and alignment, as well as translation and rotation effects caused by the flow generated by the other fish.

The new model revealed a surprising effect of the interaction between the fish and the fluid surrounding them: when swimming in schools, fish expend less energy due to a 'suction' effect produced, on average, by all the fish. This advantageous effect of schools had already been hypothesised, although it was thought that the fish had to be positioned in a highly specific configuration to benefit from it. Here, the researchers showed that the effect is present even when the group of fish appears to be disordered.

The research team now plans to refine its model so as to incorporate other factors that affect the dynamics of schools, such as the vortices that fish produce in their wake.