Last week I shared my first Steemit post: my introduceyourself post (which you can find here: https://steemit.com/introduceyourself/@stumcm/my-name-is-stuart-mcmillen-and-i-m-a-cartoonist) about my comics and cartooning. Today I’m sharing with you the first comic I was proud of : St Matthew Island.

I care about environmental sustainability, and I used non-fiction comics to capture a real-life scenario that illustrates the problems of overpopulation and resource depletion. It is an 8-page comic that will take you about 2 minutes to read (which you can read directly on my website at: http://www.stuartmcmillen.com/comic/st-matthew-island/).

Below, I am sharing the pages of the comic intermixed with my “director’s commentary”, highlighting interesting features of the artwork. You can choose to either read all of the images at once, or you can interchange between the images and the commentary. Depending on your reading style. 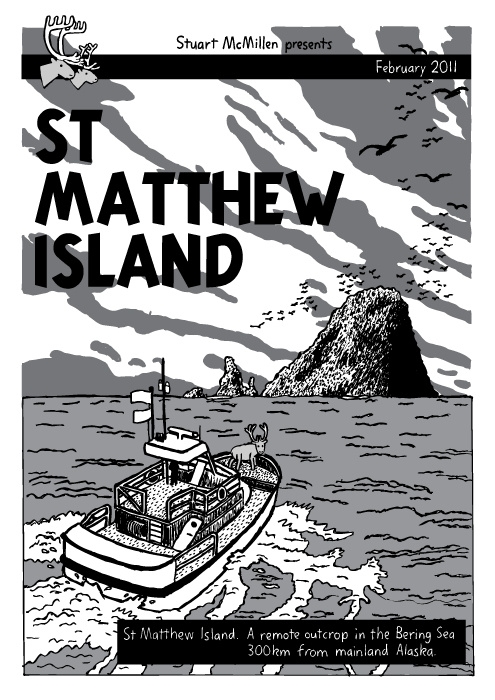 Yes, this pageis a Tintin homage. It is a reference to Hergé‘s Tintin comic The Black Island.

I replicated the layout of the cover of The Black Island, because I wanted to amplify the mystery-factor of this comic. I originally heard about the case study of St Matthew Island when reading Natural Capitalism by Hawken, Lovins and Lovins. There were only a few sentences about this scenario in the book, but it really piqued my interest and I looked deeper into it and found a fascinating situation that could be told very well through the medium of comics. When researching this comic, I was keen to make my artwork as realistic as possible. I found photos of the LORAN buildings from the island. For the sake of accuracy, I also was keen to learn which of the four subspecies of reindeer was introduced to the island. This mattered to me, as they all have different looking antlers. I found that the actual subspecies of reindeer was the Porcupine caribou. Their horns really grow like that on both male and females. 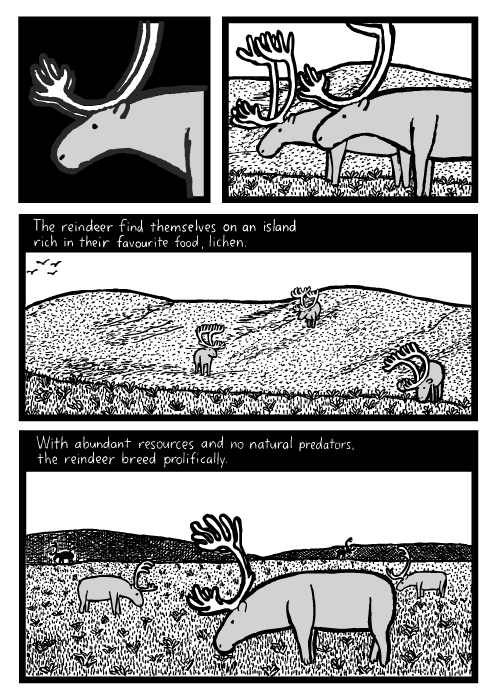 As a storyteller, I liked using the reindeer as the ‘stars’ of my comic because they are easy for readers to identify with. Unlike other animals, readers become invested in the story of the reindeer. (They were also a ton of fun to draw!) That middle panel was a fun panel to draw, as I wanted to convey the sense of the researchers spotting the large reindeer herd that had bred over the last 13 years. I wanted each of the reindeer to be doing it’s own thing, and I got to experiment a little with the antlers. 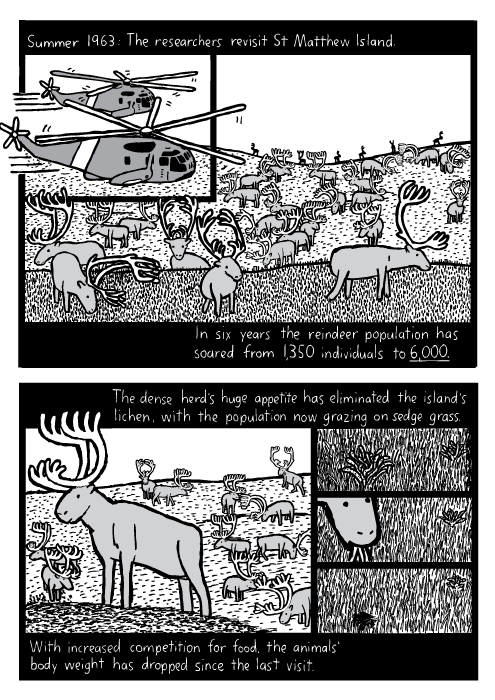 By this stage, many readers imagine how this story is going to end up... It’s not going to be happy, but let’s press on with the rest of the story. Yes, the herd really did drop down from 6,000 to 42 in one winter. With my artwork, I drew the reindeer skeletons in a more detailed and realistic style than the cartoony living reindeer. This comic was drawn with pen and ink on paper. 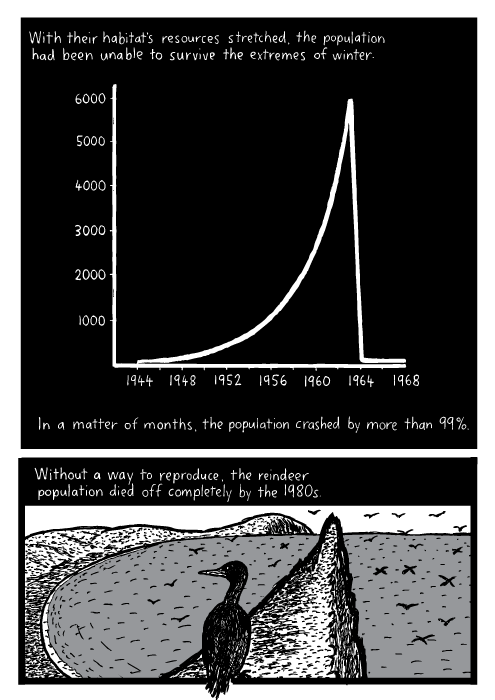 Different people learn in different ways, and I wanted to include a graph that summarises this entire scenario. This page is designed to be stark and barren, compared to the images of cartoony reindeer that came before. At the end of the day, I wanted the reader to remember the main points of the story rather than the statistics accompanying it. This graph summarises the entire scenario at a glance. I decided to end it like this to try and make the reader think about what the reindeer are a parable for.

You can read the comic in one clean line here: http://www.stuartmcmillen.com/comic/st-matthew-island/

Below, I’m happy to answer your questions about this comic. I’d also like your feedback on whether this interspersed ‘director’s commentary’-technique of displaying my comics is useful to you.

Amazing work! When I saw that first image, even before reading the words, I was thinking "Tintin"! It's really great you are using your comics to tell stories and educate people about issues that matter.

Thanks. As I mentioned in my introductory post the front pages of all of my comics are homages to other works. But the Tintin one of St Matthew Island is the one that tends to get recognised the most.

This is fantastic! I am a high school teacher and my students respond very well to information accompanied by cool comics like this.

As a former scientist, I have found science communication to be such a critical part of the process of doing research. It is fantastic to see people that can combine their language and communication skills with an understanding of science and provide such great content! Hope to see more of your work here soon :)

That was really beautiful on all levels. I must confess I went emotional about the reindeers 😊

That was really beautiful on all levels. I must confess I went emotional about the reindeers

Jeez, this struck me... Glad we humans are smart. Quick, tell me Sir, what's in place to curb overpopulation!
This post is enlightening... I shall make researches on this topic.

This is beautiful work, your comics here really do a good job stimulating the reader to think about our own situation. Even before you directly pointed it out my mind identified your intention. Strong material, and it's nice to have your commentary to go along with it. I look forward to you continuing this series.

While reading i went to flashback and remembered my school days i used to read all these comics, same depth i felt with your post thank you so much.

Sad that it ended up that way.. total black swan event. What could've been done to prevent that? Or was it an unknown when before it happened?

I wrote a blog post where I described the ecology behind the St Matthew Island scenario.

It is unclear whether they totally "bred themselves to death", or whether there was a particularly bitter Arctic winter that killed them off.

But the reindeer are often used as a mammal equivalent of the popular analogy of the "bacteria in a test tube", who consume all of the nutrients, and then collapse.

When you really think about it, it's like reindeers represent humans, with overpopulation that slowly depletes the resources, and may lead to our demise.

Yep. That is my motivation for drawing the comic.

The reindeer ran out of lichen. When I drew the comic, I thought that fossil fuels (especially oil) are humanity's equivalent resource that we are consuming.

I think that there are other candidates for resources that we are in the process of exhausting. Such as topsoil getting eroded into the oceans at an alarming rate.

We are also pushing the limits of the atmosphere's and ocean's abilities to absorb carbon dioxide, without disastrous effects (such as global warming, and ocean acidification).

If only we could maximize the capabilities of renewable energy and other alternatilve power sources, we could survive without burning fossil fuels. Then it could impact our environment greatly as it will mitigate the emission of toxic gases directly into the atmosphere.

Congratulations @stumcm, this post is the fifth most rewarded post (based on pending payouts) in the last 12 hours written by a Dust account holder (accounts that hold between 0 and 0.01 Mega Vests). The total number of posts by Dust account holders during this period was 2338 and the total pending payments to posts in this category was $1176.06. To see the full list of highest paid posts across all accounts categories, click here.

Congratulations @stumcm! You have completed some achievement on Steemit and have been rewarded with new badge(s) :

You are doing a great job and with your comics you are really describing the environment that we need to protect. Keep doing the job :)

Really interesting article, keep it up with great work :)