THE UNKNOWN FACTS ABOUT KOLAM!

Kolam is a famous traditional drawing pattern in villages in Southern India. It was done using a rice flour with some colour dip in it or mostly in plain white. 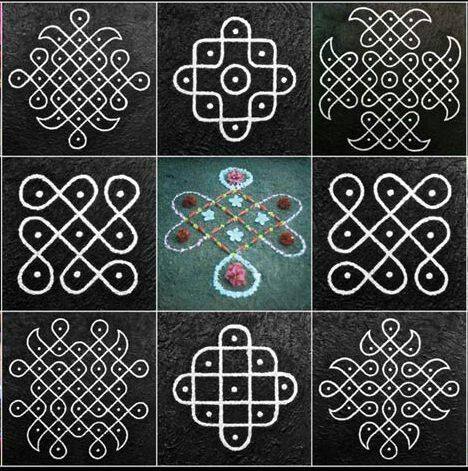 An experiment has been conducted to find out how simple village women (very often not literate) store such complicated patterns in their memory and retrieve them with ease while drawing the Kolam.

In the course of the study, it was found that the kolam practitioners remember , describe and draw the designs in terms of 'moves' such as 'going forward', 'taking a right turn', 'taking a U-turn to the right'
and so on, reminiscent of the 'interpretations' which are used in COMPUTER GRAPHICS as sequences of commands which control a 'turtle'. Treating each other kind of a move as a terminal sign, each single kambi kolam represent a 'necklace' or picture style. Thus kolam
designs provide us with illustrative examples of a variety of patterns including several picture cycle languages.

This particular sentences were taken from
the Book A Perspective in Theoretical Computer Science
By Dr. Gift Siromoney

-The mathematical properties of Kolam are being used in the computer science field.

-Kolam patterns are studied and algorithms are developed for regenerating kolam designs with different patterns has been done.

-Algorithms for drawing kolams are used in development of Picture drawing Computer software.

-Kolams are used for research in the Computational Anthropology.

-As Kolams have a strong relationship with contemporary art and art history, they are used in the artwork and media field.

-Kolams are also used to simplify the representation of complex protein structures for easy understanding.