Instead of writing about a project today, I'm going to be going over the basics of different types of ionizing radiation detectors that a hobbyist might find themselves building. That means it is at least somewhat doable (if you have electronics experience) to build everything in this post with a couple hundred dollars total (less than $50 total if you exclude the last detector). I have not personally yet built everything here, but I've studied them quite a bit and I hope you'll be able to learn something new! 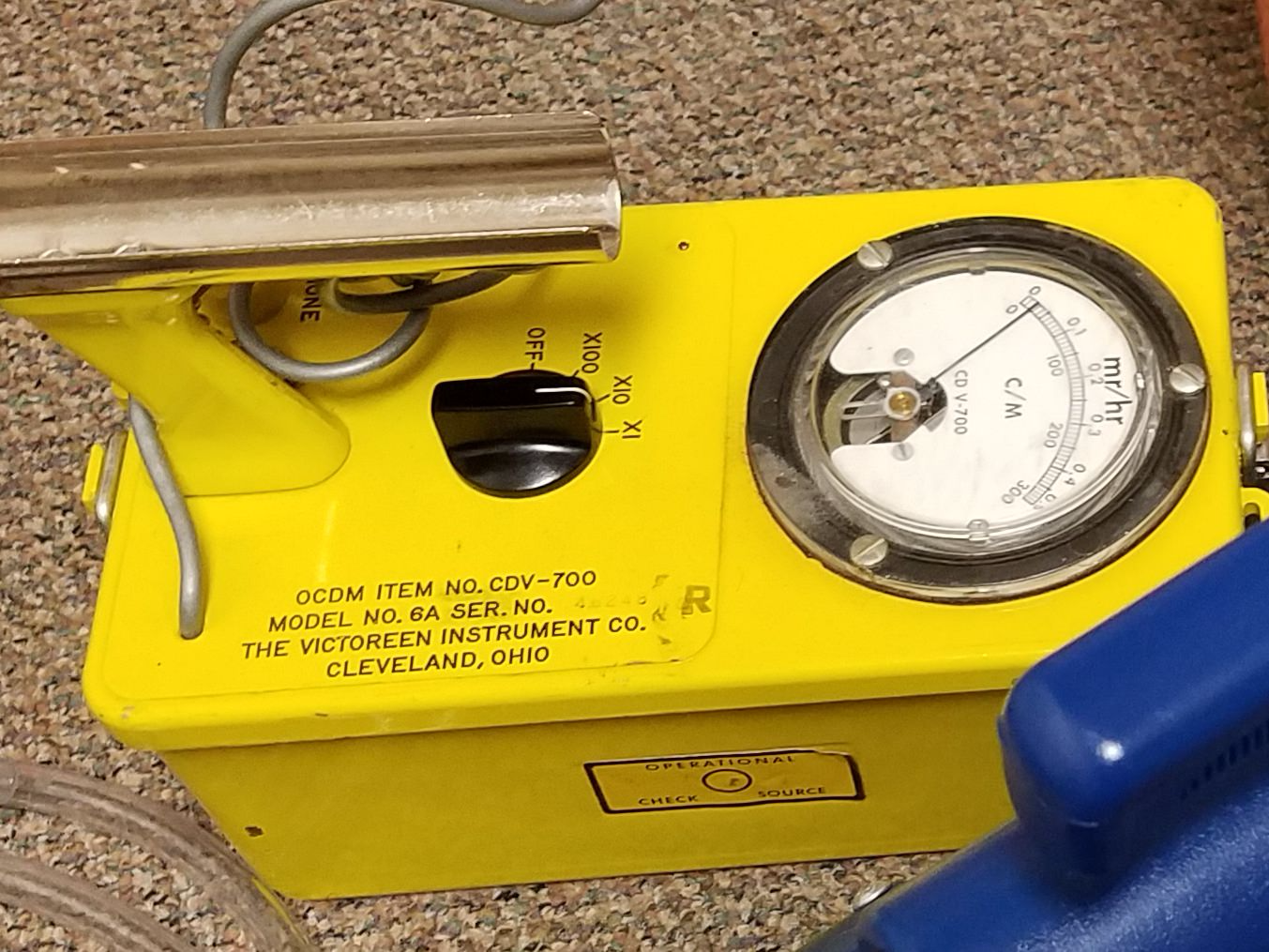 The basic component of a Geiger counter is a Geiger–Müller (GM) tube, which is a (typically metal) tube containing a pressurized inert gas. Two conductive terminals span the tube but do not touch, such that the tube doesn't conduct any electricity under normal conditions. However, when radiation strikes the gas, this changes. Remember that the only radiation we care about right now is ionizing radiation, because this is the only kind of radiation that can damage cells, initiate nuclear reactions (sometimes), and the like. When ionizing radiation enters the tube, it can ionize neutral gas atoms inside the tube. This produces a electron - ion pair that will quickly re-neutralize.

(Image credit: www.rhelectronics.net): This is a SI-3BG GM tube, and is a very cheap option (<$5) for building your own detector.

But, if you apply a high voltage (typically several hundred volts) to the terminals on either end of the tube, the produced electron will accelerate across the potential. Since the pressure in the tube is somewhat high, the electron will strike and ionize many other atoms before reaching the final terminal. This results in a cascade effect where one ionization event can produce many low energy conduction electrons that allow current to pass through the tube. This produces a current spike through the circuit, which is detected and the detector outputs sound, light or something else to tell you that it detected a particle of ionizing radiation. You can read more about this effect, called a Townsend Avalanche, by clicking here.

In this way, a Geiger counter can detect essentially all types of ionizing radiation. The limiting factor ends up being the material the GM tube is made out of: A thick metal tube is going to block all alpha radiation and most beta radiation while allowing through high energy gamma radiation, for example. My 1960s Geiger counter, the CDV-700, can detect beta and gamma radiation easily with its metal shield open but cannot detect any alpha radiation. My homemade Geiger counter using a SI-3BG tube (see the above image for this tube or my profile for the writeup) picks up less beta radiation than the CDV-700 due partly to having a thicker GM tube. Here's my homemade detector: 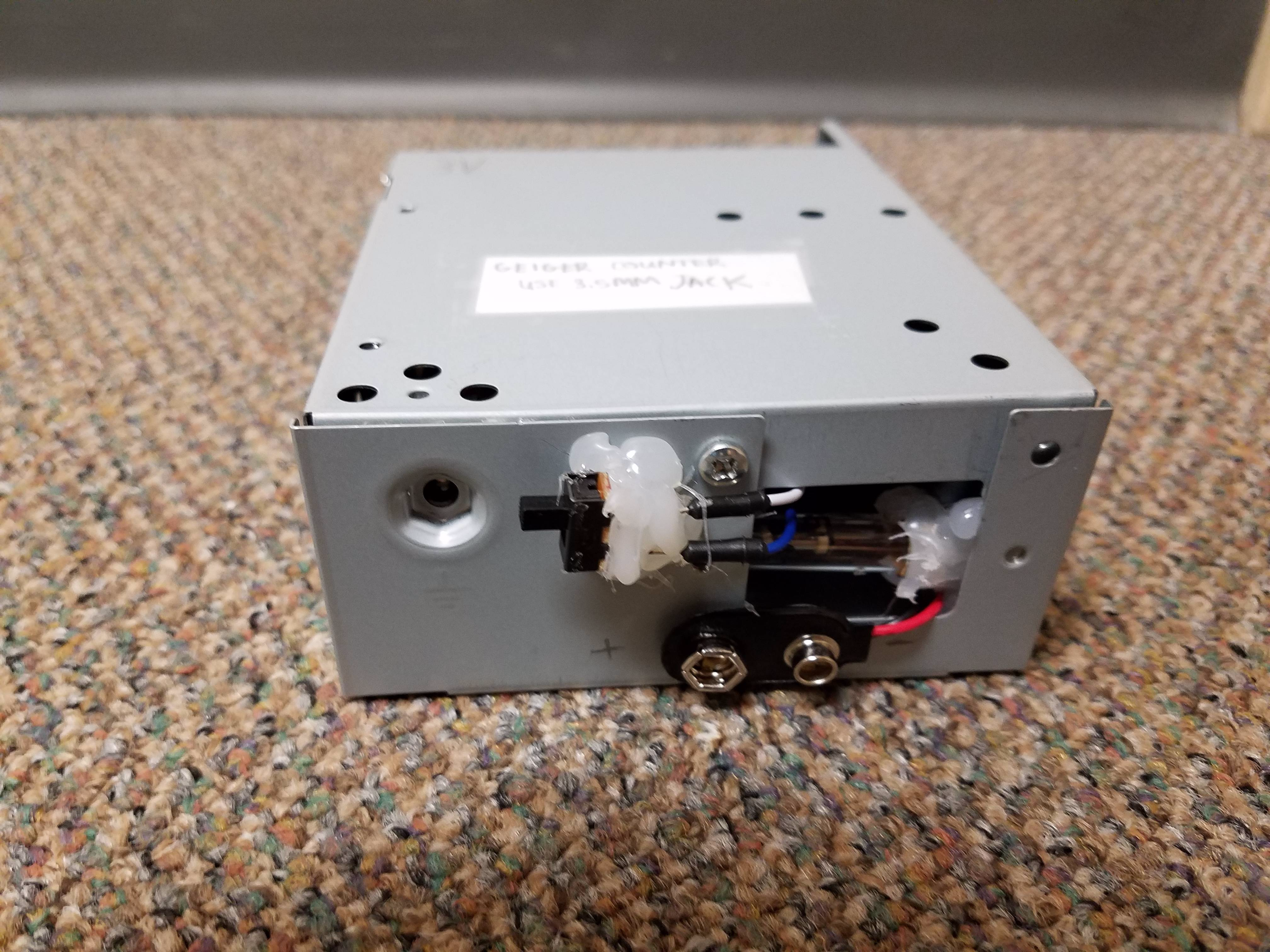 If you're willing to salvage old parts, you can build one for less than $15 (although it won't be that great for that low of a price). If you instead want to buy one, there are currently Geiger counters from Ukraine selling on Ebay for $30.

Ion chambers are very similar to Geiger counters but are usually way less expensive and less reliable. An ion chamber works by detecting tiny current changes in a gas chamber at low voltage. It's this low voltage requirement that really sets them apart from Geiger counters, which usually operate at hundreds of volts.

When radiation strikes the air inside the chamber, it can once again ionize neutral atoms. This time, the free charges produced by these radiation events are the only significant charge carriers that can convey current between the electrodes, because the high voltage necessarily to amplify the electron stream into a Townsend Avalanche is not presence. Because of this, ion chambers are typically not very sensitive. While they can detect any type of radiation, they are usually used to detect gamma radiation. On Ebay you will find many detectors called "CDV-715"'s that look very similar to the Geiger counter above, but are extremely cheap and are actually ionization chamber detectors. These CDV-715 detectors can only detect gamma radiation due to internal shielding and will only go off if so much gamma radiation is incident on the detector that your life is at risk. Ionization chambers are probably the cheapest detector you can build. If you already have a multimeter, you can build one using just a transistor, a can, and a battery (but the detector won't be very good). If you'd like to build a radiation detector on the weekend, I recommend looking up DIY ion chamber schematics online. You can find designs ranging from crude can devices where you watch the multimeter for events to handle chamber detectors that beep when radiation is detected. Notably, ion chambers are probably the easiest way for a hobbyist to detect alpha radiation without resorting to an expensive Geiger counter.

Cloud chambers are containers of air supersaturated with alcohol vapor. When charged particles travel through the chambers, they leave tracks of condensed alcohol that you can physically see with your eye. You can then pick out different types of particles based on their track widths and length. You can even see cosmic rays using these devices, and sometimes see muons (or other particles) decaying into lighter particles.

Cloud chambers are also very easy to make if you aren't too picky. Dry ice, isopropyl alcohol, and a box are really all you need to make a crude cloud chamber. These chambers also work very well for picking up alpha radiation, and placing a smoke alarm Am-241 source inside one will result in many visible alpha tracks.

This is a project I want to do sometime, but haven't gotten around to yet because of the short shelf life of dry ice. If you have more money to spare and want to build a reusable chamber, you can use a thermoelectric Peltier element to cool down the chamber.

Cloud chambers are responsible for many of the early discoveries in particle physics because they allow essentially anyone to cheaply witness extremely high energy reactions from incoming cosmic rays and muons. Shown below is the image that resulted in the discovery of the positron (antimatter electron), taken in a cloud chamber: 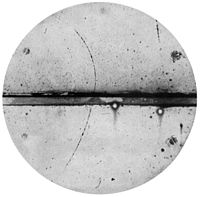 In a previous post I mentioned betavoltaics, where a beta particle strikes a semiconductor PN junction and produces a current spike. This is essentially how a photodiode detector works. By placing a photodiode (essentially a tiny solar cell) in the path of radiation, one can detect a wide variety of radiation types. These devices require a little more circuitry than the last three detectors I listed, but they are still very hobbyist accessible, and many schematics can be found for free online. I personally haven't yet gotten mine to work, but I plan to continue to working on it soon. (Image credit: https://au.rs-online.com/web/p/photodiodes/0303719/): A typical photodiode with a casing. To use this in a detector you would have to prevent any light from reaching the junction.

While a photodiode detector can theoretically pick up any type of ionizing radiation, the fact that visible light also triggers the photodiode (think solar panels and LEDs) makes it extremely difficult to detect alpha radiation, since any necessary light shielding will almost certainly also block the vast majority of alpha radiation from reaching the detector.

You should be able to build your own photodiode detector for around $20 if no issues arise and you already have some DIY electronics equipment (soldering iron, multimeter, etc). A big advantage of photodiode detectors over Geiger counters is a lack of pressurized gas and high voltage shock risk.

This detector is pushing the limits of what I would consider "hobbyist accessible". This detector works by utilizing a tube full of pressurized He-3, a somewhat rare but stable isotope of Helium. He-3 has a very high cross-section (basically reaction probability) for incident low-energy neutron radiation. Neutrons have no charge, and so only interact via gravity, the weak force (beta decay) and the strong force (neutron capture, fission, etc). When slow neutrons enter the tube, they react with the He-3 to produce a proton and a Tritium nucleus. These ions then conduct current through the tube (as with the Geiger tube) and the resultant signal can be detected.

But where to get Helium-3 tubes? He-3 is quite expensive, and buying a He-3 tube new from a lab supplier would be absurdly expensive. Thankfully, the Soviet Union has come through for us (that might be the only time I've ever said that), by mass-producing these tubes before its collapse. Somewhat usable He-3 tubes are now sold on Ebay in decent quantities for a couple hundred bucks a piece.

The trouble here is that the circuitry necessary to do this is likely going to be expensive and has to be fine-tuned to actually work. I've seen schematics for DIY neutron detectors using He-3 tubes online, but it takes a lot of work to get one to work. I've personally never done it, and this isn't something I would undertake unless I was building a fusor, since it requires several hundred dollars and a ton of time/expertise, and neutron radiation is very uncommon unless you are doing nuclear fusion or have a massive alpha source with beryllium metal. See fusor.net if you're interested in building one of these detectors.

You can read more about neutron detection by clicking here.

Thanks for sticking around for this post. I hope you were able to learn something new! Of course, I was unable to go over every possible radiation detector that someone can build on their own, but hopefully this was a somewhat educational overview. If you've got any questions on this subject, feel free to ask in the comments and I'll do my best to answer.

Images not credited are my own.

This is amazing!!! Those GM counter i found on web is crazily expensive!!!
Btw i had once cameacross those superheated gel for neutron detection, which seems to be a convenient detection method too XD

Oh I had totally forgotten bubble detectors!! Yes those are probably the cheapest way to pick up neutrons without really high neutron flux, but they are only good for a few uses and still cost a lot. Thanks for pointing that out!

Congratulations @proteus-h, this post is the sixth most rewarded post (based on pending payouts) in the last 12 hours written by a Dust account holder (accounts that hold between 0 and 0.01 Mega Vests). The total number of posts by Dust account holders during this period was 4681 and the total pending payments to posts in this category was $561.46. To see the full list of highest paid posts across all accounts categories, click here.

Congratulations @proteus-h! You have completed some achievement on Steemit and have been rewarded with new badge(s) :