Each of us wished upon a shooting star. Today you will learn why some of these wishes have not come true. Spoiler: it wasn't stars. 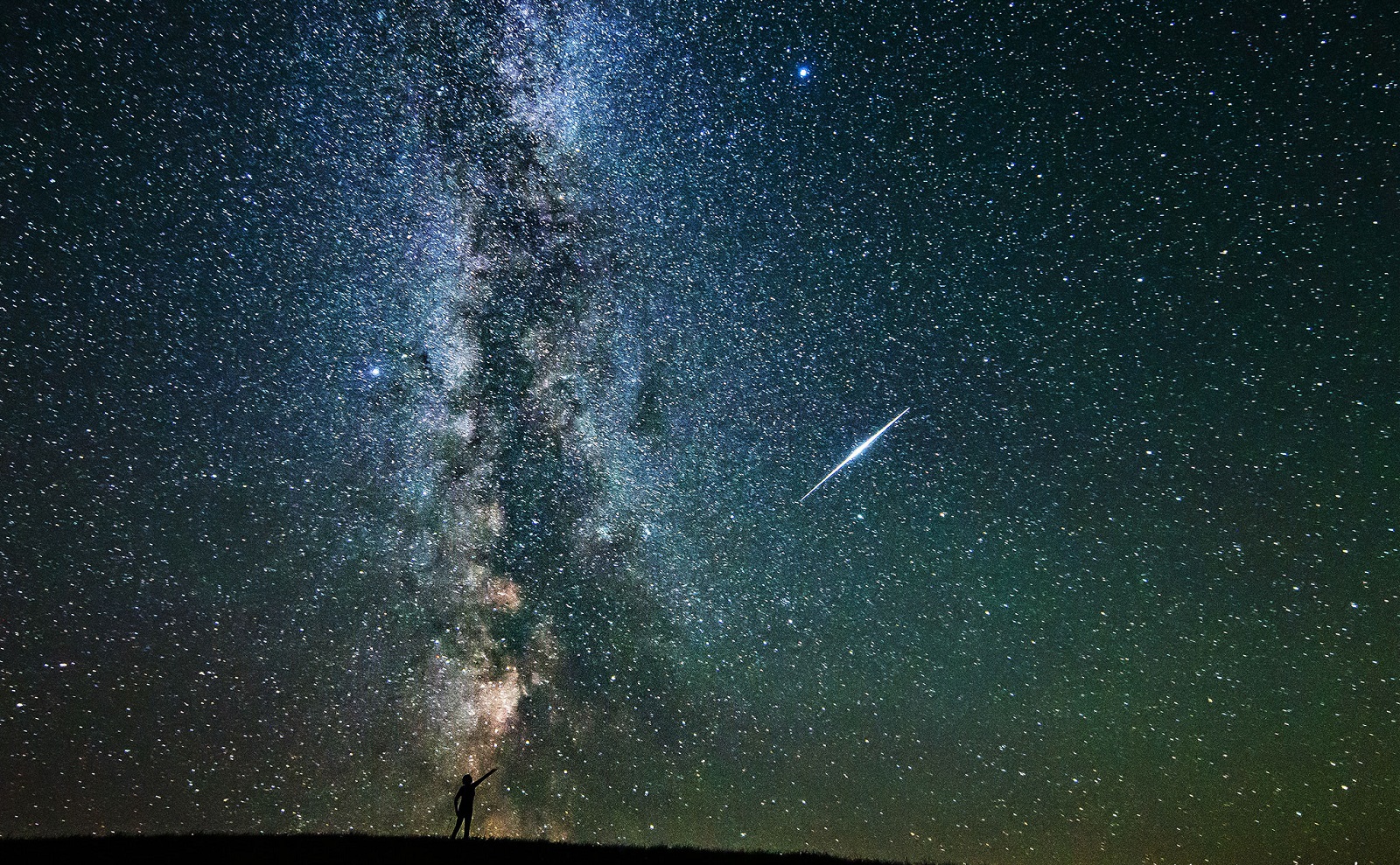 The Iridium project was planned in the 80s by Motorola. Its task was to provide cellular communications on 100% of the surface of the earth. For this purpose it was planned to use 77 satellites (it corresponds to the atomic number of the chemical element iridium), but in the end used 66 satellites, the first of which was launched in 1997. Satellites are on orbit height 780 km (for comparison the ISS is at an altitude of 350 km). Orbital velocity is about 27000 km/h, full orbital period around the earth is 100 minutes. Each satellite weighs 700 kg and is equipped with three antennas with lengths of about 2 meters.

These antennas are the cause of bright flashes on the sky, which are often confused with the falling stars. 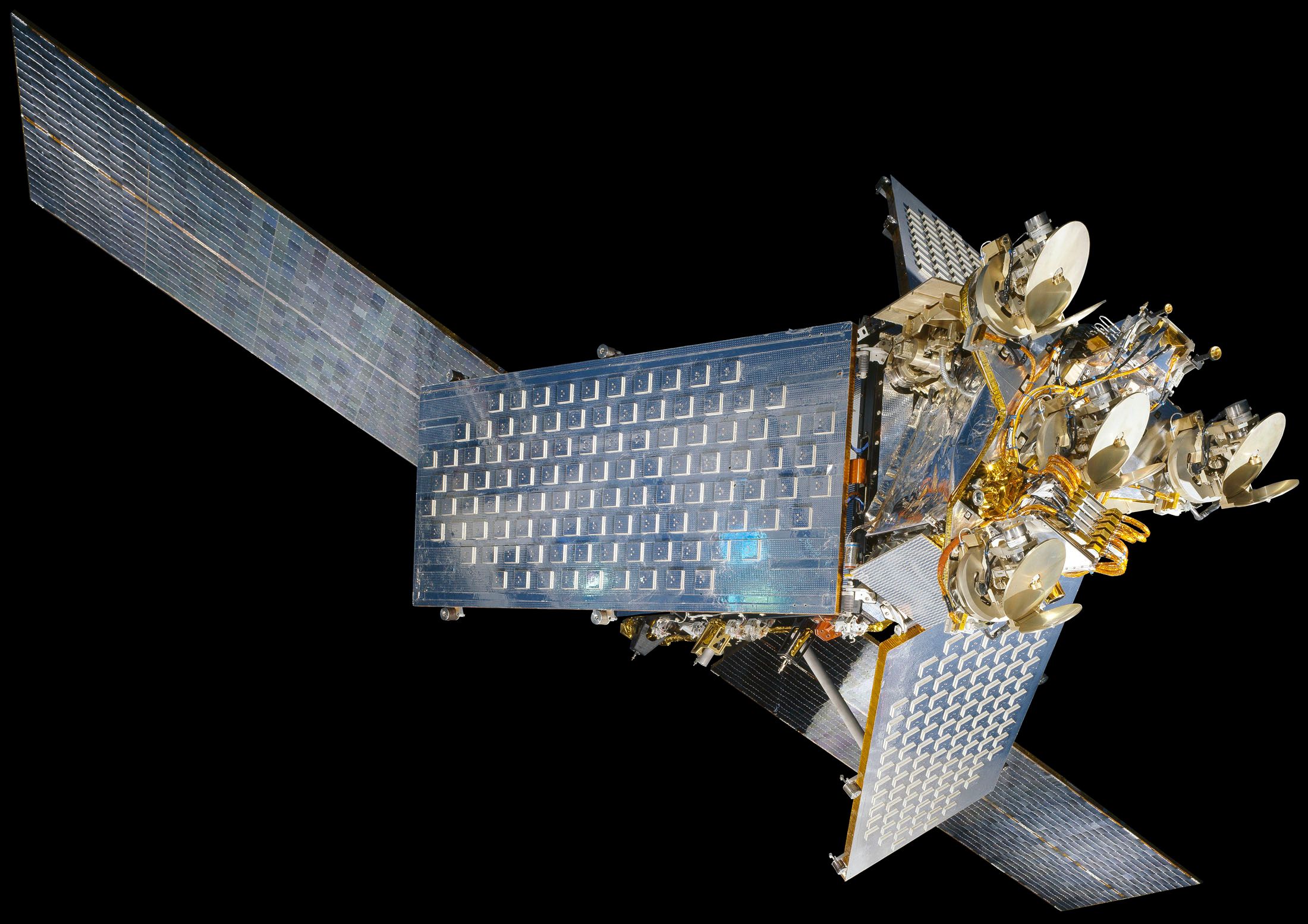 Antennas have silver plating, for thermal control. Falling on the surface of the antenna, the sunlight reflected on the earth. The brightness of such flashes can have a magnitude of -9.5 (astronomical brightness value). Sometimes these flare can reach 10 km in diameter, each flash lasts for 10 seconds.

Iridium flares is the third brightest object in our sky. First place- Sun with magnitude of -27, second place full Moon -13. 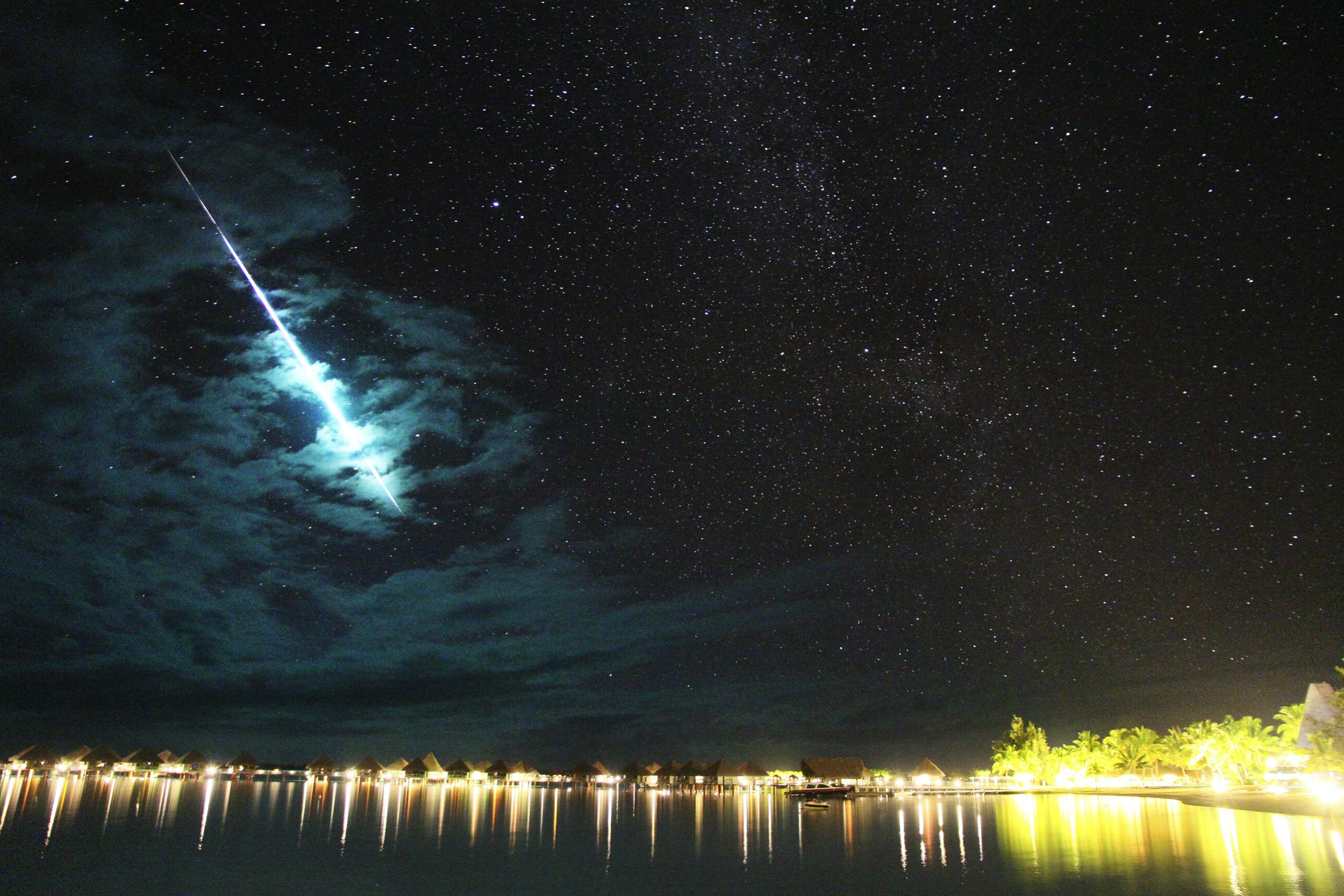 And the most interesting: you can observe this phenomenon from any point on earth, and you can easily calculate the location and time of the next Iridium flare! The trajectory and location of each of the 66 satellites are known with high accuracy.

These data are used by many sites and applications, the most convenient is: Heavens Above

In Configuration choose Change your observing location. You should accurately point your location, or coordinates of the place from where you want to see the flare. Correctly set your time zone, is very important!

After saving the settings, select Satellites --> Iridium Flares. Based on your location the site will calculate the exact time and coordinates of the flares in the sky, in the form of a table. 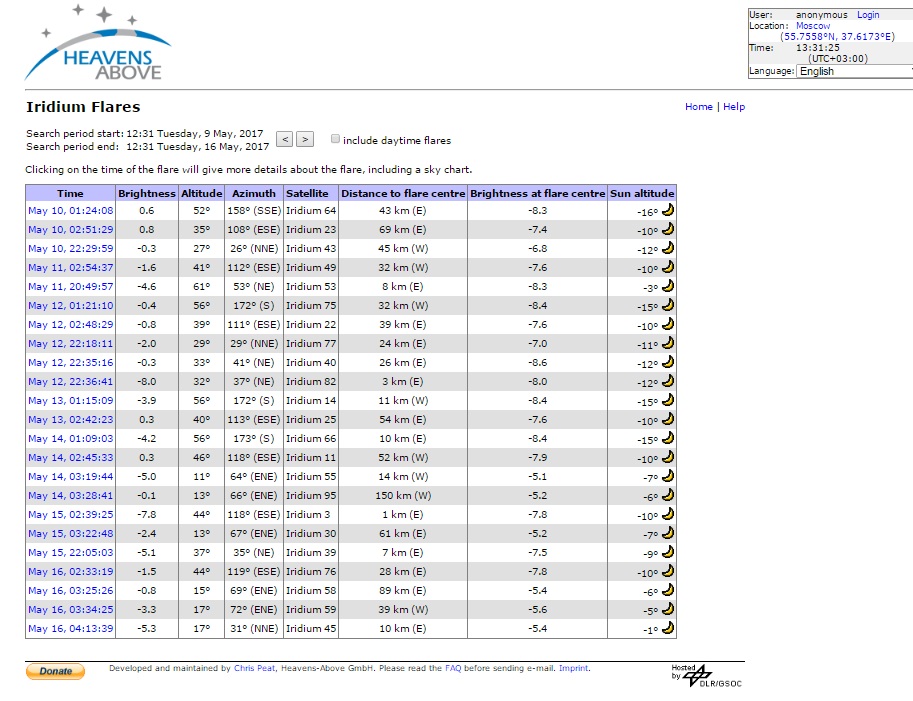 The astronomer can easily understand the data, but we are not astronomers, so let's look at some of these in more detail:

-the bigger the number in this table, the brighter will be the flare (ignore the minus sign). The maximum value of -9.5, this flash you will see even in the daytime, but at night it will look like a meteorite!

But! there is an easier way to determine the direction of the flash: Click on the table you will see a map that shows the path of the satellite relative to your location.

For us, modern people, Iridium Flares is a beautiful side effect of technology development, on which we often don't pay attention (partly because we even don't know about it).

Now imagine that there was an Apocalypse. Civilizations have fallen, cities destroyed, technology and knowledge lost, In fact the humanity back into the ancient times. And satellites of Iridium continue to fly in orbit and reflect sunlight to the earth. For people who don't know the nature of this phenomenon, it will be a miracle, omen, magic... 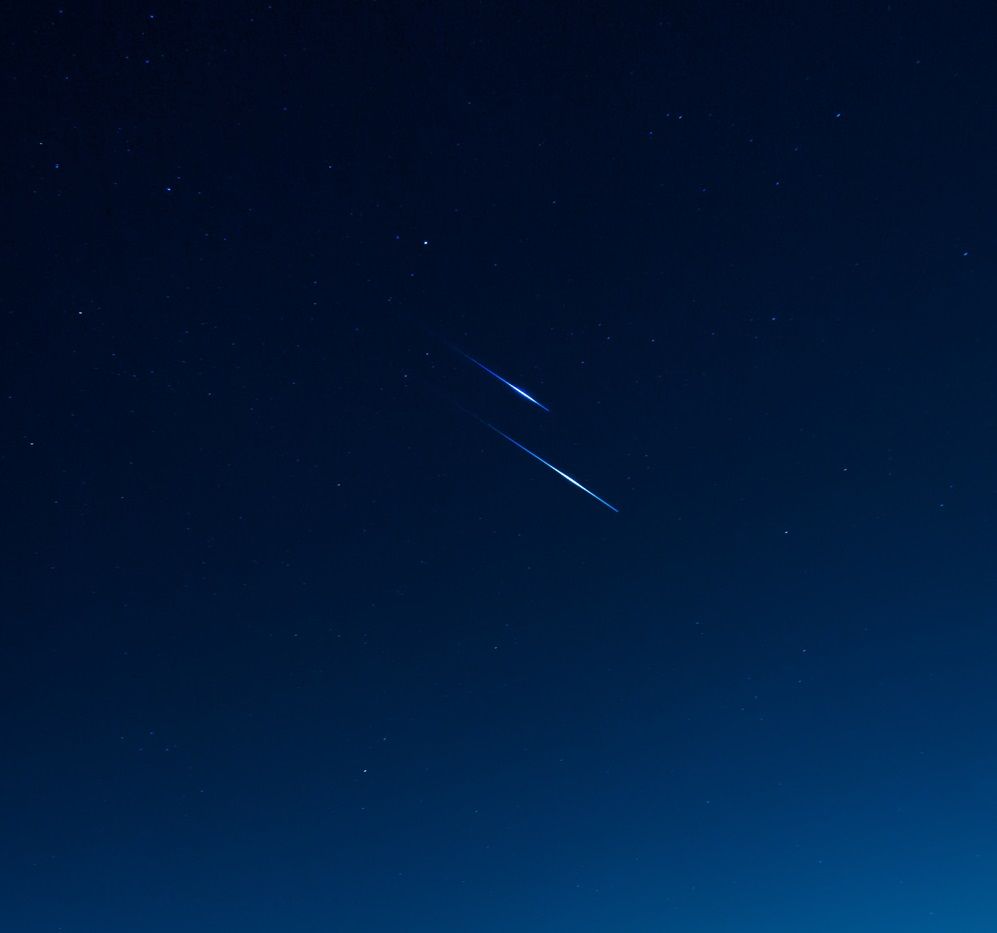 Excellent post, brings back memories. I was part of the original development team building the ground control system. We wanted to call the system Dysprosium, since that's element 66. :-) But then when you add new SVs ascending, at least one spare per orbital plane, and expired vehicles descending, the number of satellites being tracked could be much higher. The mission planning for that constellation was very complex.

BTW, there is a major upgrade to the constellation being deployed now. The first array of Iridium II satellites launched just a few months ago atop a SpaceX launch vehicle. I'm not involved with that but many old friends and colleagues are.

Wow, it's amazing to find out this information from people who directly worked on the project. thank you for sharing. I'm flattered to get your comments on this publication.

Wow! Something new every day! I love watching stary night and enjoying a cold beer

I'm glad that you liked it!

I love watching stary night and enjoying a cold beer

there is nothing better than this ;)

Great post, thanks! My company uses the Iridium network for satellite data transmission from remote places, but I had no idea they also act as "shooting stars". I like to make time lapses of starry skies, and see a lot of streaks like this. I assumed most of them were from planes, but maybe some are actually satellites. You can see an example just above the mountain at the right in the first picture in this post:

Do you think that is a satellite?

Based on the trajectory I think it's a satellite.
You make very good shots! Thanks natord! Though it would probably be cooler if it was a star ;-)

Did you take this photo above? It's really nice.

well, you can don't tell anyone about iridium flaers ;)

Just a minor detail I can leave out :)

Satellite is cooler than airplane at least!

Really great explanatory post....but what a shocker! So that's why my wishes didn't come true...so disappointing.
Seriously though. Very good.

Thank you. I'm glad that you liked it. And now you can create schedule to know when it was a satellite and not a star ;)