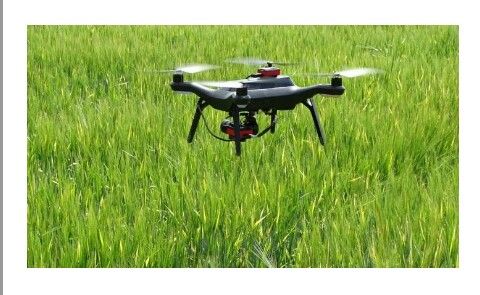 ABC Rural / By Brooke Neindorf
Posted Mon 26 Feb 2018 at 2:38pm
A drone hovers above a crop of green barley.
IMAGE Researchers used drones to check on their hands-free paddock of barley.(Supplied: Hands Free Hectare)
Researchers in the United Kingdom have successfully grown the world's first crop of barley using nothing but robot tractors and drones.

The project's aim was to have no operators in the driving seats of the machines or have any agronomists set foot into the 1-hectare paddock.

Researcher Martin Abell said there was a lot of farming already automated, such as GPS steering, but it was rare to grow an entire crop without anyone stepping into the paddock.

Hence the name of the project — Hands Free Hectare.

Mr Abell said the crop was seeded, sprayed, monitored and harvested autonomously, and it is something farmers could be doing soon.

We have been able to show the public that this is something that isn't too far ahead in the future, and it could be happening now," he said.

"It has also allowed us to raise the perception of agriculture to the public, so they see it as a forward-thinking industry and something that might attract new people to the industry." They also used drones to monitor and bring samples for agronomists to check.

"They were essentially our eyes, so we would assess the field using a multi-spectral camera and get imagery from the field showing us where it was strongest and weakest," Mr Abell said.

"We would then send a little ground rover that would collect samples for us that we could conduct agronomy on.

"And this meant we aren't walking out and on the crop as much, therefore protecting the crop a bit more."

A man wearing earmuffs sitting in a control room looking a computer monitors, with windows and a paddock in the background.
IMAGE Researcher Martin Abell checks the data from the Hands Free Hectare paddock.(Supplied: Hands Free Hectare)
To get the tractors to work for seeding and harvest, the researchers used an autopilot from a drone, which Mr Abell said was unconventional for research.

"We only had a year to do this project so we had to pick something that didn't require much development," he said.

"It also brought its problems, because the navigation algorithms within a drone are vastly different from those conventionally used for the auto steers on tractors to drive in straight lines.

"So we had to adapt that system to work like an auto steer system and achieve those straight lines that farmers are familiar with."

More testing needed to scale up

After a year of growing, monitoring and harvesting the crop of barley, the researchers were able to show the future of farming could be completely automated.

But there is still plenty of work and testing to be done on a larger scale.

Mr Abell said they were able to prove it could be feasible because part of the project was to do it on a small budget.

"It was roughly $350,000 we had and that was also to hire three people's time, as well as all the equipment we had to buy.

"I am sure if we can make it happen on that budget they can do it commercially with something that is user-friendly for farmers." Exclusive 30 days free upvotes to your every new post. No need to send any kinds of steem or sbd its full free service. we have paid service too so please check them too. Active the free upvote service and learn more about it here : http://www.steemitfollowup.cf