The Great Secret of Pyramid 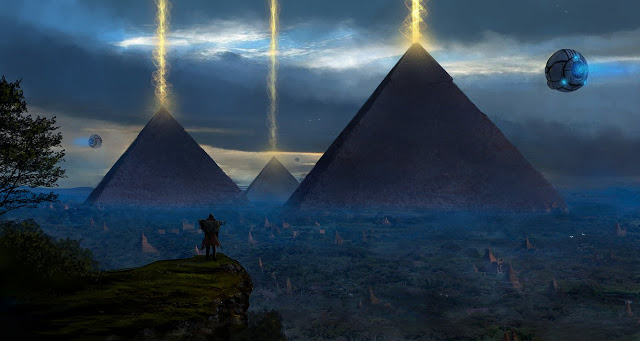 Hello Steemers, several days ago i shared about "The Pyramid Power Plant", So the usefulness of the power plant is to generate electrical energy, as well as electrical energy associated with the top of the pyramid made of gold.

he peak of pyramid made form pure gold which is now lost stolen. Gold is the best conductor. This gold itself serves to transfer negative ions to the sky, precisely the ionosphere (one layer of Earth's atmosphere. its function as a frequency transmission, both for communication and others.
As we watch in the Transformer Movie, when the receiver is installed at the top of the pyramid, then the peak gives the transmission signal to space. And in the mummy movie, is told when the orion belt is at the point of the constellation (orion) of all the mummies that the head is headed up can live again and become the pharaoh's army. This has something to do with the gold that used as a top of the pyramid.

in Some verse of Quran :

And Pharaoh said: "Haman, build for me a high building so that I may come to the doors, the doors of heaven, that I may see the Lord of Moses, and behold, I see him as a liar." Thus it was made Fir'awn looked upon the bad deeds, and he was blocked from the (right) way; And the pharaoh's deceit is nothing but a loss.

Pharaoh wants a tall building, which can penetrate the sky's door, he wants to prove the god of Moses. To penetrate this sky, the pharaoh needs a means of flying, then with that tool he can go up to the sky. According an archaeologist Dr. Philip Calah in his study titled Kings Room the Great Pyramids, the Egyptian pyramids built using magnetic limestone, which is able to generate energy, A pyramid-shaped form whether a historical monument or a modern pyramid can collect any energy around it to produce magnetic energy before the energies released to the air space in a sustainable manner. The pyramid is capable of absorbing all energy (including electricity from underground cables) to be inhaled to space and to new energy greater than original source (electricity), even capable of achieving infinitity if it a large quantity.

"The greatest secret in the construction of the pyramids is to produce energy, not just the tombs of the pharaohic kings. Perhaps the Egyptians and Mayans were able to generate electricity during their times.The Egyptians may have used solar or wind energy, power plants also helped by stones Diamond gems that are made with the mummies of kings."

The pyramid is able to manipulate all the elements of electrical energy that is around it, it is also capable of manipulating human energy that runs or runs around it. The collected energy will be channeled into the sky space as a double vortex. The ability to drain vortex energy also focuses not only on pyramid-shaped buildings, but also cone-shaped ones, or any kind of building form, as long as there is a bunch on it (obelisk, monolith, minaret and so on). It is capable of producing vortex. The energy element of the vortex is also capable of acting like a black hole in space that speeds up the movement of time.

Black holes are extraterrestrial phenomena in which gravity occurs ,That suck all the stars around them. It is a very powerful force of gravity that leads to the annihilation of stars. In fact, if the spacecraft enters the black hole space too, the spacecraft will travel very fast (time-lapse) until it enters another galaxy in a very short time, the time taken is shorter than the trip is not in the black hole, If the spacecraft survived the impact of the stars that were extruded into black hole. The gravitational law codes that Dajjal left behind in pyramid buildings and historical artifacts. The gravitational knowledge abandoned by Dajjal and Isaac Newton was developed to allow the Dajjal to convey a message about the ability of gravity to take time off, or to open the door of the unseen world. The pyramid produces vortex, the vortex is also capable of acting like a black hole, and the black hole also has a gravity that brings the human time to the other galaxy's door.

Here I conclude that the coincidence will not be repeated in one event, and we can see from the constellation and the point of alignment orion belt with Egyptian pyramid, pyramid mexico, and other pyramid with the same position.

The Electric of Giza The amount of people involved in pyramid schemes these days is too damn high. No I don't want your "essential oils"

This one looks like nonsense mumbo jumbo to me buddy.

This is only what i read last night, and accodt to some movie