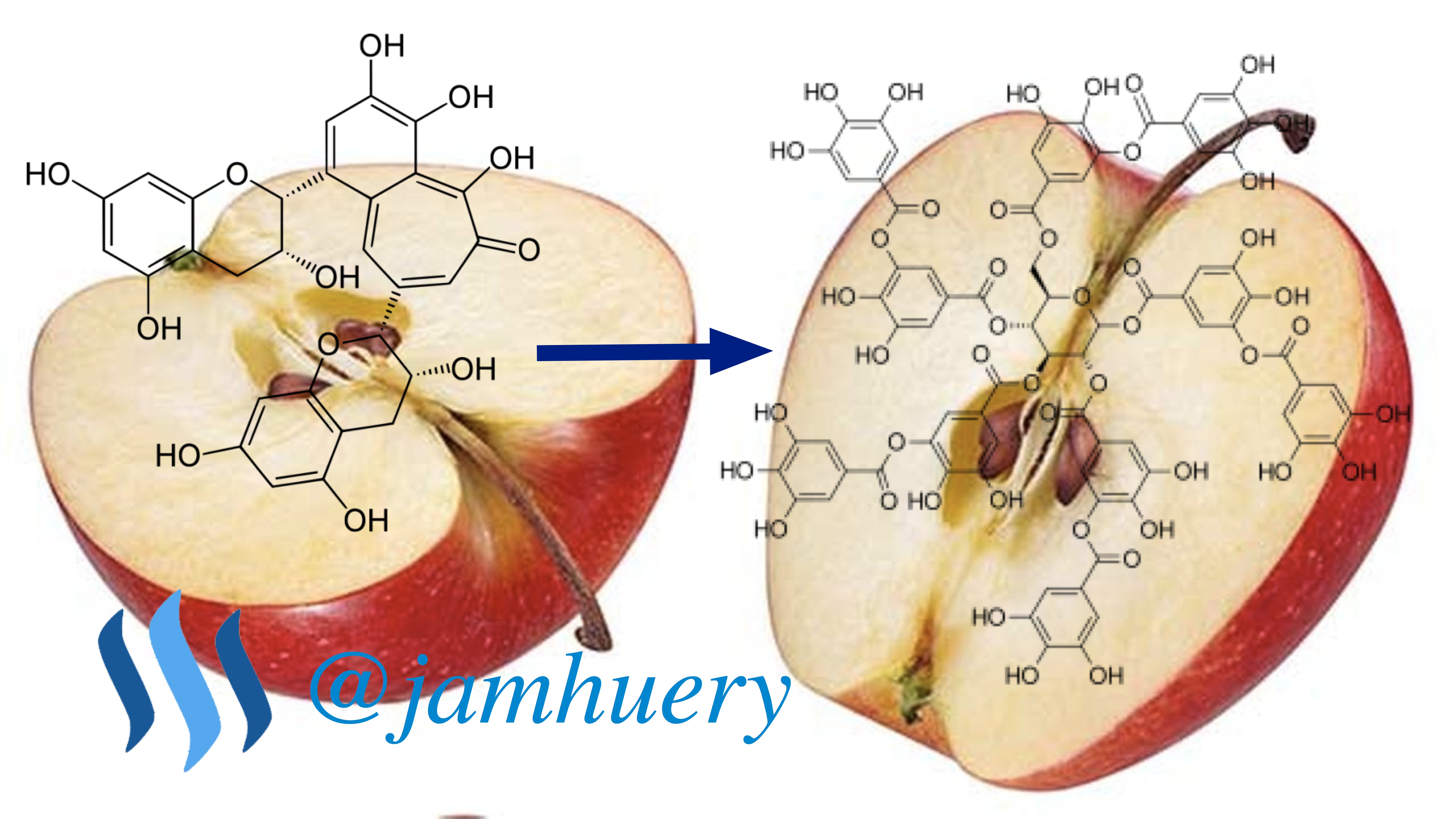 The browning process experienced by apples is an enzymatic browning process that affected by the work of phenolase enzymes. When the apple is peeled or cut, the enzymes stored in the tissue of the apple will be liberated. When the enzyme is in contact with oxygen in the air, phenolase will catalyze biochemical conversion of the phenolic component present in the apple so that the component turns into brown or melanin pigment. This process generally occurs at a pH between 5.0 and 7.0 and at temperatures that tend to warm. In addition, contact with iron will speed up enzyme browning reactions. This can be observed when the apple is cut using a rusted knife or placed in a copper bowl and then stirred, the browning process occurs can be seen in a shorter time. 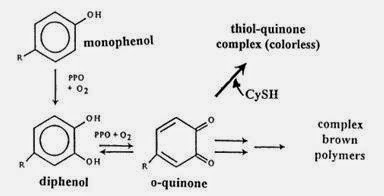 In the Cresolase reaction, the monofenol component present in apple undergoes hydroxylation to o-diphenol. In the Catecholase reaction, the diphenol is converted to o-quinone. This reaction is often also called the diphenolase reaction. Catecholase reactions occur immediately after the formation of o-diphenol compounds, without need for oxygen or phenolase enzymes. After the o-quinone compound is formed, the o-diphenol compound will undergo hydroxylation to a trifenolic compound will react further with o-quinone in the process of chocolate melanin in apple formation. The phenolic component of the apple is flavonoids and phenolic acids. Flavonoids in apple is flavonol, catechin, and epicatechin. Examples of phenolic acids present in apples are caffeine and p-coumaric acids that form of esters with quinic acid. Other phenolic compounds are floretin glycosides. The concentration of each phenolic compound in the apple varies, depending on the parts in which the compound exists. In apple skin, the dominant phenolic compounds are quercetin glycosides and flavonols. The core and apple seeds contain a lot of floretin glikosida. The apple cortex part contains many phenolic acids.

Using of inhibitors can be done to control process of browning. Inhibitors for phenolase enzymes may be diethyl-ditiocarbonate. This compound can prevent the occurrence of enzyme browning process. The process of inhibition can occur in three ways, namely: enzyme inactivation, inhibitor reaction with substrate, and inhibitor reaction with the product. Enzyme inactivation occurs when the inhibitor forms a complex with an enzyme that causes the enzyme to become inactive and unable to react with the compound. The inhibitor reacts with the substrate so that the substrate undergoes structural changes and can not form a complex with the enzyme. The inhibitor may also react with the product. However, this method can not be used in apples because diethyl-ditiocarbonate compounds are toxic to the body.

Reducing of food contact with oxygen can also control the browning process. This method can be done by soaking the apples in water before apple. This can be done on apples that are not directly consumed after being peeled or cut. Immersion of apples aims for the enzyme phenolase can not react with oxygen so that the browning reaction does not occur because the process of browning enzymatic require the help of oxygen in order to be happen. The process of browning can also be controlled by the process of heating food. Phenolase enzyme becomes inactive when heated. However, this process also has a negative impact. Sugar in the food will come out of food due to high temperatures.

Prevention of enzyme browning process on apples can also be done by decreasing apple pH. Phenolase enzymes that play a role in the browning reaction in apples have an optimum pH of between 5.0 and 7.0. When the apple is given a little acidic juice, the pH of the apple will decrease. When the pH reaches 3.0, the activity of the phenolase enzyme will decrease. Reduced phenolase enzyme activity will prevent enzymatic browning process. Ascorbic acid may be used because ascorbic acid is a natural inhibitor of phenolase. Ascorbic acid used can be obtained from lemon juice, pineapple juice and lemon juice.

Determination of Phenolic Compounds in Apples yes it right, cause influence of hydrochloric acid