Hello my fellow steemians. Welcome to my first post in the New series entitled Hospital-Diaries, where I will be sharing some of the Interesting Patient cases that I get chance to meet during my posting through various departments of My Medical College.

Today I had a chance to see an interesting case in the Out-patient Ward of the Otolaryngology(E.N.T), I will not be showing the pictures of patient(Due to patient's privacy ) but will show you how the condition looks like.

A 35 yr lady came to the Otolaryngology O.P.D with the complaint of sore throat, pain in the angle of jaw which was aggravated by chewing and swallowing & she also had dull pain .
My professor started examining the lady, he first did test for tenderness in the jaw by pressing the bilateral jaw and asked patient to do some movements. The result was she felt extreme pain. Then he examined the oral cavity and throat, there was no structural abnormality, but on palpation tenderness was elicited at back of oral cavity.
Tonsils were not enlarged and posterior pharyngeal wall looked normal.
We students were guessing she had some dental problem or some tonsillar/pharyngeal disease... But our professor suddenly uttered a word I had never heard of,


He asked us "This is the case of Eagle Syndrome, have anyone of you heard of it??"

Believe me that was the first time in my medical career I heard this term, I was like "from when the scientists started naming the diseases as bird's name??"

After no one could gave the answer, professor explained to us about the condition and I myself searched about it in the web and finally came to know ....."This Eagle syndrome is a real disease"

What is this Eagle Syndrome?

Well , you will not get this type of case in regular basis it is a rare condition(It was a luck i saw it).

How this Occurs? Whats the cause of it?

It is caused by elongated styloid process sometimes due to calcified stylohyoid ligament, if you do not have any idea about the styloid process , i will show you some pictures of it.. 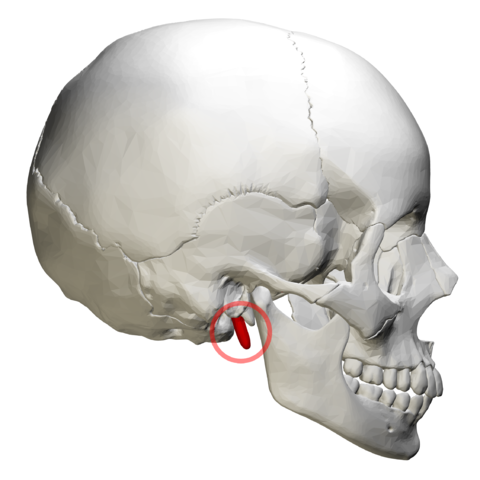 Here you can see that the red highlighted pointed bony structure is the styloid process, it is a part of temporal bone. It is just behind the temporomandubular joint(Angle of jaw, just in front of the ear). In eagles disease the styloid process is elongated and this intereferes with the movement of jaw and also affects other soft tissues and blood vessels.
Most of the symptoms are due to its compressing effect on soft tissues, When it compresses the internal carotid artery it may cause ischemic attack.

We can diagnose it by x-ray or CT, in x-ray of base of skull the elongated and thick styloid process are seen(red arrows in the picture).We may also see the thick calcified stylohyoid ligaments, which run from styloid process in the skull to the hyoid bone in the neck. The main treatment modality is the surgical removal of the elongated process. Symptomatic treatment can be done for pain and other symptoms of throat.

Why this disease named as Eagle syndrome? Anything to do with the Eagles??

well, funny thing is this has nothing to do with eagle and if you are wondering why I put a photo of eagle in it , its just for attraction (lol) and another reason is that I was initially thinking this name was given because the styloid process resembles the beak of eagle....
Then why?? Dr. Wat Eagle
I later found out that Eagle was the name of the scientist who discovered it, Wat Eagle is the full name..He was an otolaryngologist in the university of carolina, he discovered this disease in around 1937 and gave the name Eagle syndrome.

Eagle syndrome/styloid syndrome is a rare condition caused by long styloid process and thickened stylohyoid ligament it is characterised by sharp pain over the angle of jaw often increased during movement of jaw. It is treated by sugical removal of the elongated bone..

Thats all for today, feel free to put your thoughts in the comments and follow @himal for my future posts.. Thanks for your time!

Thanks @sudhirstha, glad you liked it... Hmm yes medicine is interesting in itself and we get to see many new things everyday

You were lucky... although the lady You were treating for sure didn't felt lucky at all LOL Now in Your career at least You will know and think about this diagnosis if You find someone with a dodgy jaw pain. It might help someone else in the future.

Yeah @sergiomendes thats the point.. I do not know if i will see another case in the future but one more diagnosis adds to the list of jaw pain.. Thanks for reading.. :

Nice post. I have never heard about the Eagle syndrome before: I suppose it is a diagnosis of exclusion:)

Thanks for reading.. Yes its an rare case, i feel myself lucky to have seen that case...