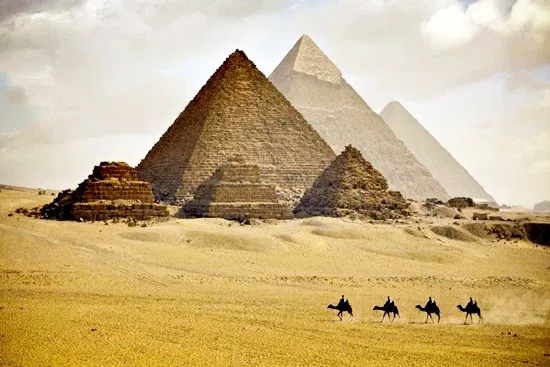 After having recently found a secret cavity in that of Keops, now a team of archaeologists claims to know how it was delimited.

The constructions of Egypt have always been one of the greatest enigmas in the history of mankind. It seems that everything is discovered and that we can not be surprised more than everything that this civilization hides, but with the passing of the years, a multitude of data and theories, new findings continue to appear.

They were built thousands of years ago, when there was no type of machinery and today they still amaze the world and science, for the enormous effort and the ingenuity used in its construction. Although slightly crooked, the imposing Great Pyramid of Giza is an ancient feat of engineering, and now an archaeologist has discovered how the Egyptians could have aligned the monument almost perfectly along the cardinal points, north-south-east-west.

It occurs halfway between the summer and winter solstices, when the inclination of the Earth is such that the duration of day and night is almost the same. About 4,500 years ago, Pharaoh Khufu built it; It is the largest of the three pyramids, which now stands some 139 meters high, on the Giza plateau and was considered a "wonder of the world" by a multitude of ancient scholars.

The builders somehow designed this ancient wonder with extreme precision: "The workers of Khufu aligned the great monument with the cardinal directions with an accuracy of more than four minutes of arc, or one-fifteenth of a degree," wrote Glen Dash, creator of the Glen Dash Foundation for Archaeological Research that develops in the Giza Plateau with Ancient Egypt Research Associates (AERA) and has carried out radar work in the Valley of the Kings, in an article published in the 'Journal of Ancient Egyptian Architecture '.

The Pyramid of Khafre (located in the same area) and the Red Pyramid (in Dahshur) are also aligned with great accuracy, said Dash: "All three exhibit the same type of error: they turn slightly counterclockwise from the cardinal points", he added. For more than a century, researchers have tried to propose different methods used by the ancient Egyptians to align them along these points, but in their study, Dash shows how a method using the autumn equinox could have been used.

In his experiment, which he led in Pomfret, a town in Connecticut in the USA, on September 22, 2016 (the day of the autumn equinox), Dash placed a stick (sometimes called 'gnomon' by modern topographers) on a platform of wood and marked the location of his shadow throughout the day.

"On this date, the surveyor would find that the tip of the shadow runs in a straight line and almost perfectly from east to west," he explains. The degree of error is slightly counter-clockwise, similar to the error found in the pyramids. "The tilt of the Earth at the autumn equinox allows the shadow to run in this east-west direction," he adds.

Although the experiment was conducted in the US, "the technique should also work in Giza," says Dash. For it to work, the ancient Egyptians would ideally need a "clear and sunny day, like most days in that territory," he told Live Science. "The rod could have been placed on a wooden platform or on the ground in that area," Dash said. Thus, the Egyptians could have determined the day of the autumn equinox counting 91 days after the summer solstice.

Was it really like that?
The experiment shows that this technique could have been used to align the three pyramids. However, it is unknown if this civilization came to use this method. The tests carried out in the last decades suggest that they could also use the sun or the stars to delimit such constructions.

All three exhibit the same type of error: they rotate slightly counterclockwise from the cardinal points

The ancient Egyptians left no record that survived that says what methods they used: "Unfortunately, they left us few clues. No engineering documents or architectural plans have been found that provide technical explanations that demonstrate how they did it in any of their temples. In fact, it is possible that several ways were used to do it, "he adds.

This technique has an advantage: it is relatively easy to use; other methods require more steps and are generally more complicated. "It is difficult to imagine something that could be simpler, either conceptual or in practice than the autumn equinox," he concludes.

This post has received a 0.28 % upvote from @drotto thanks to: @justlikeapill.