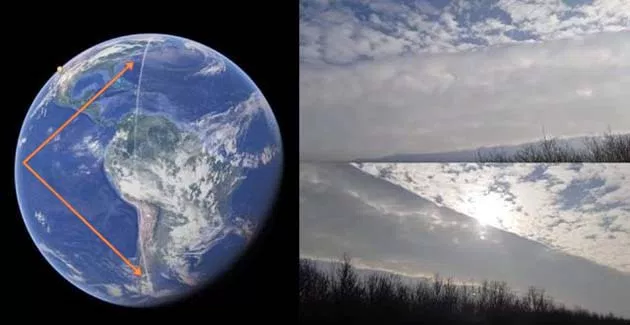 A really strange anomaly was detected in Google Earth and Google Maps.

A disconcerting line of thousands of kilometers that stretched from the South Pole, the Antarctic to the North Pole.

Possibly it has also been detected from the International Space Station.

There is a lot of discussion about what this huge line could be.

The mysterious line seems to be a form of energy or a frequency that the Earth was detected from something big.

Although some people suggest that it is a processing problem, it clearly has a physical construction.

The online community still discusses the strange phenomenon.
A video has emerged from a gigantic strange straight line that rises through the sky over the Netherlands.
The witness who sent the footage to MrMB333 writes:

"I share a really strange cloud line over the Netherlands that I saw on February 20, 2018."

"A strange formation of clouds of straight lines, quite broad and that goes beyond the vanishing point of my eyes".

"The cloud line seems to be of a different type of cloud material."

"The other clouds around and behind him."

As a result, it seems that the 'giant line' in Google Earth was real after all.

What is the origin of this phenomenon?

Where does it come from?

Considering the observation of the giant line on the Netherlands, the material of the cloud seems to have been created artificially.