A Short Intro: Rivers (and why you should give a damn)

Hello Steemit friends! This is another entry for my ecosystems introduction series and it is my first one for this year.^^ With the my latest entry, Wetlands, which can be taken as both terrestrial and aquatic (depending on the season) ecosystem, I am now shifting to aquatic ecosystems. First off is the river ecosystem, which sadly, is one of the most vulnerable ecosystems due to human activities. Most of us take it for granted, but really, rivers are essential for our survival. Chances are, the tap water you're relying on right now originates from a river, or a lake which is replenished by at least one river. Image source: https://www.pexels.com/photo/pine-trees-by-lake-in-forest-against-sky-247474/
Perhaps in terms of environmental conditions, no other ecosystem can match the river ecosystem. From the relatively low temperature of its headwaters to its relatively warm temperature of the river mouth, to its varying contrasts in its rapid and pool sections. Though it flows only one way, the river’s role in connecting virtually all ecosystems, be it terrestrial or aquatic, from upland to lowland, cannot be matched. The defining feature of river ecosystem is its longitudinal diversity, which can be best compared to the horizontal zonation and vertical stratification in pools and lake ecosystems. In contrast to basin type of aquatic ecosystems, where accumulation of nutrients and other materials is the norm, river ecosystems are discharging in nature and help transport nutrients and materials elsewhere. By doing so, a river ecosystem can literally be considered as the giver of life to other ecosystems, especially along its flood plains and banks, as it deposits essential nutrients and materials for life to prosper (Osborne, 2012). Given that context, as poetic as it is, it is no wonder why human civilization is often considered to be birthed along the banks of rivers. Image source: http://www.i-study.co.uk/Rivers.html
All rivers and streams originates from, in one form or another, precipitation. Over the course of time as tributaries drain to streams in larger degrees, rivers and grand rivers may develop, as the water flows and find a common drainage path in watersheds. As water tributaries merge together, meandering develops and this continues in all rivers and streams as the water flows. Meanders develop through the water flow’s ability to find the least resistance in the soil as it make its way downstream. But on a larger scale, river meanders are also influence by the Coriolis Effect as the Earth spins around its axis. River channels may also change overtime due to topographical and geological changes and sediment deposition could facilitate the formation of floodplains over time (Allan and Castillo, 2007; Osborne, 2012).

Rivers are transport ecosystem and could also facilitate formation of other aquatic ecosystems in terrestrial depressions such as lakes. A river’s changing sediment loads could also facilitate the formation of oxbow lakes, when enough sediments are deposited in a steep meander and cut off the water path in the outlying areas. Ultimately, the fate of river ecosystems could depend on its water source. Though most rivers maintain their flow as part of the hydrologic cycle. Any eventual change and succession that happen in the ecosystems of its headwater origins will inevitably affect the river itself (Keller, 2012, Allan and Castillo, 2007; Osborne, 2012).

Physical and chemical properties of a river

Temperature profiling of a river (source: : http://ferret.pmel.noaa.gov)
Like in other aquatic ecosystems, light availability plays an integral role in photosynthesis and primary production in river; light availability in rivers is highly depend on water turbidity, depth and topography which all affect the sunlight penetration in the water. Water chemistry, on the other hand, refers to water quality characteristics such as dissolved oxygen (DO), pH level, alkalinity and nutrient availability. Dissolved oxygen plays a vital role in supplying in supporting aquatic organisms’ respiration and thus is usually considered one of the most important parameter in assessing water quality. DO is primarily by affected by water current and usually has an inverse correlation with the respiration rate of aquatic organisms as well as water temperature. Water pH is a good indicator of water quality since it determines the resilience of the water to changes and thus influence the species composition in riparian ecosystems due to tolerance, and plays an integral role in the other physical and chemical processes in the water. Beyond pH measurement is the measurement of alkalinity which could further describe the water’s composition as well as determine the CO2 available for photosynthesis. Nutrient availability primarily depends on the geographical features where the tributaries of the river originates. Water current affects DO levels in river ecosystems and determines its effectivity in carrying sediment and nutrient loads. Water temperature, on the other hand, may also influence species composition by tolerance and can influence water quality in terms of DO levels, as well as other physical and chemical processes. In general, upland headwaters are colder and becomes warmer as it flows downstream. While substrate composition of a river ecosystem has an effect on its water current, influence meander formations and determine the volume of sediments being carried by the river. Based on geology, rivers can either be alluvial rivers, wherein its substrate is composed primarily of sediments, gravel and sand, or bedrock rivers, wherein is substrate is primarily composed of the bedrock itself. Between the two, bedrock rivers are less common. (Kemker, 2013; Kemker, 2013; Kemker, 2014; Keller, 2012; and Osborne, 2012). Image source: http://www.caryinstitute.org/educators/teaching-materials/food-web (©Ján C. Porinchak)
The major organism groups for river ecosystems include bacteria, primary producers, invertebrates, and vertebrates. Bacteria are responsible for the decomposition of organic matter and nutrient cycle, some bacteria can also fix other minerals found in the river substrate, especially cyanobacteria. Bacterial activities can influence the water chemistry of rivers and thus they can serve as bio-indicator in a river’s water quality. Primary producers for rivers include plants in the riparian zones; which can be composed of submerged plants, floating plants, and to some degree, terrestrial plants; and by the phytoplankton, especially those found in the channel sections of a river system (where primary production usually peaks). Invertebrates are usually primary and secondary consumers which consists of micro-invertebrates (e.g. zooplankton) and macro-invertebrates (e.g. arthropods) which serves as food source for the bigger vertebrates which includes fishes, aquatic mammals and even humans. Benthic macroinvertebrates are of particular importance since they can also serve as bio-indicators reflecting the water quality of a given stream or river (Duran, 2006; Kenney et. al., 2009; Osborne, 2012). Image source: https://www.americanrivers.org/rivers/discover-your-river/river-anatomy/
Rivers have 3 general zones: 1) the source zone or rithron (headwaters/upstream), 2) the transfer zone or potamon (pools/midstream) and 3) the deposition zone or river mouth (downstream). The rithron is where the headwaters originate; it has a relatively shallow depth and has turbulent stretches. While the potamon, is the main river channel - it is relatively deep and slow-flowing. It is also the main site for primary production in river ecosystems. While the mouth of the river can either be a long-stretched one wherein sediment load towards the sea could be lessened (estuaries) or it can be relatively shorter wherein huge sediment loads can be deposited in the sea (deltas) (Osborne, 2012). Image source: http://www.estuarywatch.org.au/cb_pages/victorias_estuaries.php
Estuaries are long and wide buffer zone areas between rivers and marine ecosystems. Due to the differences in the densities between freshwater and saltwater, mixing can be quite varied and could depend on the season as well as river flow and tidal influences. Such mixing effects estuarine species, and living in such ecotone is a challenge. Most estuarine species develop several strategies and adaptations in order to prosper in estuaries. Some marine fishes are highly mobile; they move in estuaries during high tide to feed and move out as the tide recedes. Other organisms simply develop physiological mechanisms to cope up and be able to survive in both brackish and fresh water. Migratory estuarine species can be classified into two: anadromous, the ones that live in the sea and breed in the rivers by passing through the estuary area, and catadromous which have a life history the other way around . Whatever the case maybe, living in estuaries can be benefitting, since estuaries are nutrient-rich areas which enjoys nutrient deposition from the river ecosystems due to downstream flow, and marine ecosystem due to nutrient upwelling in coastal areas (Osborne, 2012).

River pollution and other issues 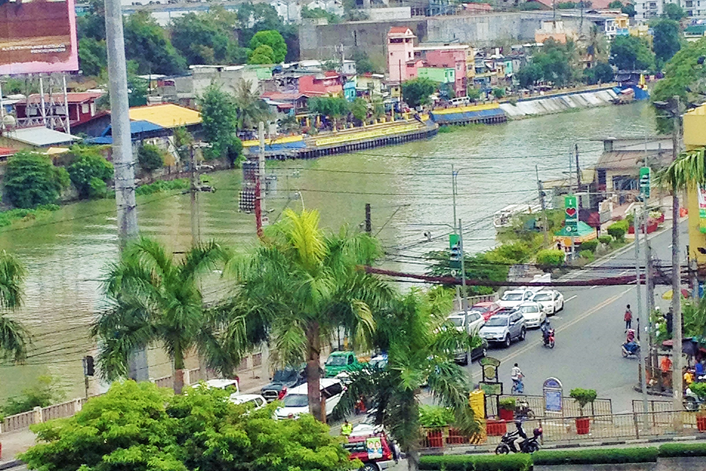 The Pasig River - the second most polluted river in the Philippines (photo taken by me)
Construction of reservoirs and channelization of water for power generation, irrigation, domestic and industrial use can alter many of the river’s ecosystem processes. Some of the effects on rivers by dams are: decrease water export, sediment and nutrient load downstream, terrestrial ecosystems inundation, displacement of ecosystems and human populations upstream, increased emissions of greenhouse gases, and increased possibility of disease outbreaks (Greathouse et al., 2006). Deforestation and change in land use also could lead to watershed deterioration which may cause increased siltation and flooding frequency at first, but could lead to water quality and water supply decline in most river ecosystems (Allan and Castillo, 2007; Pasimio, Jr., 2011; Osborne, 2012) On the other hand, eutrophication in rivers could also cause major disruptions in river ecosystems, particularly on the channel section where pools are situated. Eutrophication results from the significant increase in nutrient depositions due to agricultural, domestic and industrial sources. It is highly associated with increased loadings of phosphorous and nitrogen. Fortunately, eutrophication can be reversed, but it requires hardwork and coordination: from the proper identification the nutrient or pollution sources, to the strict enforcement of programs aiming to decrease further nutrient loads and other pollutants in river channels - which could eventually make its way in other aquatic ecosystems such as lakes and even oceans (Allan and Castillo, 2007; Schindler and Fee, 1974; Osborne, 2012).

Learn more about other ecosystems:

Thank you for visiting! 😇

Hello friend! Finally I managed to bring my two babies dogs with me and I want to thank youuuu for your support when I needed it. I send you a hug ❤ and I leave the happy ending in case you want to look :)
https://steemit.com/animals/@yiyi.maiola/i-m-back-with-the-best-story-ever-photos-videos

I was feeling down because of what's happening in the cryptoworld right now, then I read you comment. I'm glad you finally have them! And thank you making my day end in a positive note @yiyi.maiola. :D

The @OriginalWorks bot has determined this post by @dean101 to be original material and upvoted it!


Please note that this is a BETA version. Feel free to leave a reply if you feel this is an error to help improve accuracy.
$0.00
Reply
[-]
francuzzz (53) 4 years ago