Where to Find the Hottest and Coldest Things in the Universe 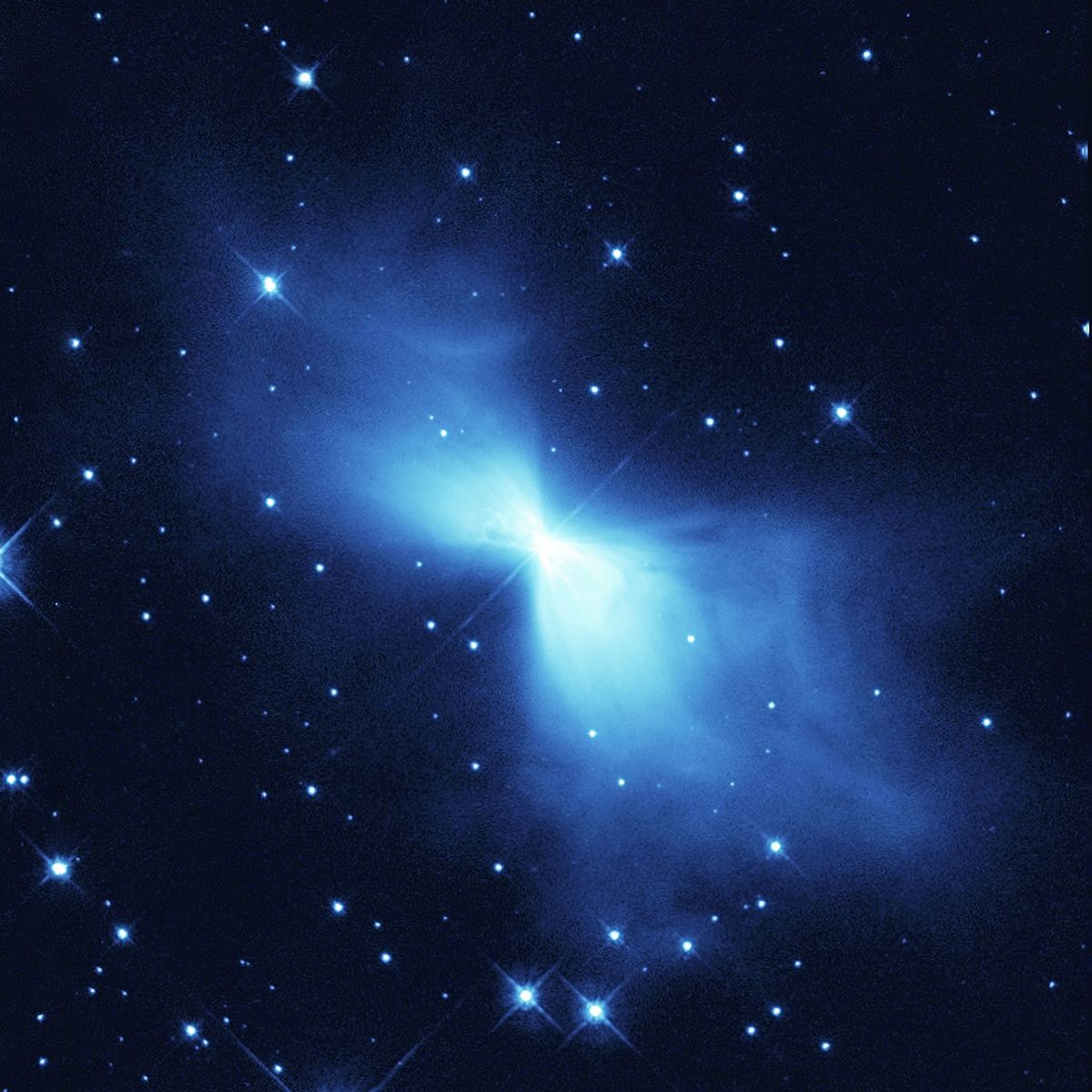 For the most part, the terms Red Hot and Cool Blue are inaccurate in astronomical terms. The coolest stars have red surfaces while the hottest bear a blue hue. However, in regard to the image above, the terms actually are correct.

What you see is called the Boomerang Nebula, and it is often referred to as the coldest region in space. Although not necessarily true, it's pretty darn close to being so. The one light year wide region has an internal temperature of just about 1 degree Kelvin, or 1K.

For some perspective, the cosmic background radiation is about 2.2K, meaning this nebula is colder than interstellar and intergalactic space. The origin of this is believed to be related to a physical function of gas dilution. If you pucker your lips and blow out air you can see the effect first hand. First, hold your hand right near the mouth where the air exits. Chances are it will be warm. Then move your hand away and notice how the air gets cooler and cooler. This is because as the air takes up more space and spreads out, it loses energy to the surrounding area, cooling down.

A similar thing likely occurred with the star that formed the Boomerang nebula, ejecting its material as a planetary nebula away at the poles. And when the gas spread out from there, it cooled down and actually lost energy relative to the empty space around it.

However I should inform you that even this isn't quite the coldest area in space. That honor belongs to the very edge of every single black hole's event horizon. In which estimates say the temperature could be as low as 0.000000001K, only managing to hang above absolute zero by means of Hawking Radiation.

Now lets work up from there. Like what's the coldest planet in our solar system. Well if we're talking about actual planets its Neptune, averaging at minus 210 degrees Celsius. Although Pluto and other distant dwarf bodies are likely cooler.

Moving over to Earth, the coldest recorded temperatures routinely appear in Antarctica with the coldest ever at minus 89.2 degrees Celsius. Now if I jump to the hottest temperature on Earth I could in theory end up bringing us to the hottest temperature known in the universe, as the CERN laboratory has used its massive particle accelerator to create temperatures higher than anything in the universe that we know of, however this is not as impressive on a cosmic scale as it sounds. The temperatures we're talking about may be absurdly high, but they are found only existing in a few atomic particles, and this brief heat is so short lived, it may as well have no effect on anything. So the Hadron Collider just isn't up for consideration.

I feel at this point we should clarify the difference between Kelvin and Celsius. They have the same sized units, however Kelvin is built to be an absolute scale in which 0 truly is Zero, the coldest possible temperature. The Celsius equivalent is -273 so once you're up to around the temperature at the surface of the sun, 5500 K, the difference is negligible.

Our sun however, while hot, doesn't even compare to the temperature briefly achieved by lightning moving through the air, which averages at around 26,000 K, way hotter than the sun. But this is only a brief event sustained in a small region of the air, we want to go for something consistently hot, which is what leads us to the very core of our sun.

As it turns out, the sun's tremendous size spreads all the thermal energy created in its core quite a lot. So to have every square inch of that surface sustain a temperature of 5500 K, the inner core must be not in the thousands, but millions of degrees. With the inner core at a mind-numbingly hot 15 Million K.

Now that's hot, but the truth is star cores can get far hotter, all you need is more mass.

As a star builds new materials within its core, the pressure and heat on the inside rise, it's a compounding effect. The increasing intensity in the core causes more fusion and fusion of heavier elements, and the heavier elements increase the intensity. Our sun will never be able to do this, Fusing hydrogen into Helium is just about all it does, if not it will fuse a bit of helium into carbon towards the end of its life.

But if you find a star with a very high mass, at minimum starting out with 8 times the sun's mass, the fusion continues into creating Oxygen, then Sodium, then Magnesium, then Silicon, and then the final stage of creation being Iron. Naturally you'd then expect that the hottest temperatures can be found in the process of fusing the heaviest elements, and you'd be correct. The Silicon Burning phase, the final part of a star's life-span that stretches no more than a day, raises the heat in a star's core beyond the Millions, and into the Billions of degrees.

About 3 Billion degrees to be exact, or 3 "Gigakelvin". That could give you a BAD sunburn. But more importantly, it can cause the star to produce Iron, a material that doesn't fuse in active stars because it gives off less energy in its fusion than it requires to pull off. And once that core of Iron grows to a size too large to sustain its own weight, it collapses, shrinks down to a ball far smaller and denser than it originally was. And what happens when things are compressed again?

They heat up, quite a bit under the extreme pressure, and the pressure created from the formation of a neutron star is truly something. For a brief time, the surface of a newly formed neutron star can blaze not in the Millions, not in the Billions, but a Trillion degree core. When something is that hot, it will radiate its heat away rather fast, so the Trillion degree surface is short lived, but once it has a little time to cool off the radiation slows and it remains fairly hot to the touch at a few million degrees. 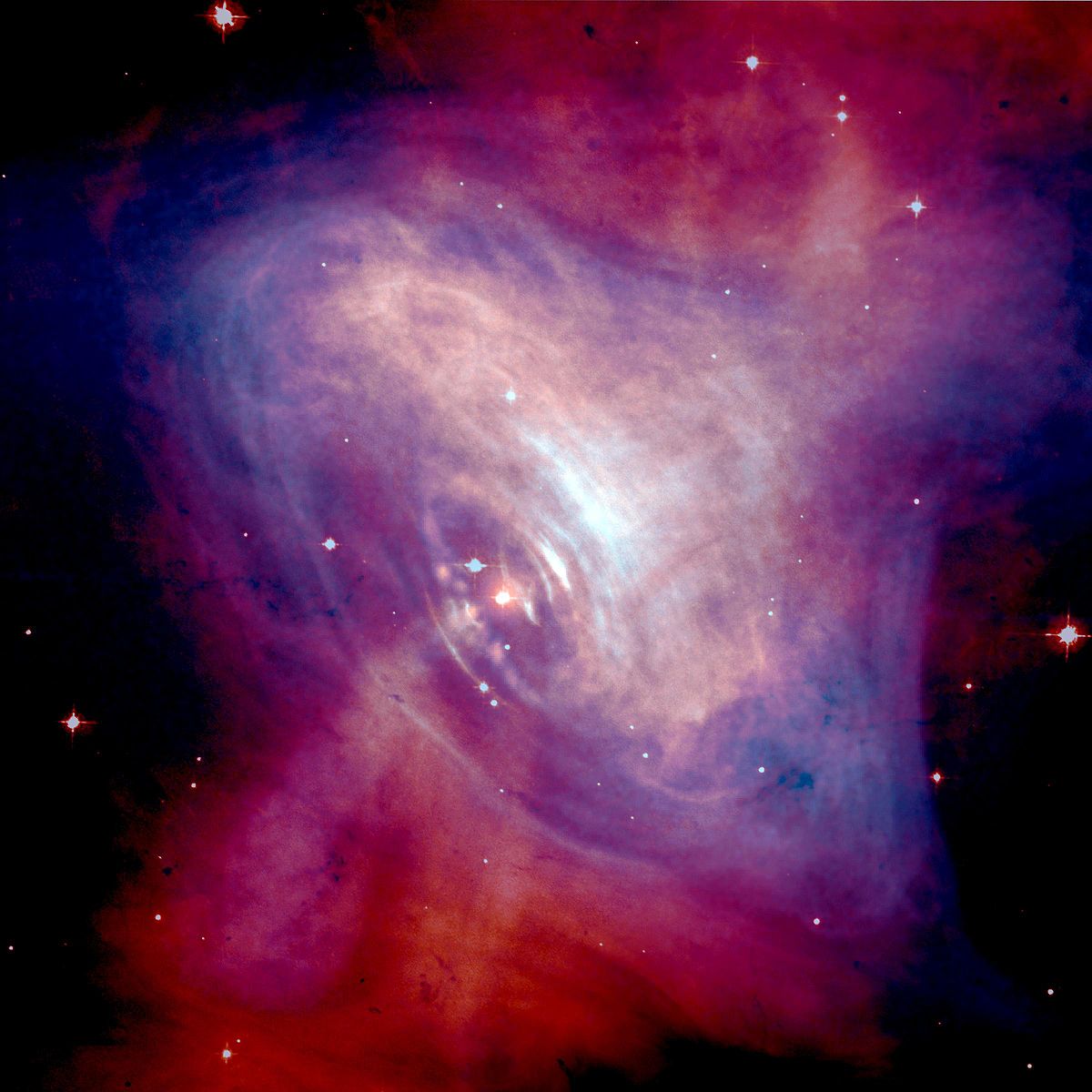 Above: A close up of the Crab Pulsar with its shock wave surroundings.

But perhaps the best I can possibly give you is found in the blaze of a quasar, a disk of interstellar material heated by immense friction to incomprehensible temperatures. The process of matter spiraling into the black hole's dark grasp causes powerful jets of radiation to scream away from the black hole at the poles. The process is not entirely understood, but one thing is for sure, these jets are hot. So hot in fact that they cap our tour of the most extreme temperatures in the cosmos. Their constant 10 Trillion degree interior is just a glimpse at the sheer strength of a black hole. The generation of more energy through simple collision based friction puts even the nuclear fueled hearts of stars to shame. And the scale is massive, the jets of radiation can reach out several light years. So of you're looking to bring your water to a quick boil, you know where to go.

Very well written and informative! trying to imagine such extreme temperatures is mind bending. Standing within a few meters of a good bonfire is enough for me! Although a Quasar roasted marshmallow does sound quite amazing..