The Top 3 Weirdest Things In the Universe

Space is strange, it always seems to be one step ahead of human creativity. Packing so many different objects and constructions that seem to defy what we understand about how the universe is supposed to work. Considering the unchanging nature of physics, one would expect that things would operate with predictability and be fairly consistent and explainable, but the truth shows anything but. There are a number of phenomena throughout the cosmos that we have struggled and will likely continue to struggle explaining for quite some time. So I've taken the liberty to list out a few of them, in no particular order.

Also known as LQG's, (Bet you can't figure that one out), these structures are exactly what they sound like: A large group of quasars. 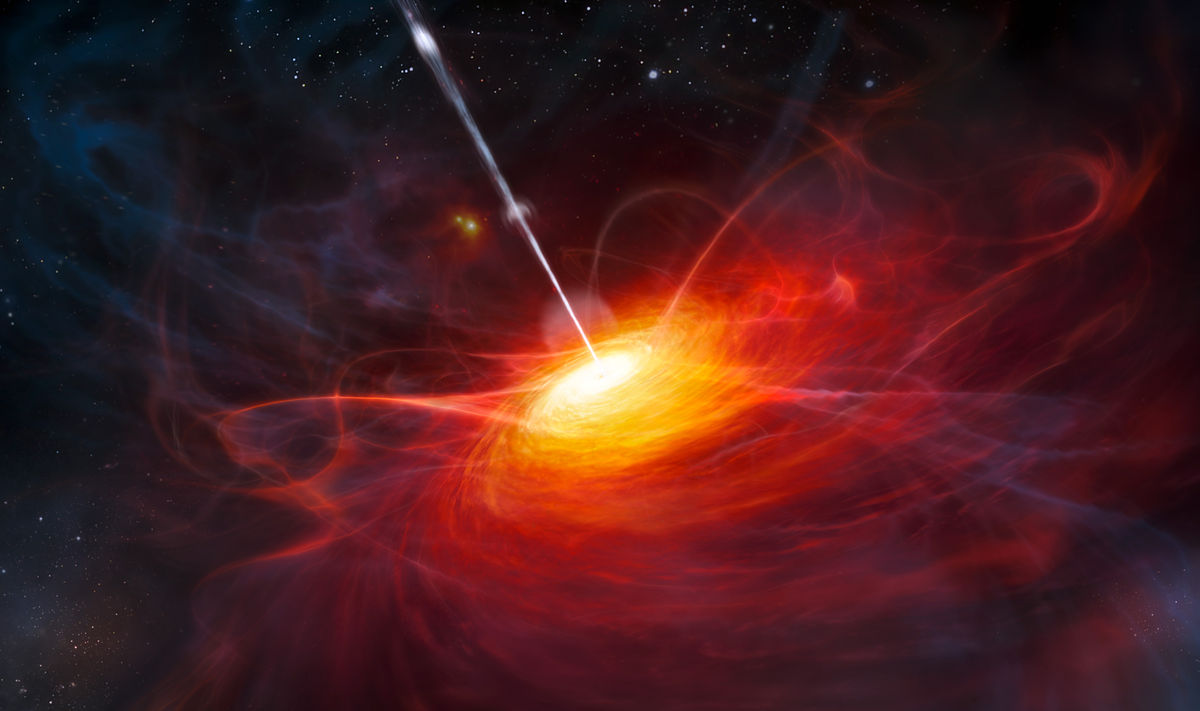 Concept image of a quasar

A quasar is a giant disk of gas, matter spirals into or, "Accretes", into a black hole and in the process of doing so, is accelerated to unfathomable speeds and builds tremendous heat and light through friction. The disk glows with astonishing brightness and is widely regarded as the brightest sustained light in the universe.

Keep in mind however, such structures can only exist in the centers of galaxies, the black holes found there will be a smidgen larger than those found floating about the rest of the galaxy. Only yielding, say, 1 Million- 40 Billion times the mass of the sun. And they are surrounded by matter, at least when the galaxy first forms.

But here's something weird, we've actually found occasions in which several quasars, all existing in large clusters of galaxies, come together to form groups. And some of these groups can be ginormous, measuring as some of the largest structures in the observable universe. All of them are odd, we still question how so many can get so grouped up, but there is one that stands well above them all. And its got a truly spectacular name: The Huge LQG

Although somewhat silly, the name is accurate to reality. It truly is huge, at least if it's real. Which we don't know for sure, but suspect based on a multitude of hints.

If it is real, the Huge-LQG is the second largest structure in the universe, only second to the Hercules-Corona Borealis great wall of galaxies. It consist of 73 individual quasars, and stretches 4 billion light years long. What makes this so odd is that it seems to go against the cosmological principle, a concept that Einstein proposed suggesting that when viewed from great distance, the universe should look very consistent and not vary in appearance, thus, objects or structures this large shouldn't even exist, as they would disrupt the consistency that seems evident almost anywhere else.

Now believe me, this is big enough for its own article, and it will get one, however as of now I'll keep things simple, Dark matter is a substance that is present nearly everywhere in the universe yet is almost completely unknown and doesn't interact with light.

We know it's there because we can detect its gravitational influence, in fact, it is estimated that it accounts for almost 90% of all the mass in the universe, while visible matter only comprises 10%.

What this above image shows is how we map dark matter, the blue haze is meant to represent the dark matter among these galactic groups. Its gravity is potent enough to sometimes overpower dark energy, the equally if not more confusing force that expands the universe.

Dark matter is simply weird. Note that it is not anti-matter, that's something else entirely, and anti-matter actually makes sense considering we've created it, observed how it works and found that it interacts with light and normal matter. But dark matter does not seem to fall into the same category as typical matter, it still has a gravitational pull, but light and normal materials do not interact with it at all. Leaving us rather in the dark in terms of its properties.

In fact, we don't know if ,"It", is indeed a thing. It may be inaccurate to refer to it as any type of matter, all we know is that quite a lot of the universe's gravity is unaccounted for, so we gave it a vague name and have come up with endless theories about it since.

It's rather reassuring to know that for all the theoretical objects, weird regions, puzzling electromagnetic rays we detect, and everything in between, nothing will ever top the simplest yet most non-understandable things in the universe: Black Holes.

Astronomy is a study that thrives on light, all observation of everything out there comes from the light it gives off. So what happens when you get an object that doesn't reflect any light at all? Hiding itself from the outside world and never letting anything out. Combine that with the strange quantum complexities that go on in the process of its birth and you get a truly enigmatic dark zones of the universe.

Are they infinitely small? Are they made of quarks? How fast do they dissipate?

None of these questions have answers and possibly never will, we can only do our best to expand the knowledge we hold and develop ever-improving ideas.