South meets East around a set of nutcrackers.

In South Africa Prof. Ramond dart in the twilight of his career had trained an apprentice and successor in Phillip Tobias. The two of them would meet a jubilant Louis Leakey in Central Africa in the Congo at the 4th Pan African Congress on Prehistory. 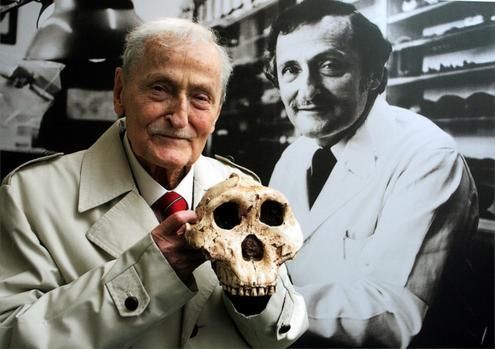 The new skull brought there by Leakey created no small stir, much excitement and no shortage of applause. It was here that Tobias, impressed with the size of the teeth and jaws, remarked "I have never seen a more remarkable set of nutcrackers".

The press heard it... the nickname stuck and "nutcracker man" it was from then onward.
Leakey, right from when he first set eyes on the specimen, saw the similarities to Australopithecenes but was convinced that no small brained Australopithecene could ever create tools and therefore had assigned a new genus to the skull - zinjanthropus because it was found surrounded by stone tools.

The scientists from the south who had found the first Austrolopiths simply concluded that this was and Australopith and they therefore, in spite of small brains, must have been capable of creating tools.

Despite this controversy surrounding this new find, which has basically become the norm, and still continues around new finds in paleo-anthropology to this day, Louis Leakey was once again treated like a celebrity as he toured the globe with his new skull.

The shackles of career past were now completely completely broken. He delivered 66 lectures in 17 universities and other institutions in little over a month. His tale of perseverance against all odds now came in handy. He quickly raised a grant $20 000 from National Geographic, more money than the East African operations had ever had before.

Philip Tobias, after thorough evaluation, would conclude that zinjanthropus was inappropriate as a new genus since this definitely was an austrolopithicene. It was however a new species and retained the boise portion.

Only in 1961 would it be firmly established, thanks to potassium argon dating of the various volcanic beds at Olduvai, that the "nutcracker man" was about 1.75 million years old.