I NEVER imagined that I would be doing this post.
So BIG thanks to @neoxian , @therealwolf and some others. They discovered that @getslothyy was a Scammer.

To be honest, I already imagined he was. And I even told Neoxian about it.

Anyways, here's my experience with him and the trouble he caused to me. 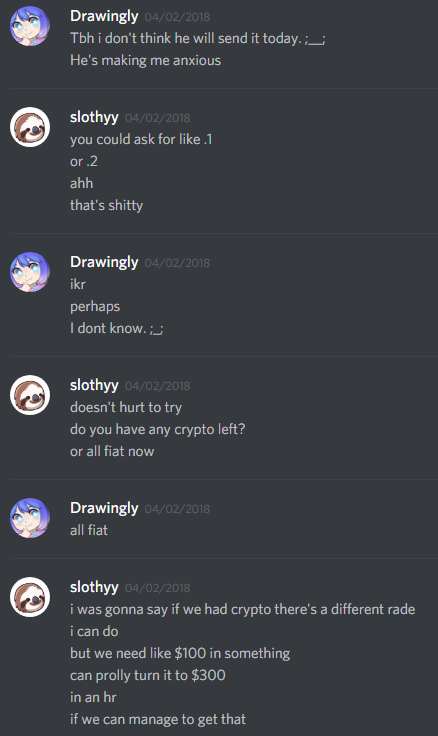 Here he noticed I was going to make a job for a guy, OUTSIDE steemit. He must've read the posts and all that because he began asking about the job and how I would get payed and all that. So he easily began saying he could make 300$ out of 100$. Which... i didn't believe at all if you ask me... I sent him some sbd, which I had to urgently pay Neoxian for his loan (1st loan). He promised me he would return it, ASAP. That same day. He disappeared for a week. So I had to cry to a friend about this. Meh, im a crybaby, but I really thought he scammed me violently. Haha.

I can't find where he said it but, he said to me "I was a bad guy, but Im trying to do the correct thing now."

ALSO, I found out that his mother apparently was sending him big bucks. 500$ usd each week, or so. APPARENTLY.

Am I missing something? If I remember Ill come back asap.

This was my experience with GetSlothyy.

I suppose there is no way I will ever get my 1000usd back. Right? But if someone has an idea on how to get them back, please tell me.

If not then... what should I do? :/ ... He evaded me ever since then and I should've raised my voice but I was scared of making a mistake on this community....

I'm sorry to everyone who trusted him and who fell into his claws of hell...
Im truly sorry.

I will add more if I find something else on my conversations or if I find the transactions I did in FIAT to him.

You don't need to sorry @drawingly and thanks for the information.

@drawingly neo notified us of your post on his discord server, I did read @neoxian and @realwolf post concerning this scam earlier. He scammed 4 witness from the latter's post.

I am so sorry for your loss, given he took advantage of your generosity and trust.
His heart is full of cabbage.

$1000usd in africa can feed a family for a year i must tell you, I wish I knew how to help on recovering your loss but I am just like you, an amateur in crypto.

This guy is a con man, please be careful next time.

Please be a patient, thrust your self, your $1000 has gone, in another opportuny you will get more, keep your spirit to still contribute and creative with your ability in steemit.

I feel you @drawingly. When things too good to be truth. Think again before making the decision. Take this as a good lesson. Be alert next time. Cheers!

I am so sorry to hear that . It seems like there will be many as the post of neoxian and the realwolf made him expose . I hope no other steemians gets to be cheated by him.

These evil people will be caught once. Most probably very soon. These scammers harmful for crypto market, our society and world.

Pretty awful the things some people do.. How can people like this feel good about the way they're living their life? :(

It's a shame to see he did this to even more people than I had imagined. I can't believe the difamation he had said against you and how he handled you being evasive of him. Totally the behavior of a fucking sociopath. I'll be writing my post rather soon. I think we all have a story to tell.

Let's be strong, @drawingly We will get through this and we will rise even harder than we fell. Keep it strong, sweetie!

congratulations to @drawingly who got a loan from the bank @neoxian
bank @neoxian aspirative, accommodative, and implementative. hopefully more glorious.
now i follow you @drawingly . thank you

If all this is true, I guess he ended up scamming me as well. Thanks for bringing this to light alongwith all the other people that did.

For a total calculated value of $234 STU, $406 USD before curation, with approx. $58 USD curation being earned by the paid voters.

I thought you guys were coming out a drawing contest or something out of this series scamming incident. Btw, sorry to hear that happened to you.

Sorry to hear that you got scammed, terrible. I read about this guy on the posts you mentioned. Thank you for warning us, good luck in the future!

Congratulations @drawingly! You have completed some achievement on Steemit and have been rewarded with new badge(s) :

This is really sad!! Can someone be so heartless and inhumane to a sick and needy person?? I still can't wrap my head about this ill. A lot of people need to get enlightened on this. Resteeming ASAP.

So sorry for your loss @drawingly

what an ****** I looked at his Blog, and i bet my ass off that he never was in Mexico. hes sitting somewhere in PL and trying to scam crypto.....

I would LOVE to see this supposed chat of me asking for a transfer of $1000 litecoins. If you're going to sit here and try and make shit up to join the bandwagon, back it up with proof.

I also sat there and spent an entire afernoon helping you start fundraising through the MSP discord chat - so for you to sit there and accuse me of scamming you is total bullshit.

Yeah that's exactly what I fucking thought, 0 proof @drawingly - you can make the accusation all you want, but where's the proof?

you are one audacious criminal, all the evidence that has already been presented and you feel somehow someway empowered to attack @drawingly?

I mean... I don't believe in divine justice, your very existence proves its not real, but to take advantage of a person with health issues like this makes me wish it did exist.

Listen, you are going to get attacked by everyone, and I know this won't do absolutely anything to change your ways. At some point in time you decided to be the person you are, to succumb to your addictions and attempting to help you is a task that only you should attempt.

Everyone is going to be Ok, even @drawingly and it won't be because life is fair, it will be because there a people who care and try to tip the scale in the right direction.

Have the decency to disappear from this place, if you have chosen to be manipulative, if you've chosen to life this lonely life where every single connection you've ever made with another human being has been to take advantage, go do that somewhere else...

and you did 0 fiat to me are you fucking kidding me? hahah what a god damn joke.