Ex-CIA Director Thinks US Hypocrisy About Election Meddling Is Hilarious

caitlinjohnstone (71)in #russia • 4 years ago (edited) 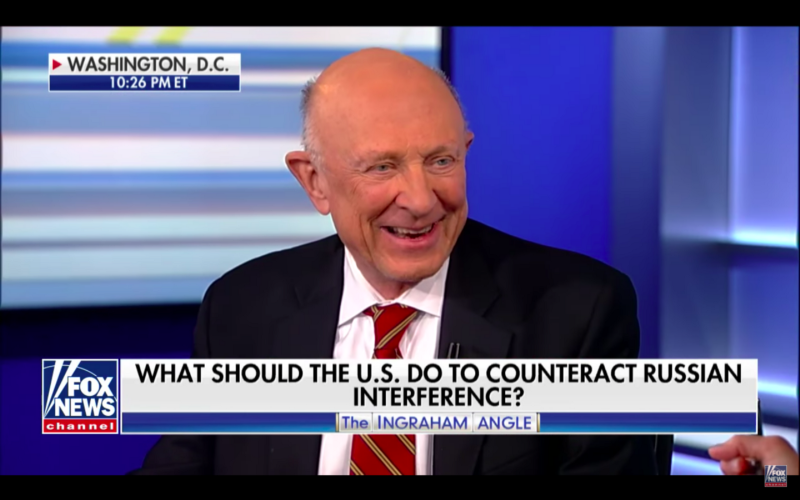 CIA influence is everywhere. Anywhere anything is happening which could potentially interfere with the interests of America's unelected power establishment, whether inside the US or outside, the depraved, lying, torturing, propagandizing, drug trafficking, coup-staging, warmongering CIA has its fingers in it.

Which is why its former director made a cutesy wisecrack and burst out laughing when asked if the US is currently interfering in other democracies.

Fox's Laura Ingraham unsurprisingly introduced former CIA Director James Woolsey as "an old friend" in a recent interview about Special Prosecutor Robert Mueller’s indictment of 13 alleged members of a Russian troll farm, in which Woolsey unsurprisingly talked about how dangerous Russian "disinformation" is and Ingraham unsurprisingly said that everyone should really be afraid of China. What was surprising, though, was what happened at the end of the interview.

"Have we ever tried to meddle in other countries' elections?" Ingraham asked in response to Woolsey's Russia remarks.

"Oh, probably," Woolsey said with a grin. "But it was for the good of the system in order to avoid the communists from taking over. For example, in Europe, in '47, '48, '49, the Greeks and the Italians we CIA-"

"We don't do that anymore though?" Ingraham interrupted. "We don't mess around in other people's elections, Jim?"

Woolsey smiled and said said "Well...", followed by a joking incoherent mumble, adding, "Only for a very good cause."

And then they both laughed. The US government’s own data shows that it has deliberately meddled in the elections of 81 foreign governments between 1946 and 2000, including Russia in the nineties. That isn’t even counting the coups and regime changes it facilitated, including right here in my home Australia in the seventies.

The US meddles constantly in other democracies, not "for a good cause" as Woolsey claims, but to advance the agendas of the loosely allied plutocrats, intelligence and defense agencies which comprise America's permanent government. It does this not to improve or protect the lives of ordinary Americans, but to make the rich richer andd the powerful more powerful, usually at the expense of the money, resources, homes, governments, livelihoods and lives of people in other countries. It does this with impunity and without hesitation.

And now we are in the middle of a steadily escalating new cold war between two nuclear superpowers, all under the extremely flimsy pretense of punishing Russia for its alleged election meddling but really to cripple the Russia-China tandem and prevent the rise of a potential rival superpower.

This is not cute. This is not funny. This is endangering the life of every terrestrial organism to advance the power-hungry geopolitical agendas of the US-centralized empire. Stop giggling, you fucking freaks. We see you.

The USA won the first round deposing the Australian Prime Minister

Australia put Julian Assange (Wikileaks) on the field to play the second round and what a round it is.

Ppl are just fishing for reasons to get Trump out of the office, that's it. This obsession w/ Russian influence is really just an over the top hatred for Trump.

How Many CIA Directors are we gonna see on the TV?

Does each network get their very own CIA Director Security analyst, or what?

Compartmentalisation to the extreme, I wonder if even the directors are aware of it.

You most likely never going to see them all, specially the CIA director of bullshit, they will want to keep that one a secret for sure.

It's just sad to see the USA waste so much money on bullshit. How many homeless people could have been helped just from the money that was wasted by CNN on fake news?
It's unbelievable that the sheep are still all quiet and nicely behind the fence, just waiting to be turned into meat.
keep calm and grow meat...

Woolsey is at the very epicenter of the neocon disease. He knows precisely what the CIA has done. Laura Ingraham is a neocon media whore. China? Go ahead, mess with them--seriously mess with them and 200 million Chinese soldiers will invade the suburban centers of political and historical amnesia.

Traditionally the West has modernized and the East has Westernized. This is changing, and fast. I think that might be the real threat to the American Paradigm. I am in the US, so my take cannot be so clear. I just always think how the Chinese paint Dalia Lama as a terrorist, is he? The US and China are similar, but Americans do not usually admit, or even see, that.

russia russia russia... but come on, look in the mirror! we’ve interfered in 81 foreign elections. but none of that matters because the cold war 2.0 propaganda is so thick. it’s not even good. but if you repeat yourself enough times....

In the video, James Woolsey completely & voluntarily gave up the CIA game plan going on for decades..."keep them weak and we can control them". This is done on a global scale either through state sponsored propaganda (under the guise of private corporations), coups, economic warfare, cyber warfare and if that doesn't work, just use bombs. Any nation that doesn't adhere to their global plan of 'full spectrum dominance' will be broken up into smaller and smaller pieces to 'keep them weak and control them'.

i hope the blind can see what you see.

it's obvious, but the thing with blindness is that even with open eyes a blind man cannot see the light.

Ughh... This video makes me cringe. Wish I could pass this feeling on to my siblings who are all into the Trump bashing and get them focused on what's really going on. Maybe one day. Thanks for the great article Caitlin!

maybe introduce them to steemit?

It's not very hospitable of you, this criticism. Those spy people really like Alice Springs. They heap praises on the culture and natural beauty of the place in their memos. #DecipherYou

Caitlin, I always up-vote your articles, because they are always direct, insightful and have a way of contrasting the good and evil. That said I have been reading article like this for 20 years and the bad guys are still here. What are our options in setting the world straight and why do the bad guys have so much power. I believe these are questions we should ask. What can we do other cataloging and voicing our objections to evil, voting etc. Here is one idea. You will have to see the rest of my blog for context though. https://steemit.com/collective-intelligence/@cmw/thinking-outside-the-vertical-line

So there are 81 foreign governments out there that could potentially declare war against the United States for them messing with their internal affairs. You know. If they were to use the same logic and handling practices as the US.

Caitlin, thank you for what you do, and for what and how you write. You are an inspiration to this 58-yo guy!

There are very few true conservatives left in this country. Fox may consider itself the alternative media, but I watch it regularly and don't recall even one time recently when someone has discussed the fact that the US is the chief meddler in the world.

Non one (including the majority of the Republican Party) would ever dare say it for fear of being labeled un-American and unpatriotic. I wish most Americans would at least have the courage to tell the truth as Woolsey did. It's not the act, it's who does it. Apparently when "good guys" do bad things it's OK. That's what most Americans truly believe anyway, as they compare $50k in social media ads to the attack on Pearl Harbor. This country has no hope.

And we want to weaken them. All you got to is destroy their strategy and they're sweethearts.