As a child, I was raped and tortured at the Ullswater Outward Bound camp in the UK. This camp is architected in a very similar way to Epstein's Island. It was also patronized by the British Royal Family.

This is me around the time that the abuse took place. I am wearing the uniform of King's House School in Richmond, London, who sent me to the camp: 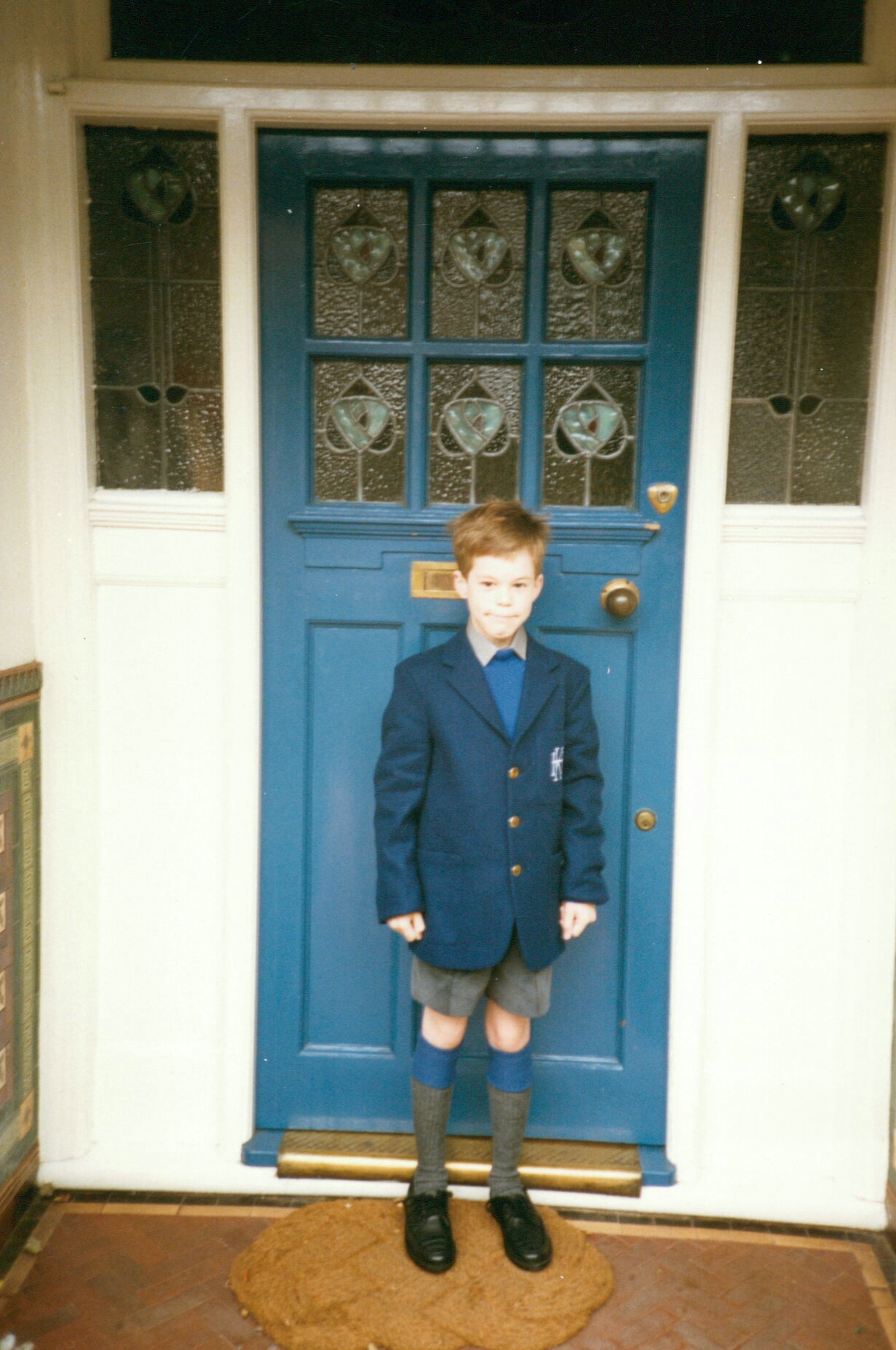 In this post, I want to provide more information, and photographic evidence, linking the Outward Bound Ullswater Camp and the British Establishment. The camp is intimately connected to notorious pedophile Jimmy Savile, Prince Phillip, and Prince Andrew — the latter, now better-known as one of Epstein's collaborators.

This current patron of the Ullswater camp — Prince Andrew — is under investigation for raping trafficked children. Outward Bound have made no announcements of terminating Andrew's patronage. But this will be unsurprising to those who are familiar with the camp's previous patrons.

Here is a photograph of two of Ullswater Camp's highest-ranking members around the time I was sent to the camp to be abused over many days. The photograph was taken on May 9th, 1984. Here you can see the Duke of Edinburgh, patron of Ullswater, and his close-friend, notorious child-rapist Jimmy Savile, who was himself a Director of Outward Bound Global.

For the above photograph, the caption reads"

"DJ Jimmy Savile shows the Duke of Edinburgh where he keeps his cigar before the Variety Club national sponsored sports luncheon at the Hilton Hotel, London. The Duke was guest of honour at the lunch to benefit the Outward Bound Trust - he is patron."

Here is another photograph showing Jimmy Savile's connection to the Outward Bound group: The caption for this one reads:

Radio One Disc Jockeys take time off to push Jimmy Savile from Broadcasting House to Park Lane by bed, in aid of the Variety Club of Great Britain and the Outward Bound Trust.

Here is a screenshot showing the appointment of Jimmy Savile as Director for Outward Bound Global. Strangely, the document lists him as Director for just one day. It also omits his date of birth: However, the Outward Bound Global listing at Companies House does include Savile's birthdate, and notes his date of resignation as Director: Given this context, my experience of being raped and prostituted as a child at the Ullswater camp was seemingly inevitable. Both a high-ranking member of Royalty and his friend, Jimmy Savile, were in positions of control of the camp.

Today, Prince Andrew — who is known to have visited other pedophile camps like Epstein's Island — is patron of the Ullwater facility.

To summarize: A man under suspicion of raping trafficked-children is the official patron of a network of 'adventure' camps for children. Previously, the patron of Ullswater was Prince Phillip, and the world's most notorious child-rapist. How did this happen?

The architecture of Ullswater child-abuse camp

The Ullwater camp is located in Cumbria, in an isolated spot comparable to Epstein's Island location. Here the perpetrators have good views of the surrounding land and can set up perimeter outposts to ensure security during rituals.

Epstein's Island has broadly similar geography, and is isolated on account of being surrounded by water — also providing a clear view of the surrounding area to ensure security for perpetrators: Here you can see the fire circle at the Ullwater camp where some rituals take place. It was here that I was, many times, threatened and burned: Here are tunnels at the camp that were also used during abuse rituals: And here are two of the boathouses that were used for drowning-and-ressucitation rituals: Here you can see the general area where children were held in cages for pairing rituals: This is the area of the building where I was 'paired' with another child called Clare, who was ritually murdered in front of me. For plausible-deniability the cages were also used for 'equipment storage'.

This cage pictured below is in one of the Outward Bound buildings — either at Ullwater or Howtown (another Outward Bound camp on the opposite side of Ullswater Lake). In this photograph, you can see that the child pictured is locked inside the cage with a padlock. The question could be asked: Would the perpetrators at Ullswater be stupid enough to leave evidence like this on the internet? The answer is: They have the British Crown on their side, and are likely signalling to other abusers.

You can watch a drone flyover of the Ullswater facility, here:

The Outward Bound network was founded by Kurt Hahn, who also founded the well-known child-rape facility, Gordonstoun School, where — among others — Prince Charles was subjected to trauma-based conditioning as a child.

Hahn was a notorious abuser and it is little surprise that his influence underlies the founding of the Outward Bound pedophile networks, and the camps' connections with the British Royal Family.

As was observed of Hahn during his lifetime:

"He revealed himself as having a fierce temper, a strong hand with the cane, and a temperament which hated being crossed... [a] dislike of being defeated at any game. Hahn was an avid tennis player. But was it an easily forgiveable weakness that his opponents had to be chosen for being his inferiors or else, if their form was unknown, instructed not to let themselves win?"

It makes sense that a man who openly beat children using weaponry would have constructed the camp where I, and so many other children, were raped and tortured. His construction of the equally abusive Gordonstoun facility places my experiences in a context where I can better understand the abuse I was subjected to.

It is already well-established that the British Crown runs concentration-camps in different territories for the purposes of ritually abusing children.

Other British Crown rape-facilites include Aden’s Torture Centers, where:

"locals who had been detained could expect to have their genitals crushed by guards’ hands, or to be forced to sit naked on a metal pole; their weight forcing it into their anus."

At the Crown's Kenyan camps:

"people were castrated with pliers then sodomized by guards."

In short, the British Crown, historically, has retained its power, globally, through a network of child-abuse facilities. Each time one is uncovered. All the evidence surrounding the camp is promptly 'lost' by Crown employees, or key participants eliminated.

By controlling the law-enforcement agencies of their territories, the British Royal Family can continue its criminal activities indefinitely. Notably, the system has been designed so that law does not apply to the Monarch. The Monarch is above the law, and law-enforcement swears allegiance to The Monarch, and not to the people.

The same system of exemption for the leader, operates in other large criminal organizations which modelled themselves on this Monarchical power system.

The British have a long history of abusing children. Many observers will have noticed that the British Crown is now attempting to do everything it can to distract from the activities of Prince Phillip, Prince Andrew, Prince Charles, and Epstein. Hopefully as more Outward Bound and Epstein survivors speak out the truth will shine through.

You can listen to my full account of being ritually abused at Ullwater in this video, here: