This is me. These are part of a current self-portrait series I am developing. I am trying to illustrate the pain associated with PTSD and c-PTSD. 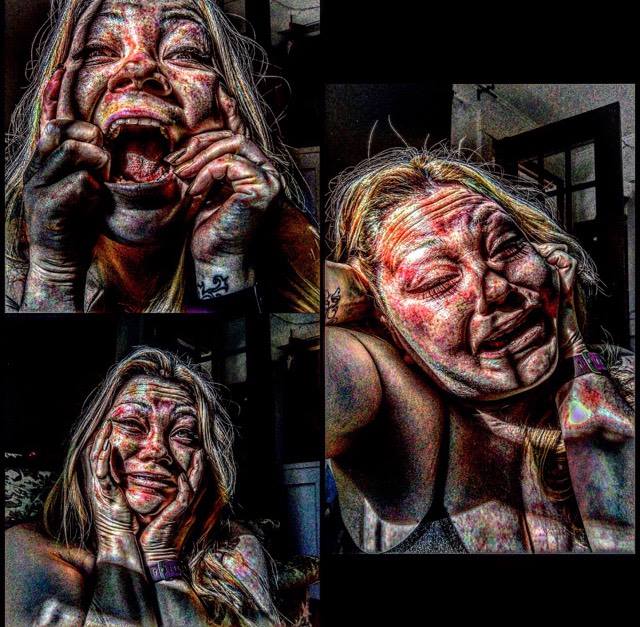 I love reading about psychology in general and even since high school I have taken as many classes and read as many books as I can on various topics. I think it’s because I want to better understand myself and fellow human beings. Nearly 4 years ago and after many failed attempts, I finally became strong enough to leave an almost 8 year extremely abusive relationship. I had no idea that shortly after I left, I would be attacked with the mental illness PTSD in response to repeated exposure to trauma. I would not find out until after research, endless reading and painful healing work that what I was experiencing was very complex combination of multiple mental illnesses. I stayed in an extremely abusive relationship for nearly 8 years. Why do victims stay with their abusers time after time, year after year, bruise after bruise? I read to gain a deeper understanding. I talk with my doctors and counselors about relevant topics and questions in my cognitive therapy. I have been diagnosed with PTSD, then later I would be diagnosed with C-PTSD, or Complex Post-Traumatic Stress Disorder. As we delved deeper into my triggers and treatments, a more detailed diagnosis was issued, including Stockholm syndrome. Naturally, I began reading more about it. We started looking deeper into how this happened and I started really examining the criteria for Stockholm syndrome. 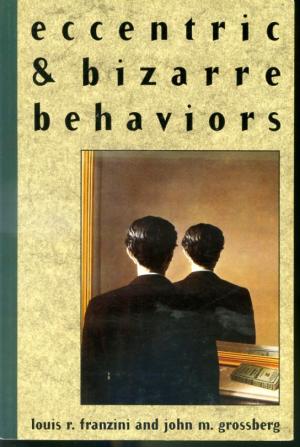 In the book Eccentric & Bizarre Behaviors by Franzini/Grossberg, Dr. Hatcher outlines a list of 16 unique techniques of cohersion necessary in order for Stockholm syndrome to develop.

When I examine the beginning of my most recent abusive relationship, steps 1-5 happened within the first 48 hours. I’m uncertain how much of my story to share here, so for now I will not be getting into too much detail. I was grossly over-served alcohol that night, lured from a bar setting into a cab by the security staff member I did not know and I woke up two days later on a strange dirty floor, naked with very little memory, next to two other girls and my vision was blurry but I woke to hearing male voices open a door and they were laughing at us it seemed. I did not know where I was. I had no food, my phone was dead, no car. Somehow, the next thing I knew I was in a relationship with the man that had lured me from the bar he worked at that night. That is the puzzling part. How did that happen? Why did I not run away and call the police? Stockholm syndrome boggles my mind. Somehow I fell in “love” with my abuser, fast and right away. I want to understand why. I need to understand why this happened.

According to psychologists Dee Grahm, Edna Rawlings, and Nelly Rimini, there are 6 similarities between hostages and battered women within the context of Stockholm syndrome.

Survival.
I survived. Barely.
My research is revealing that my self-defense mechanisms are super strong. I’m not sure if that is healthy or destructive as mentioned in #’s 4 and 5. Denial, rationalization, self-blame were things I can see clearly now, in retrospect. For example, in the depths of the abuse, I woke up the morning of Midwest Fashion Week, where I was to close a runway show with my newest collection of designs, and I saw my drunk best friend on her knees giving my abusive boyfriend a blowjob! Somehow he twisted up what I know I saw and he convinced me she was just picking up a water bottle she dropped and he was just peeing out on the porch. I can remember what I know I saw- still to this day, but I was so deep into the abuse that I convinced myself I did not see what I saw. Somehow I went to the runway show and tried to pretend everything was ok. I made myself believe a total lie.
One year, in December sometime, he was drinking heavily as usual and he ended up getting physically abusive. He would verbally abuse me and scream spitting in my face the nastiest hateful unthinkable insults. Sometimes I would break down and argue back and sometimes he would really strike a nerve, like saying he hoped my mom died of cancer, as I’m home for only a day to get supplies and going right back to take care of my mother through lymphoma, a serious blood cancer. This particular time, I cannot recall what I said because I ended up on the floor in the hallway on my back seeing stars before I knew what even hit me, literally. He head-butted me and my teeth went through my front lip. I still have the scars. Blood was going everywhere and I could see through the large gash in my upper lip when I got up off the floor and headed to the bathroom to look at my damaged face. He was yelling so loudly at me while I was screaming in defense. The details get blurry here, but the cops came. They were banging on the door and I remember hiding on the bathroom floor together being quiet with his hands over my mouth and crying, not wanting to be taken away from him. We held each other, rocking in fear while they banged and banged on the doors. How did I reach the point of feeling fear and terror about being taken away from my abuser? Wouldn’t that be the desired outcome, as soon as safely possible?
Why did I not yell for the police to help me?
There would be several times the police would come knocking in response to neighbors calling either over-hearing or witnessing domestic disturbances.

After the police gave up and left, I can remember him lovingly helping me apply a piece of scotch tape to the huge slit in my lip where my teeth went through, as a result of his head-butt. I remember cleaning up all of my blood while he drank more and chain-smoked camel menthol wides. I remember washing the blood off my neck and arms and hands, shaking in the blood-stained pink tub-water, unable to touch my face in fear of touching the serious injuries. I really needed stitches but he convinced me they would take me away if I went to get medical care. I remember him holding me as I laid wet in a stiff ball under the covers and I remember believing his apology as we slept next to each other that night. 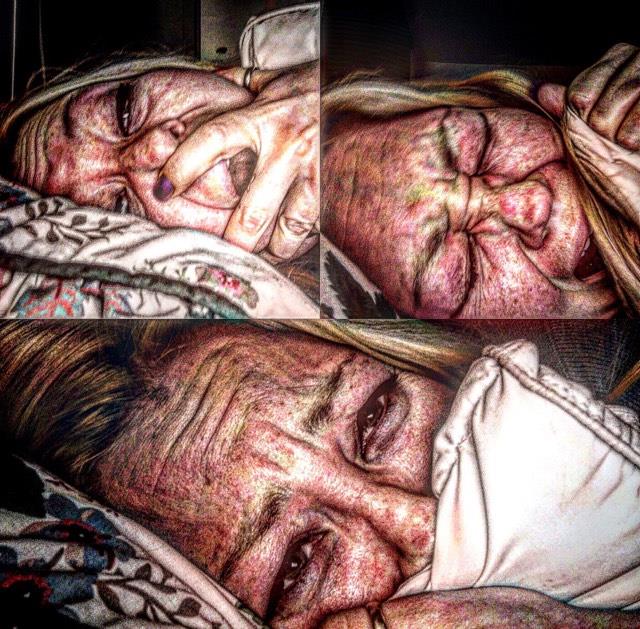 I had to go to work the following morning at a dog kennel. I reported at 6:30 am with a black eye and a piece of scotch tape holding the gash in my face together from where my teeth had gone through my upper lip. I was met with looks of horror and I quickly offered up this elaborate story of how we had been driving to get a Christmas tree when we hit a deer and my face hit the dashboard which caused the very visible injuries. I said I couldn't afford to miss work and begged not to be sent home. Home. Scary place back then. I would rather shovel shit and snow before sunrise in December with my face split open needing stitches than go home to him, yet I did not go to the police. I did not go to anyone. Aside from work, I hid from the world and stuck to my story about the deer and the dashboard. I’ll never know who actually believed my elaborate story to hide the abuse. Eventually I nearly believed the lie myself. That is actually a thing, in case you want to research it more.

“Avoidance coping is also related to Stockholm Syndrome as survivors who experience Stockholm Syndrome frequently delude themselves insomuch as they believe they experience less violence or refuse to acknowledge the abuse. Thus, Stockholm Syndrome may act as avoidant or wishful thinking coping in relationship to PTSD.”
“The average age of the women was 36.69 years with a standard deviation of 9.94 years. The women had spent an average of 5.9 years in the abusive relationship (labeled Exposure in Table 1; SD = 5.2 years) and had been at their respective crisis center an average of 8.2 days (SD = 8.5 days). The women also had an average of 2.2 children (SD = 1.8) and had a median income bracket of $0 - $15,000 annual income.”<--- These statistics are fascinating and nearly parallel to my experience. I am 36. Spent 7.5 years in the most current abusive relationship. And I also fall under the income bracket.
http://www.inquiriesjournal.com/articles/35/the-relationship-between-stockholm-syndrome-and-post-traumatic-stress-disorder-in-battered-women

Ontario Woman Abuse Screening Project has a really useful slideshow to help illustrate answers to some of the questions I asked previously. Let me share my favorite slides with you. Here is the link, should you want to read the whole thing. http://slideplayer.com/slide/2411217/ . 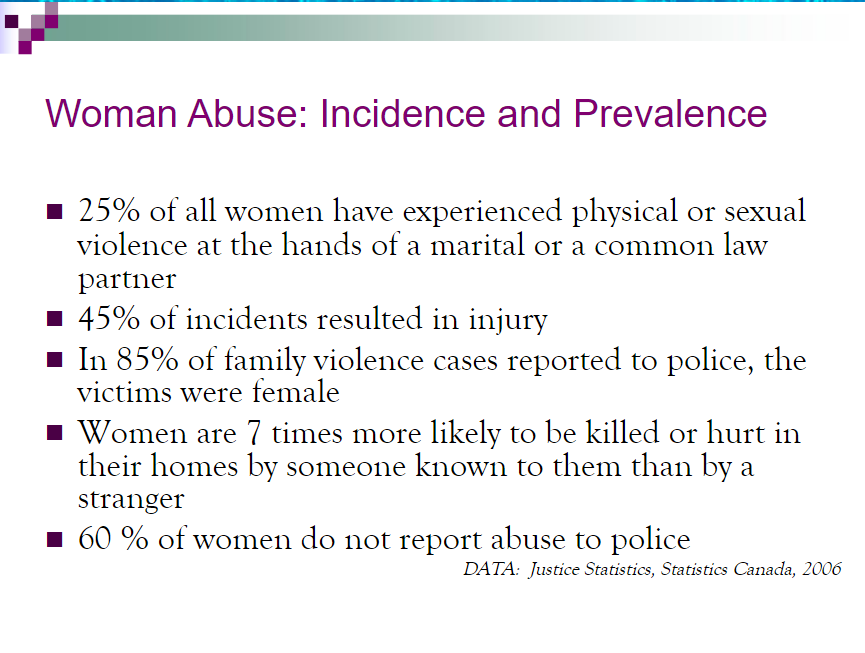 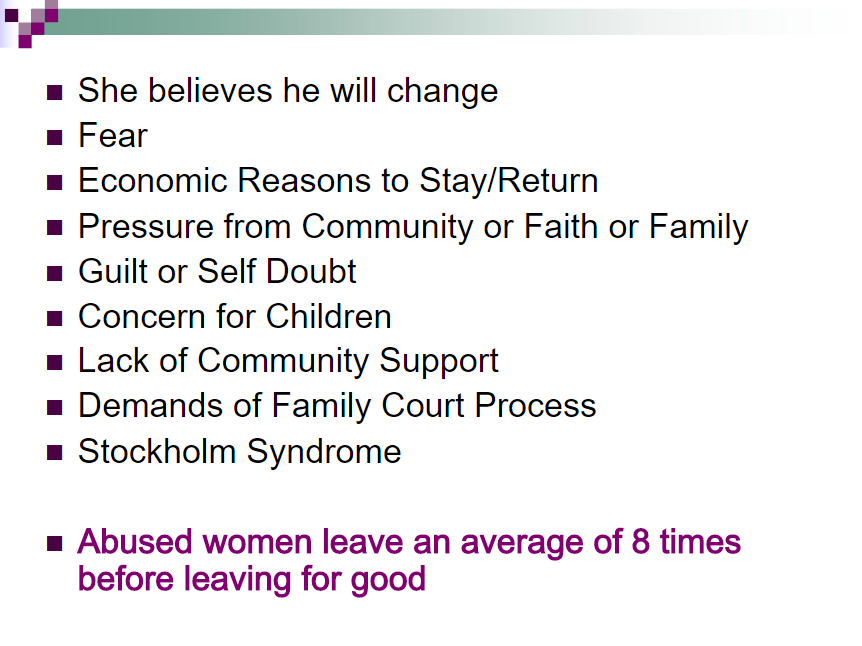 More insight is provided deeper into the study into the ways the abusers create the controlled environments. I found these charts to be super helpful to illustrate the whole picture of ways this women find themselves in abusive relationships for years. 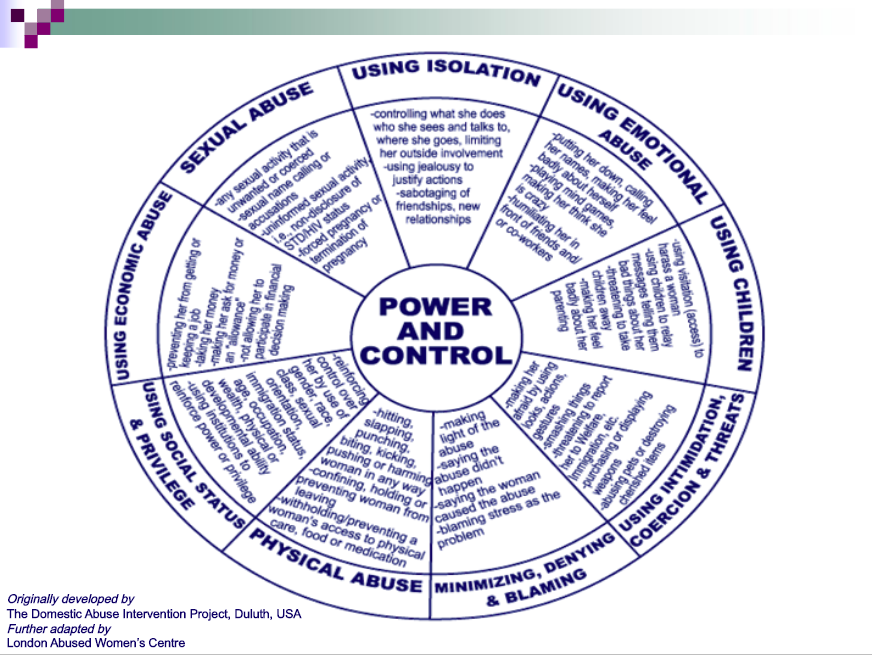 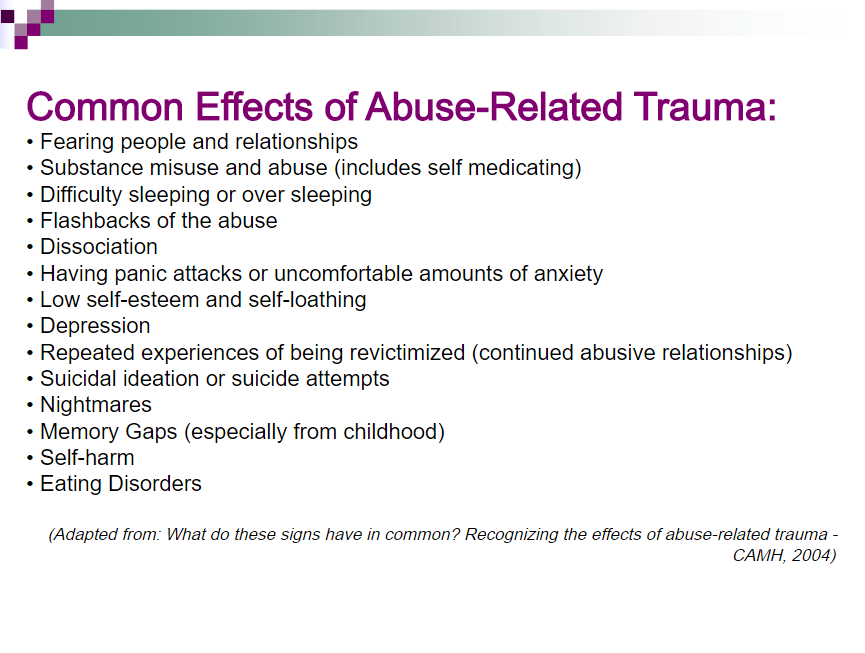 I want to stop here so we can really look at this information and think about how it applies to us or the people we have known who stay in abusive relationships. I will be writing a follow-up article to this one, so stay tuned as I dig deeper to understand why myself and so many women like me find themselves questioning abuse while asking, “How did this happen to me?” This is a post with importance that CANNOT be overstated. I hope this finds a wide readership. Thank you for surviving and sharing your story.

thank you for saying that.

interesting what is postulated in this article, voya verify with my studies

I hope to help in some way by revealing my experiences, i'm happy to help with research or interviews, etc.