Pseudoscience: The quantum biophysics healing patches that might also irradiate you

Yesterday I mentioned these lovely items in a post and @mcw asked a question that inspired me to just make an entire post on the subject.

Some time ago I came across the wonders of pseudo-scientific Ebay healing claims. Using unnecessary buzzwords like "quantum", "smart", "energy", "natural ionic power", and "biophysics", these products claim to protect your health by (among other things) blocking dangerous electromagnetic radiation.

I'm here to tell you why these claims are blatantly false, and how the products themselves also happen to be quite radioactive. That's why I own one afterall - they actually make really good Geiger counter test sources. I'll be focusing on one particular product (because it's the one I own), but I assure you that what I say here applies to most if not all of the numerous similar products on the market. If you're up for trashing some pseudoscience, read on.

Who could have guessed that such an incredible buzzword could exist?

For the sake of citing sources, I unfortunately must link to the seller of the particular product I'm going to be tearing apart, as I'm quoting the product description extensively. You can find it here.

Let's go through some of the product's claims and show why they are meaningless, hijacking scientific-sounding terminology to sell something. Honestly the entire product description is somewhat of a gem, but let's pull some wonderful excerpts. The environment we are now living in is bombarded daily by Electromagnetic Frequencies (EMFs) and toxic pollutants. EMFs originate from power lines, electric and electronic technologies, computing technologies, and telecommunication technologies such as Cell Phones, Smartphones, Wi-Fi, Radios, TVs, RADAR, GPS devices, computers, laptops, tablets, many home electric appliances such as microwaves and washing machines, many office and industrial electric equipment, and many microelectronic lifestyle devices.

Research and scientific studies have also shown negative health impacts from Cell Phones and Wi-Fi.
By placing the Quantum BioPhysics(R) Natural Power Ionic in the car, at work, home or carrying it with you in transit, creates a Quantum Energy Field that has been known to harmonize harmful effects of EMFs.

To reiterate: The electromagnetic radiation produced by wifi routers, computers, radios, microwave ovens, and other electronics do not have the energy to ionize atoms or break molecular bonds. Electromagnetic waves (of which light are a part) are quantized into massless particles known as photons. Every photon has a certain energy, determined by the frequency of the electromagnetic wave.

The waves that deliver AM radio to you have frequencies of around 1 MHz. Waves carrying FM radio signals have a frequency of around 100 MHz, and Wi-Fi, Bluetooth, and Microwave ovens emit 2.4 GHz (2400 MHz) radiation.

On the other hand, ordinary harmless red light comes in at a screaming 400 THz (400,000,000 MHz!). That's a frequency over one hundred and fifty thousand times higher than the frequency of EM waves emitted by your computer's Wi-Fi card. This corresponds to red light having photons with >150,000x more energy than Wi-Fi microwave photons. And to put the icing on the cake, red light photons still aren't energetic enough to ionize anything: You need to go about 10x higher frequency to reach the ~13 eV threshhold for ionizing hydrogen, although you can break molecular bonds before this.

So, the radio waves and microwaves emitted by the electronics around you are harmless. All they can do is infinitesimal heat up your body. They cannot ionize atoms, and they cannot give you cancer like nuclear/ionizing radiation can. The photons emitted in Wi-Fi transmissions are not even close to having the energy to be able to do damage to your DNA.

I will cede that some researchers are still studying whether or not low frequency electromagnetic radiation is a health risk or not. Even if my own personal opinion is that it's totally harmless, it's important to not get carried away and to follow what the research actually says. That being said, it is 100% impossible for microwaves to cause cancer in the same way that ionizing radiation causes cancer (destroying molecules and ionizing stuff).

Somehow every single one of these claims is nothing but buzzword nonsense. I'm not a chemist but I'm pretty sure "hexagonal water clusters" is meaningless. Natural quantum energy fields? Micro-circulation? Reflexology frequency tool? All meaningless.

NEUTRALIZES RADIATION WAVE AND TRANSFORMS IT TO BE THE HEALTHIEST NATURAL LIVING WAVE FOR HUMAN BODY AND ENVIRONMENT.

We've made it to my favorite part. This part right here makes the quantum biophysics patch the most ironic health bamboozle I've ever seen.

I already discussed above why electromagnetic radiation isn't harmful unless the individual photons have enough energy to be classed as ionizing radiation. But this part of the description really takes the cake.

To start, a lot of its claims are provably wrong just by default. Cosmic radiation, for example, is made up of extremely high energy particles (mostly protons). On the ground you usually see secondary cosmic rays such as muons. These particles are not going to be stopped by a disc of plastic a few millimeters thick. I guess it's claiming to protect entire homes from radiation, but in order to do that it would have to either generate an enormous electrostatic field (such a field able to stop cosmic rays would also produce ridiculous amounts of braking radiation in the form of XRays due to the rapid acceleration of charged radiation) or an absurdly strong magnetic dipole (click here to see my post on magnetic shielding and why it's definitely not feasible in a tiny disc the size of a coaster). So we already know it can't stop cosmic rays or other types of high energy ionizing radiation.

I'm not even going to start on "natural living waves". Could this be a natural living wave?
Image credit

Here's the best part - these stickers are somewhat radioactive. Actually quite so - they produce radiation easily detected on pretty much any radiation detector. Up against the disc, this radiation far outnumbers natural background (by at least an order of magnitude). Here's an image of my geiger counter's meter, with and without the quantum biophysics sticker: 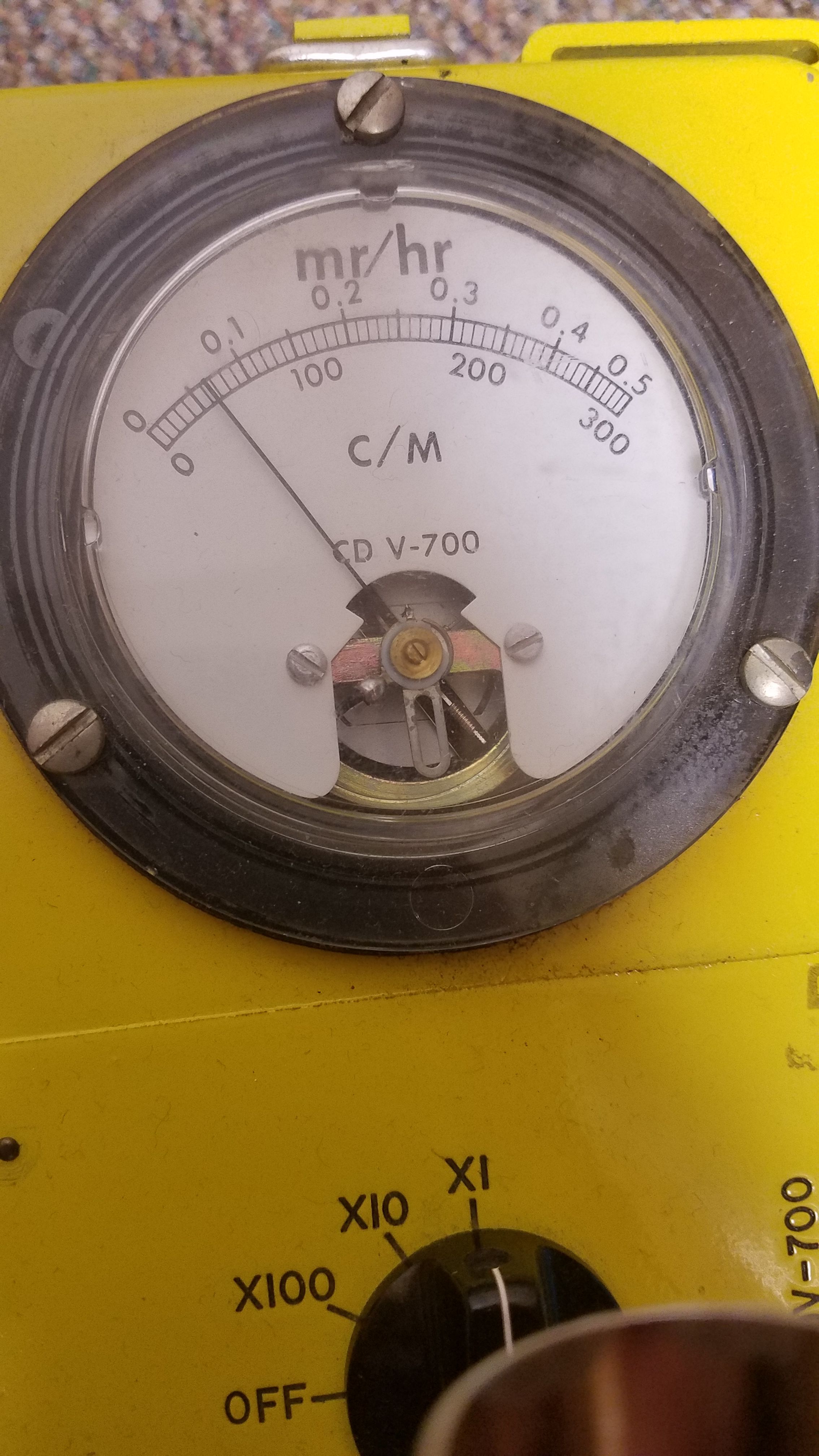 Control case - This is one of the peak readings for background radiation. The needles isn't very accurate at such low radiation levels. The needle is typically lower at background rates. x1 Mode With Quantum Biophysics sticker - Peaks were much higher than this, and higher still if I center the patch on the tube. On average the reading was around 300 CPM. I believe the output radiation to be a mix of beta and gamma due to the presence of Thorium decay products. x1 Mode

I'd like to be clear that this isn't dangerous by any means. The radiation levels on airplanes are typically higher than what you'd be exposed to with this patch in your pocket. It's harmless. But I personally find this completely hilarious that the products explicitly trying to block a harmless type of nonionizing radiation by fearmongering are pretty radioactive.

But where does this radiation come from?

For the answer, I'm deferring to a YouTube video I came across awhile back. The creator of the video owns a gamma spectrometer (a device that can measure different gamma ray energies and identify radioactive elements, something I hope to own one day) and measures one of his collection of radioactive pseudoscience tokens to find that it contains Thorium - Thorium-232 mostly (if it's naturally occurring Thorium). What we are then seeing come out of the disc are all of the radiation types produced by Th-232 and its decay products (when Thorium decays, it decays into a chain on unstable elements until eventually reaching a stable isotope).

The presence of Thorium in these tokens makes them undoubtedly not a scam - indeed, they are some of the cheapest safe radiation sources you can get online. They are perfect for testing homemade radiation detectors! Seriously, I'm not being sarcastic here - I highly recommend picking up one of these patches if you want to get into making your own detectors as they are an awesome way to check if your detector works. That being said, you are supporting a less than honest seller by buying these to use as test sources, so keep that in mind.

I broke one of these open some time ago (not recommend) and found that the thorium is contained in a grey-brown dusty substance inside the disc. I have no idea why the seller included this radioactive dirt in their product but I'm not complaining. That being said, please don't open these - breathing in radioactive dust is a health hazard.

If you personally believe that these things are good for your health ... well, good for you I guess, and the placebo effect will probably do you well. But claims of blocking "dangerous" electromagnetic radiation while actually being radioactive need to be called out for what they are: A load of garbage pseudoscience.

Thanks for reading! I hope you were able to learn something new from this post. Let me know if you have any questions, comments, or corrections.

All images not credited are my own. You are welcome to use them with credit.

i need to read this when I have time. commenting now so i dont lose track of this post. #scalar

Thanks for the comprehensive reply
I really enjoy your radioactive blogs!!!!

Congratulations @proteus-h, this post is the eighth most rewarded post (based on pending payouts) in the last 12 hours written by a User account holder (accounts that hold between 0.1 and 1.0 Mega Vests). The total number of posts by User account holders during this period was 2905 and the total pending payments to posts in this category was $6776.84. To see the full list of highest paid posts across all accounts categories, click here.