STEEM-Powered Hackathon - Can We Do It?

You are already eligible for being helping us create a hackathon powered by steem and other cryptocurrencies!

A group of classmates and I are organizing a hackathon in our school, above is a picture of our website for the same. The name of the hackathon is synt.hacks and it is actually an organisation created by some of our seniors from high school. You can find their pictures and bio on the synt-hacks website. The objective of synt.hacks was to provide more opportunities for teenagers to showcase their programming skills.
Fun Fact: I had actually won my first bitcoin as prize money at a hackathon two years ago. No, it wasn't 1BTC, it was actually 0.01BTC.

Due to venue issues our seniors were unable to host synt.hacks, outside of school because of the overwhelming number of registrations and lack of space for a suitable venue. They eventually decided to start out small by organising a hackathon in our school and handle a smaller number of participants.

The event was a success! You can find the pictures of the event and winners on our website. (synt-hacks.org) clickable link, if the previous one didn't work.

If you haven't realised by now synt.hacks is a pun on syntax. Can you believe it? I had to actually explain it to people!

How can steemit and steemians help us?

In order to introduce our juniors, classmates, and teachers about cryptocurrencies and steemit, I thought what better way than by raising funds from Steemit and use that to reward the winners with some crypto like litecoin, bitcoin, or even steem! For steem as a prize money, the winners will need an account on steemit in order to receive it, so maybe they will join the community in order to claim their prize. This will not be the first person who I've introduced to steemit and crypto, my classmate @sphinx, who also happens to be an organiser for synt.hacks 2017 joined steemit when he caught me browsing my feed in class one day. I explained the concept of blockchains, mining, price volatility and finally how steemit works. The very next day, he joined steemit. Sorry, went a bit off topic there.

You can help us by:

What is a hackathon?

A hackathon is a competition in which you meet people with similar ideas and collaborate with them to complete a project in a certain time limit, in this case 12 hours, and have fun doing it. The projects must be based on the theme that is announced before the actual event.

Nope, its not what you think. At a hackathon you don't hack into a government system. You "hack" on ideas with other people and create awesome stuff.

To prove that I am truly a part of synt.hacks 2017, I have added a link to this post on the About Us section of the website. Proof of me being human: 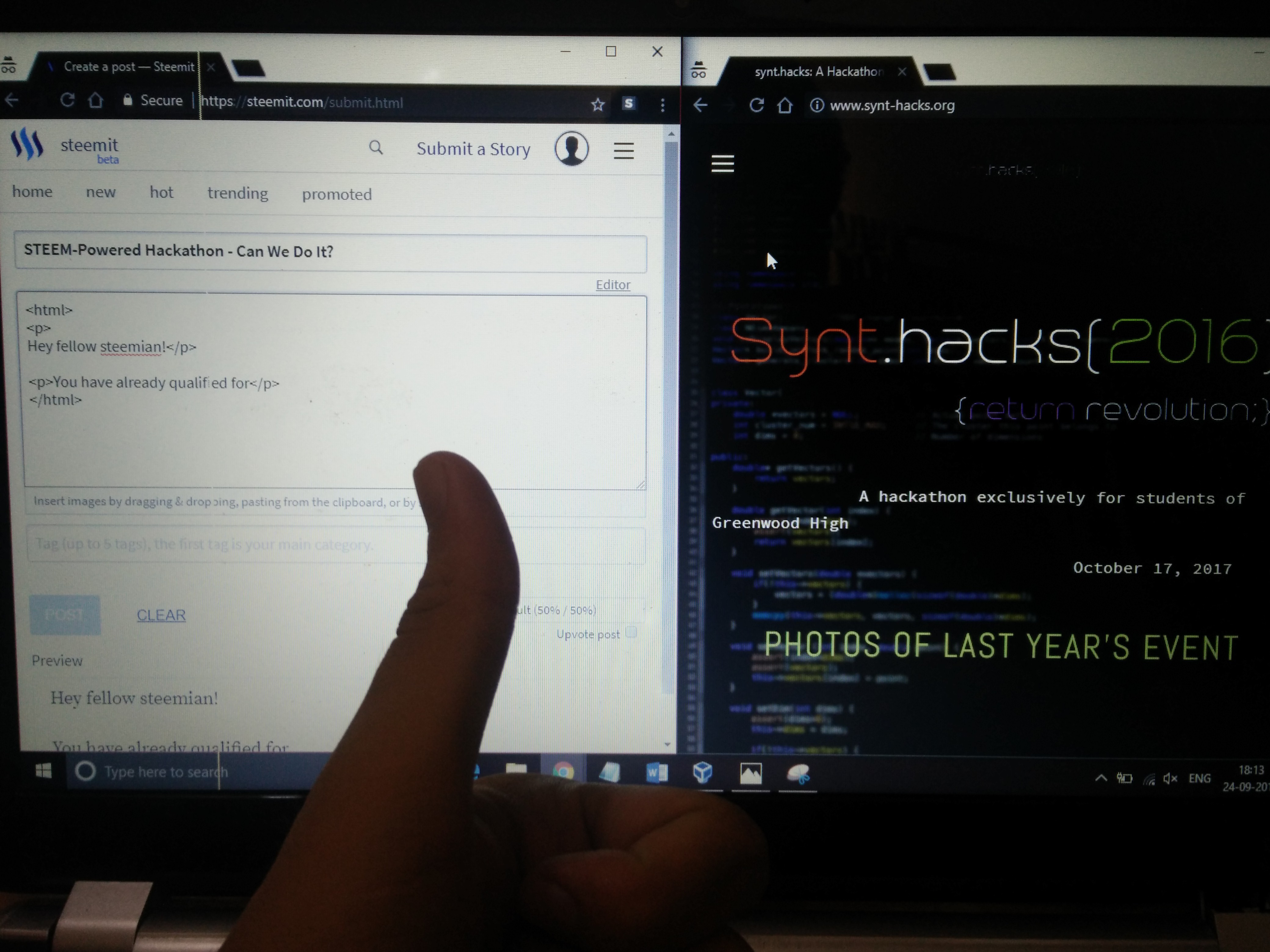 My friend @sphinx will make a post about this hackathon and will donate all liquid proceeds to this initiative. Here is the link to his post. I, too, will donate all the SBD this post makes to prize money of synt.hacks 2017. Additionally, I will donate a part of the liquid STEEM in my wallet for the same. I will also be using the MSP bot to increase post payout.


Let us try to make this steem-powered hackathon a reality!

Congratulations! This post has been upvoted from the communal account, @minnowsupport, by Sqamemal from the Minnow Support Project. It's a witness project run by aggroed, ausbitbank, teamsteem, theprophet0, someguy123, neoxian, followbtcnews/crimsonclad, and netuoso. The goal is to help Steemit grow by supporting Minnows and creating a social network. Please find us in the Peace, Abundance, and Liberty Network (PALnet) Discord Channel. It's a completely public and open space to all members of the Steemit community who voluntarily choose to be there.

This post has received a 0.16 % upvote from @drotto thanks to: @banjo.

All posts that use the TAG # fundrasiers get resteemed by @fundraisers in the aim to make a page here on Steemit where posts like these can be found easily and voted on even easier.

Congratulations @sqamemal
MinnowsPower listed your post "STEEM-Powered Hackathon - Can We Do It?" as one of the top 10 commented posts of the day...!!!
"You "hack" on ideas with other people and create awesome stuff." MinnowsPower think it's illegal too. Good Luck with your system.

Great initiative! All the best to you guys!
Upvoted & resteemed for a better exposure!

This wonderful post has received a bellyrub 3.00 % upvote from @bellyrub thanks to this cool cat: @kid4life. My pops @zeartul is one of your top steemit witness, if you like my bellyrubs please go vote for him, if you love what he is doing vote for this comment as well.