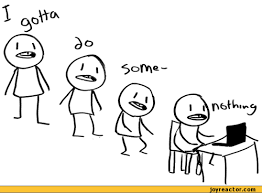 )
When you often or occasionally put things off,if probably means that what you are putting off is that thing you choose not to do at that particular time. It may not be a problem,depending on its frequency.
However, when it becomes habitual in a lifestyle,it may suggest conflict.
It could mean fear of success or fear of failure. Been successful may mean that yoy Could be in danger of not been liked by people or others getting afraid of reaching higher goals been set and then will be deemed a failure rather than attempt to reach these goals set for him.
Procrastination keeps you stuck as it doesn't give you space to confront life's opportunities,thus missing out on what could be very enjoyable and gratifying. If you decide to move out of this state of Procrastination,you could identify the purpose your Procrastination meant for you.
To help in its process,ask yourself questions, "what will happen if i do not procrastinate?" "What possibilities would b there for me?"" ,then there's a chance of moving forward.
But the problem is how to get it going.it would be easy if simple goals are set in the beginning. Give yourself a task and spread out,taking them one after the other. This could be done by giving yourself half an hour to do the task and when there is progress,add up the hours to the task,dont forget to be alert on the distractions around.
You could reward yourself for a job well done by getting yourself that which could make you do more task.
As they say"Procrastination is a theif of time" so dont let your precious time to be stolen. MAKE AN UPVOTE IF YOU GOT A LESSON.