3 years of pregnancy! A new InMoov is born. 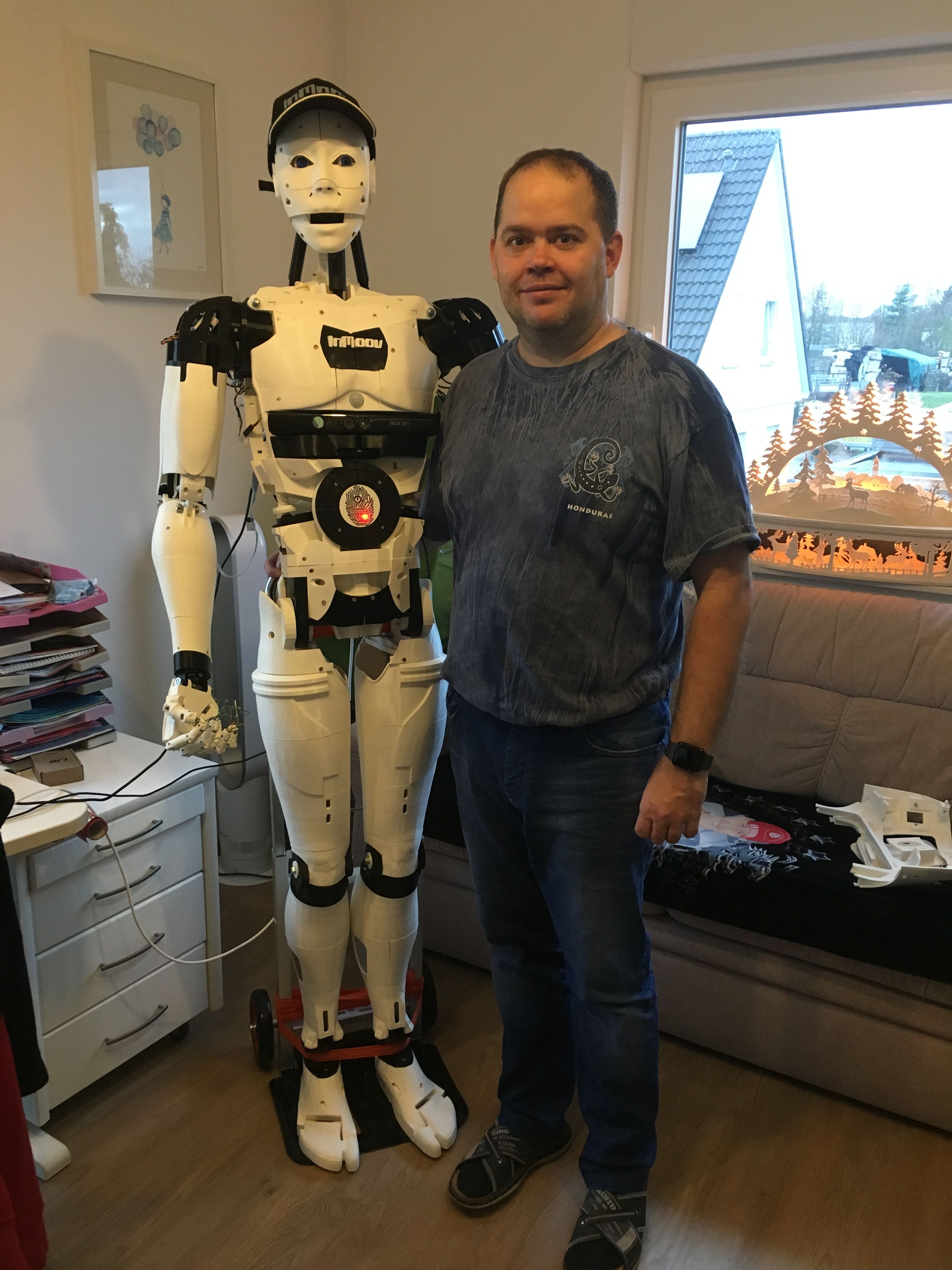 On the last day of the year 2017, my InMoov robot finally got his legs. I consider the 31.12.2017 as the robots birthday. The robot is by far not complete but is in a state where he looks like a humanoid robot.
He is like a baby, it has all the hardware ready but doesn't yet know to use it.
The primary focus will change more from building and printing to programming and teaching. It is an excellent time to do some résumé about my three years journey or if you don't mind, the three years pregnancy.

Why building the Robot yourself?

At the hype of 3d printing in 2014 while reading about 3d printing in every technical journal I started to be interested in buying a 3d printer. I wanted it more as a gadget and learn how to use it.
At this time I didn't have a real purpose for a 3d printer to justify the cost. A good printer was still kind of expensive back then.
But in July I read about the InMoov project in the German Journal "CT" . The vision from Gael Langevin, the Inventor of InMoov about building a Human-like robot, mesmerized me.

At this time I didn't know what I was starting. But I could then justify for myself to buy an expensive 3d printer with the aim of building this huge robot. Why making the robot yourself? In the beginning, it might just have been to own a cool gadget and brag about it, but I went on to be so much more.

My first printer was a Sharebot NG for 2000 Euro. I compared features with other well-known brands, and when you just saw the list of features, he did win because of its two print heads. Printing with two colors and at that time this was very uncommon, and I had no clue that this feature will never work.
To put it straight it was a harrowing experience with this printer. The first printer already had broken electronics when it arrived. But also the replacement was unreliable. I had to exchange the print head way too often and about every second print did fail because the print head got jammed for one or the other reason.
I managed to print the finger starter and one arm and head of InMoov, but it took me almost the first year to get to this point.
I was about to stop the whole endeavor. Meeting my girlfriend was also shifting my attention to other things in life. On vacation with her, I got sick and couldn't dive. So I had plenty of time to think and read and finally came to the decision that I need a new printer. I got myself an Ultimaker 2, and this was an entirely new printing experience.

3d printing wasn't the only challenge that I faced when starting with InMoov. I was new to making things myself at all.
With an education as computer science expert, I knew about programming, but that was it.

I had to learn 3d printing. Having a lousy printer at first, this was more complicated then I expected. But being able to reliably print thinks now, I wanted to start to 3d design my own ideas. Only then you feel the power of this technology.
But I also had no clue about electronics or soldering. No clue about Arduino programming. And I didn't have a workshop to put everything together either.

But all of this was slowly building up, one piece after another. Learning so many things is a fascinating experience. It was at this time when I probably realized that learning as such is a process that makes a human brain happy. If you learn something that you want to learn you put so much focus and effort in it that you end up in a flow state where you forget everything around you.
Since then I started to think about almost everything more of "what I can learn" from it.
It included traveling the same way as new technologies, new people the same way as listening to a story and reading new books.

It wasn't always easy, and I failed a few times when building the robot. It was challenging to keep the focus and to continue. Sometimes everything seemed to work, and when you turned it on, it broke down immediately. I had phases where I didn't touch the robot for a few months. Especially in summer, it was always difficult because there are so many things you can do outdoors.

I realized I needed smaller steps to succeed and reach the final goal. Building one part after another and being happy when it worked, helped me to keep the motivation.
But when I spoke with other people about the InMoov robot or showed the parts of it that were already working, that could immediately spark my fire again.Sometimes I went back to workshop the day after where I left months ago.

I am using these two principles now also in many other situations:

It is still just the beginning

The InMoov project is far from being over. Building the hardware still feels like the first step. Although a big one for me. I remember a quote from a robotics expert. "Robotics today is not about a hardware problem it is a software problem." Every time I show off my robot, someone asks what he can do. I have to admit by now he only looks impressive and he can make exciting moves. But there are not many things that are useful or unique and could just be done by a humanoid robot. After all, he is like a baby that needs to learn a lot. Luckily he doesn't cry at night.

There are so many other things to learn from here. I started to invest a lot of time in learning AI as this probably is the future that also solves the robotics software problem one day. By following my entertaining AI Guru Siraj Raval on Youtube, I learned about Steem, and that did spark my curiosity about the blockchain and crypto world.

Where does this lead too? I don't know!

Maybe one day I have an autonomous DIY robot that uses AI to replace me at work and earn cryptocurrencies? :-D

@drmake .. In my opinion sense i were 18 , "Keeping the little targets in sight and the bigger one in your dreams" is the best rule I have applied in my life . I have heard this from one of Urdu Motivational speaker in pakistan Qasim Ali Shah and the words he said touched me. I totally agree .

Indeed it is a simple truth but seems to be hard to implement. I see many people with huge dreams that they stoped following .

that's right. @drmake thaks for you so kind words.. I saved your article in my laptop by the way... #stay blessed and have more success in your life .. #respect

@drmake When I started to read this great post of yours I noticed on the picture you being literally shining with happiness staying to your newly born inmoov robot. So I started to read thinking how happy this man is. And then when I stuck on this phrase "learning as such is a process that makes a human brain happy" I understood that you have learned some to have that happy smile. Anyway, I started this post as something about robots and finished it fully inspired by your story. With my motivation increased many times. Thank you very much for this. Great story!

Hi robot overlord, how are you doing ?

I hope you teach him to interact with Steemit ;)

I like the InMoov project, they're currently building one at the local Fablab here in Bordeaux too. Wonder what they'll use him for, other than something cool to have hanging around in a corner ? XD

If the hardware is done the real work starts or should I say research. Right now he is more like an "Alexa Speaker" with Servo Motors.
You can teach him any kind of gestures but it's difficult to get him to interact with something and make his own decisions.

AWESOME. Coolest thing I've seen this year.
If I could upvote more than once I would :D