Poloniex is Lying About their SBD wallet maintenance

So about 30-32 Hours ago i made a deposit to Poloniex of 500 SBD at that time the wallet was open for deposit and withdraw both and the warning for wallet maintenance was gone so i blvd everything is in order now its been 32 hours and 30 hours since my transaction is cleared from blockchain and everytime i create a ticket and select SBD they give me automatic response that wallet is under maintenance. well fine its in maintenance so it should not be working at all right? like no deposit or withdraw should be done from it? fine even leave deposit since its not in their hands if people deposit without rechecking it from their website but what about withdraw? if wallet is not working then neither should withdraw right? i went and checked on their wallet and after my deposit they have been sending STEEM and SBD both from their same wallet to other people..now who is gonna pay when they release my coin and its making a loss? if it was stuck in blockchain that would be another problem but ITS NOT..its the poloniex who is lying to us i am uploading some images as well to prove i did do my research.
I guess i shouldve stuck with my bittrex only since their customer service is best and they never have this kind of issue.

P.S. They did not close deposit/withdraw until after like 24hours after i sent my money. 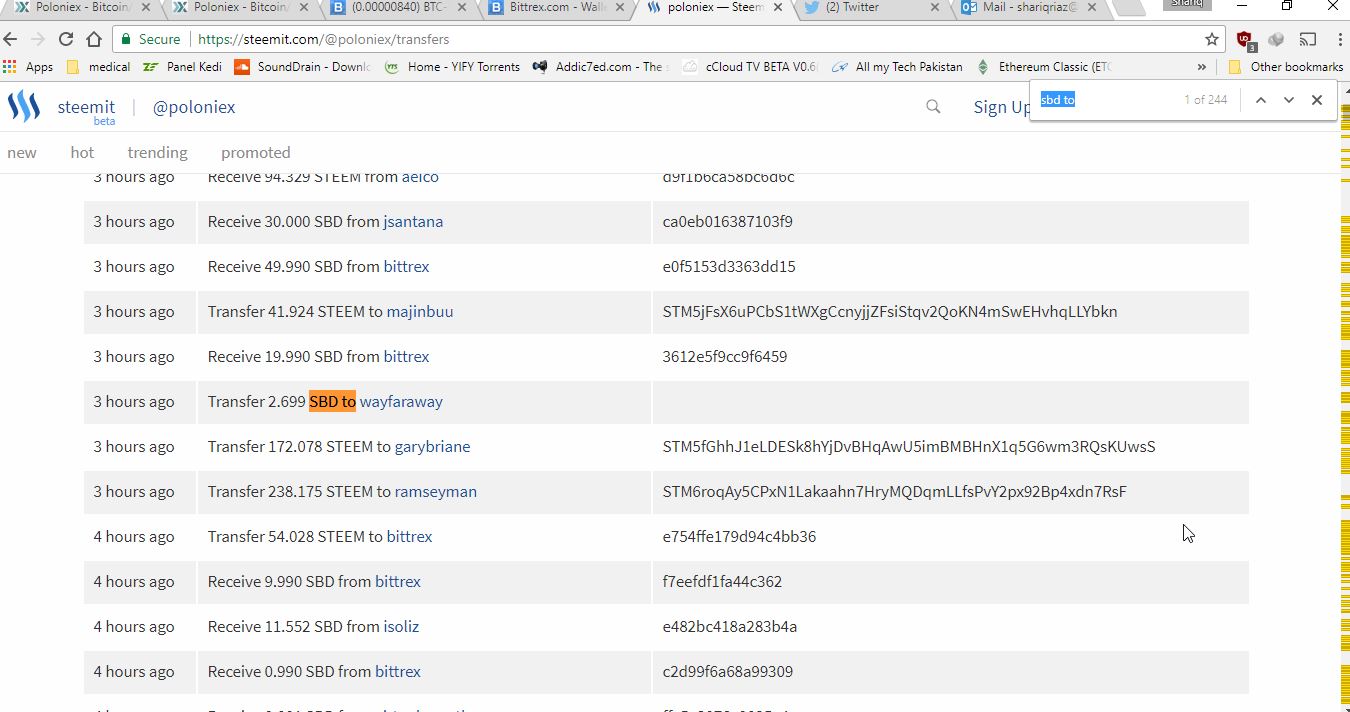 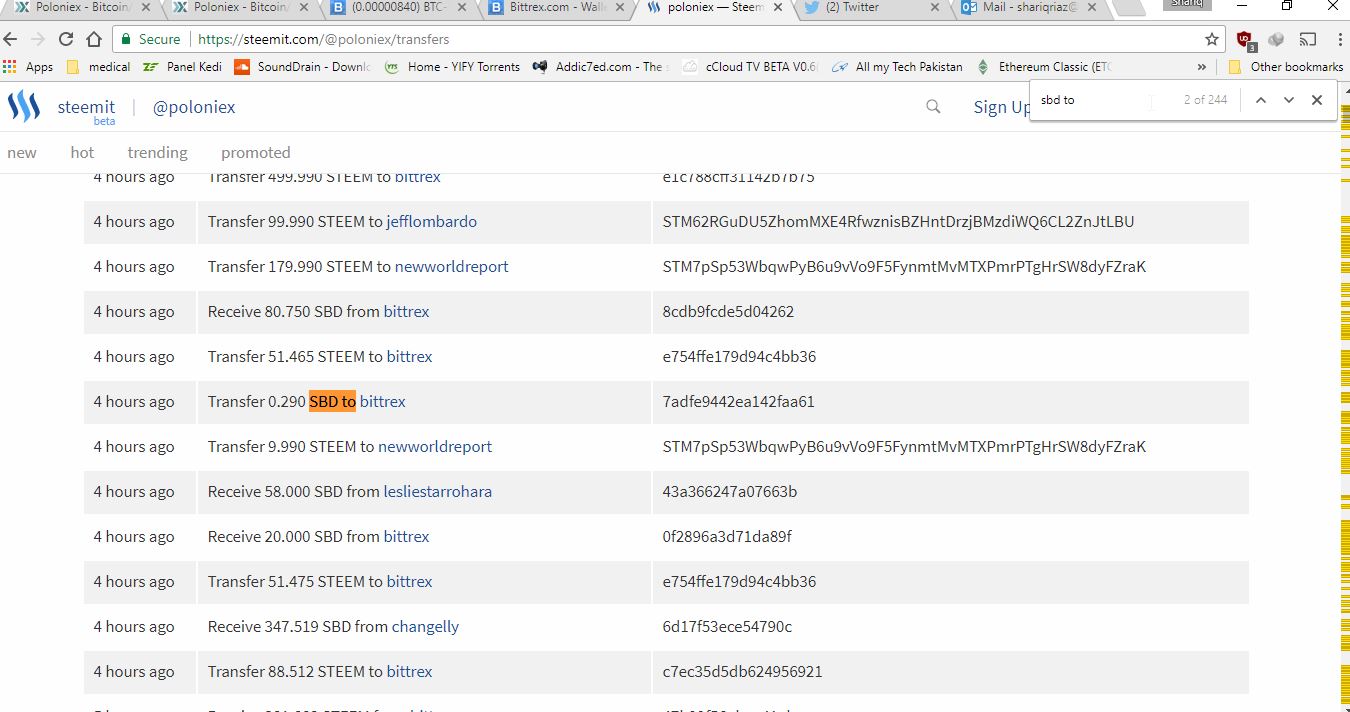 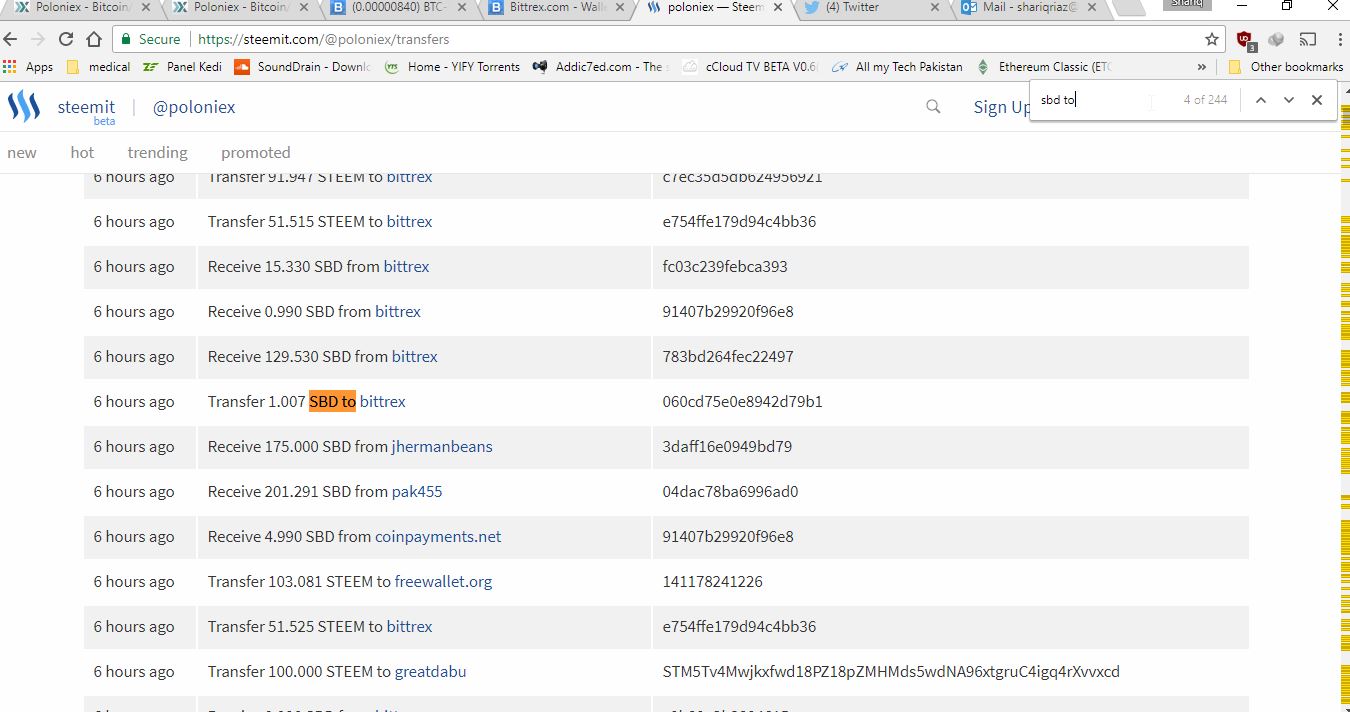 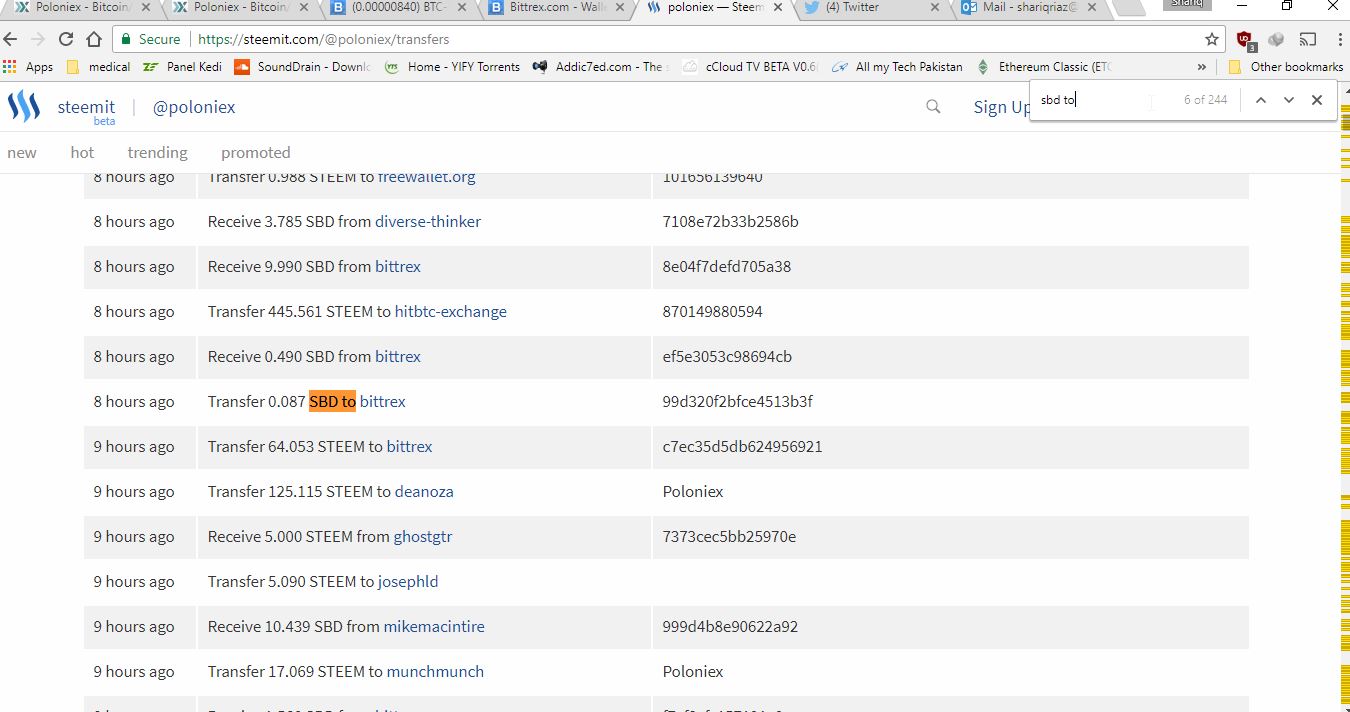 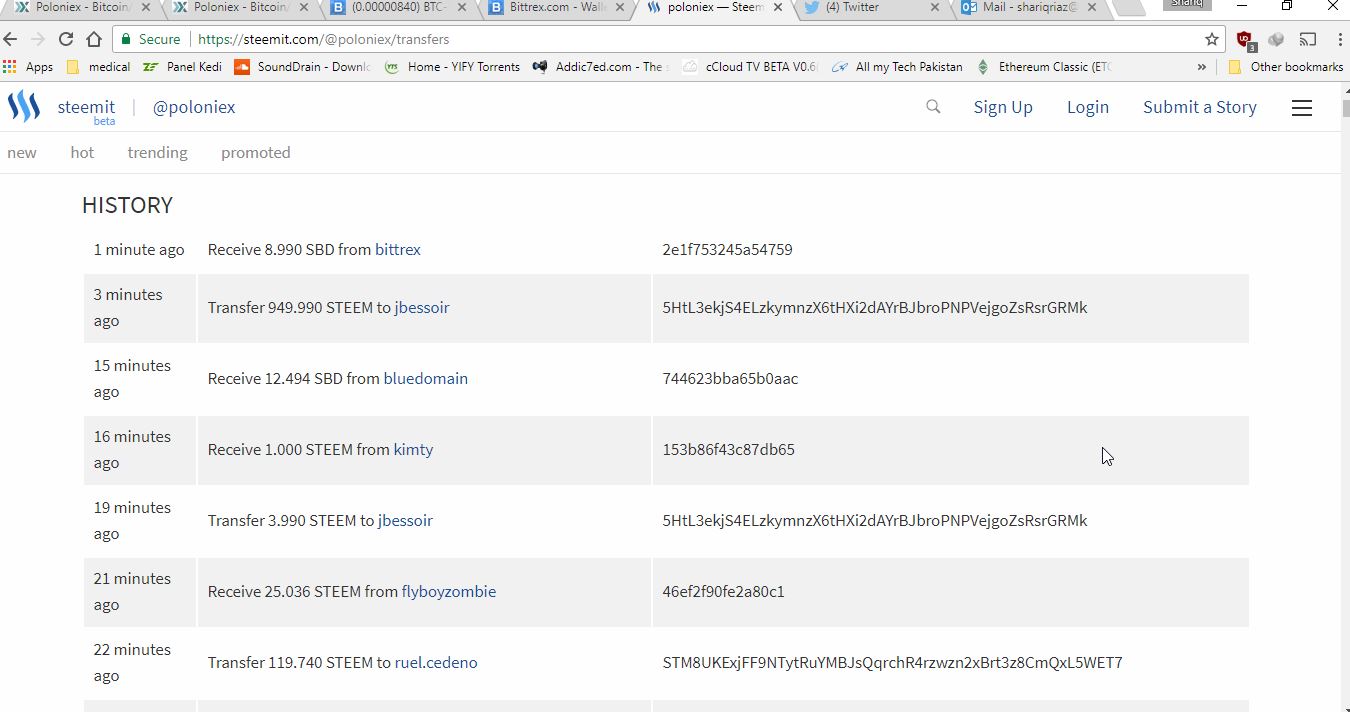 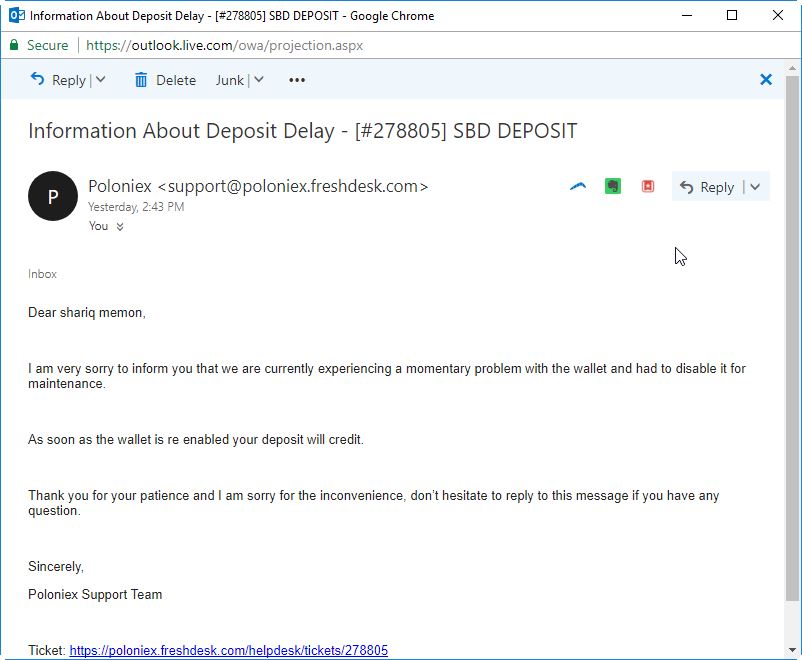 Those payments are probably them working through the massive backlog of tickets. You have not presented any evidence of a lie.

They are lying and playing people's money if they did not resolve the issue then why reopen deposits? And they emailed me they have waller maintenance but i can see transactions after mine so how does that make any sense to u? It was not a blockchain issue ot was always poloniex

What lie did they tell? Did they explicitly tell you that everything was fine? Did they respond to a ticket of yours? The removal of a maintenance warning and the fact that some people are receiving funds doesn't qualify as a lie.

I am one of the people with funds currently missing. I am disappointed in them for letting this issue go on for so long and not taking the time to communicate with the community but that is not the same as being lied to.

dude when u put something on maintenance its down one shouldnt argue on that but when that warning is gone and deposit and withdraw is allowed u expect things to be fine !! if u deposit eth right now its cleared from blockchain and poloniex has deposit option open and they dont credit ur account at same time they are continuously sending rcving from same wallet where as telling u its on maintenance thats a fucking LIE! same thing has happened here only coin is sbd not eth and rest of the damn exchanges arnt facing issues its only poloniex if they had an issue they should never have removed the warning and allowed deposit JUST like they have done with BCN it clearly says disabled but not in case of SBD so dont defend poloniex if u cant understand something

"u expect things to be fine"

Yea, that's not the same as lying to you.

"rest of the damn exchanges arnt facing issues its only poloniex"

The rest of the exchanges don't come close to doing the same volume that Poloniex does with Steem/SBD. It is entirely possible they are experiencing a technology issue that the others aren't.

A similar issue of wallets going up and down happened with SC on Poloniex while other exchanges were fine, that required a patch from the SC developers.

"dont defend poloniex if u cant understand something"

i know what lie is clear and cut wallet under maintenance guess what it works as i said LIE! another thing ofcourse its a playing with people and logically speaking hustle and lie when u put a wallet on maintenance and then turn it back on obviously anyone would think its on i think ure one of those people who create a ticket before sending or rcvding money through poloniex cuz thats the only explanation of ur stupidity here

lol check out 3rd last i highlighted it.. u can confirm it with the last picture also ...