Worse Than Watergate: FISA Memo Blows Open the Biggest Scandal of Our Time

Worse Than Watergate: FISA Memo Blows Open the Biggest Scandal of Our Time

In the memo’s wake, pressure mounts on Trump to appoint a special prosecutor to investigate the FBI, DOJ, the Democrats, and Hillary Clinton for crimes of sedition. 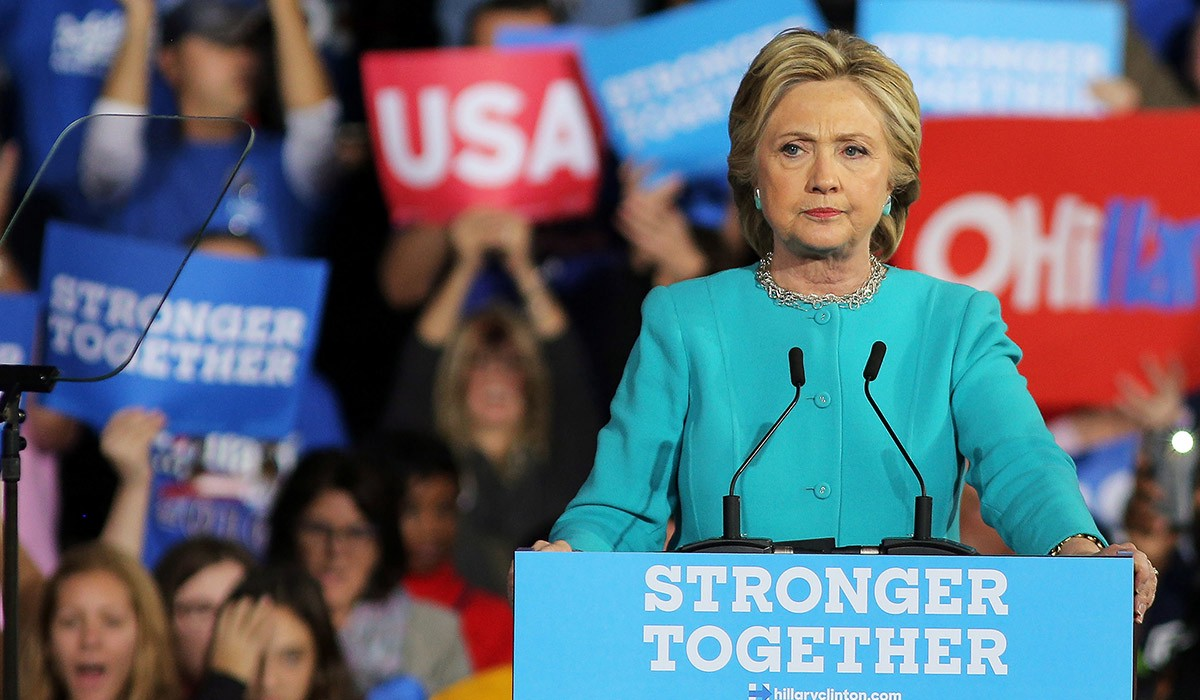 After weeks of furor from the American public, the hotly-anticipated House Intelligence Committee memo on 2016 government surveillance abuses was released on Friday, February 2, following approval from President Donald Trump. The previously-classified memo, compiled to analyze the way Obama administration officials weaponized America’s law enforcement agencies against Trump as directed by Hillary Clinton and the Democrats, exposes the dark roots of the Machiavellian scheme the Obama-Clinton regime constructed within the U.S. government to surveil and ultimately usurp Trump during his 2016 campaign and onward into his Presidency.

Recently, Donna Brazile’s Hacks exposed how Clinton covertly took control of President Obama’s debt-ridden Democratic Party to rig its 2016 primary in her favor, but her manipulation of the DNC did not stop there. As Trump and Congress determine how criminal Clinton’s takeover of the DNC was, the administration now shifts its focus to the Clinton campaign’s funding of the infamous Steele Dossier, and the extent the unverified Dossier was used to corrupt America’s law enforcement agencies and surveillance apparatus.

Originally published by BuzzFeed in January 2017, the Steele Dossier was compiled at Clinton’s orders by Christopher Steele, a foreign spy working on behalf of the shady third-party consulting firm Fusion GPS. Following its dissemination in the months before and after the 2016 election, then-Director James Comey’s FBI went on to rely on the dubious Dossier in initiating a baseless investigation into the Trump campaign, despite the glaring red flags indicating its content was unreliable that were apparent upon its publication.

As confirmed in the memo — known as the “FISA memo” or “Nunes memo,” — the dossier was compiled as ordered by the DNC and Clinton’s campaign, who paid Steele over $160,000 to obtain derogatory information on Trump’s supposed ties to Russia. Given disclosures concerning the Clinton Foundation and its unlawful international dealings with Russia, and the Clinton campaign’s fabrication of the xenophobic Russiagate hoax upon her humiliating loss to Trump, the irony here is palpable. Worse, the Nunes memo confirms that the FBI and DOJ knew Steele’s work was financed by Clinton and the DNC, but deliberately concealed these political motivations in the applications before the FISA court. Further, it exposes the FBI’s failure to disclose Steele’s personal bias against Trump, and confirms Steele deliberately misled government officials about his contacts with the media when he initially began to circulate the dossier.

Certainly, Trump’s DOJ’s ongoing review of misconduct by Comey and others during the 2016 presidential election will shed more light on the scandal in the coming months. Inspector General Michael Horowitz has confirmed the agency’s full review of the politicization of the FBI and DOJ under Obama should be reported publicly by March or April; the Clinton campaign’s use of law firm Perkins Coie to launder payments to fund the Dossier has long served the public as a clear indication Clinton is soberly aware of her place as frontwoman of what is now the biggest political scandal in American history. From here, it’s only getting worse.

To understand the severity and scale of the scandal at hand, it must be emphasized that while the information compiled in the original Steele Dossier was knowingly false, it still served as the ultimate crux of the issuance of the FISA warrants used against Trump. On Clinton’s behalf, Steele constructed the Dossier based on falsehoods from Kremlin agents who lied to Steele, who then lied to the American media and to the FBI, who carried these lies on to FISA court, where the falsehoods would ultimately greenlight Obama’s surveillance of then-candidate and later, President Trump.

History will look back on Clinton (and Obama)’s funding of the Dossier as the final Hail Mary to avoid being brought to justice for their crimes leading into the 2016 election. Senators Lindsay Graham and Chuck Grassley have already recommended criminal charges against Steele; with the release of the memo, America’s government is finally, legitimately addressing the unprecedented and unpardonable efforts the Obama-Clinton regime employed to use U.S. government agencies against their fellow Americans and political opponents.

The FISA scandal is by no means the first example of the Obama-Clinton regime using government agencies to target opponents across the aisle. The weaponization of the FBI and DOJ against Republicans comes in the wake of an IRS scandal that did the same: Federal watchdogs currently are investigating the ways Obama’s Internal Revenue Service unfairly targeted conservative political groups seeking tax-exempt status from 2004 to 2013:

The findings by the Treasury Department’s inspector general mark the end of a political firestorm that embroiled the I.R.S. in controversy, led to the ouster of its commissioner and prompted accusations the tax collection agency was being used as a political weapon by the Obama administration.

The exhaustive report, which examined nine years worth of applications for tax-exempt status, comes after a similar audit in 2013 found that groups with conservative names like “Tea Party,” “patriot” or “9/12” were unfairly targeted for further review.

Looking deeper into the IRS scandal, Obama and Clinton did not limit attacks on their political opponents to just those across the aisle from them: the report found that the IRS was also inappropriately targeting progressive-leaning groups that, like conservative groups, were mobilizing in direct opposition to the neoliberal Obama-Clinton regime.

Obama’s Democratic Party revealed in the jaw-dropping DNC fraud lawsuit hearings that it considers its primary processes not bound by the will of the voters. As if Obama’s Great Fleecing didn’t harm the American working class enough, Obama and Clinton in 2016 watched quietly as Vermont Senator Bernie Sanders raised $226,581,902 from individual contributions in the 2016 primary; knowing this money was being extracted from voters joining candidate-Sanders’ vigorous opposition to the state’s agenda, Obama, Clinton, and their co-conspirators in the DNC operated the Party in a way that pandered publicly to voters while working against their interests behind closed doors, while fraudulently soliciting progressive Americans’ time and money as they did.

The rigging of the 2016 Democratic primary gave Americans an early look at a Democratic Party operation where Clinton deliberately impoverished and disenfranchised the party’s political opposition from the left, while Obama’s administration convened the corrupt power brokers within the U.S. government in a coordinated effort against Trump and his allies on the right. As the anti-establishment wave carried Trump, a political outsider, into office, the Clinton-Obama regime consolidated the corrupt elements of America’s establishments against him. This conjoined duopoly and the unelected power structure that supported it would become the embodiment of the “swamp” that Trump promised to drain.

Since Trump’s inauguration, scrutiny has increased exponentially into the misconduct of Obama and rogue actors in his administration for the great lengths they went to in subverting democracy in their attempt to enforce the state’s power in 2016. The release of the Nunes memo exposes just one tip of many icebergs that comprise the convoluted and deepening interwoven scandals enveloping the Democrats, including Clinton, Obama, John and Tony Podesta, Debbie Wasserman Schultz, Donna Brazile, Susan Rice, James Comey, Loretta Lynch, Bill Clinton, Eric Holder, and others.

The memo’s contents expand ongoing investigations into post-election revelations from Trump that he was wiretapped by Obama, and whether Comey or Lynch had any knowledge of efforts made by any federal agency to unlawfully monitor communications of then-candidate Trump or his associates. Law enforcement should also review leaks of classified information related to the unmasking of U.S. person identities incidentally collected by the intelligence community, including how senior officials within Obama’s administration — including Comey, Lynch, Rice, and Libya war architect Samantha Power — were involved in the “unmasking” of individuals on Trump’s campaign team, transition team, or both.

GOP Congressional investigators have also recently written six letters to the key individuals and entities involved in the Obama Administration’s efforts to undermine Trump as both a candidate and President of the United States. Senators Grassley and Graham have wrote Judiciary Committee letters requesting information from each John Podesta, Donna Brazile, Debbie Wasserman Schultz, Robbie Mook, the DNC, and Hillary For America Chief Strategist Joel Benenson, for their roles in the Dossier’s funding, creation, and distribution. Leaving no stone unturned, congressional investigators have asked all of Hillary for America’s officers, employees, contractors, subcontractors, advisors, and even volunteers to provide any information they have to Congress regarding their knowledge of the dossier and related conspiracies.

The Senate Judiciary have given the parties two weeks to respond.

Obama’s most grievous sin in high office is certainly, by now, this; those aware of his work to expand surveillance programs and disregard for ethical governing in general would not be surprised to learn Obama’s surveillance of foreign heads of state ultimately extended as far as wiretapping the opposition party in America as he left office. Obama’s administration saw no issue unlawfully spying on ordinary Americans; it seems logical the administration would use this to their advantage in surveilling their political opposition too, as criminal as it may be.

Regardless, with the release of the Nunes memo, Obama and Clinton’s day of reckoning is here. While the Democrats and their allies in D.C. and the media did all they could to resist the memo’s release, it is clear that the will and might of the American people seeking to bring these criminals to justice is stronger than the combined efforts of the shadowy Deep State cabal operatives Obama and Clinton treacherously employed within the U.S. government. As Trump’s Justice Department closes in, Americans of all stripes are rallying to restore faith in a justice system that has long betrayed them.

Those analyzing the severity of the Clinton-Obama crimes understand that while treason relates to crimes of war, sedition differs in that it does not involve overt acts of open violence or assistance to an enemy; the U.S. Supreme Court upheld the constitutionality of the Sedition Act of 1940 by interpreting the purpose of the act to apply to a political creed that has a tendency to produce imminent lawless action. It is difficult to fathom how anyone could be opposed to Clinton and Obama being held accountable for their crimes; while the politicized legacy media may continue to smear Clinton-Obama critics as partisan per the Pied Piper directive, the evidence of their corruption is as extensive as it is nonpartisan.

As these scandals close in, Americans wait with bated breath for Trump to make good on his famous campaign promise to lock Clinton up. The extent to which Clinton’s corruption contaminated and politicized Obama’s Department of Justice and Federal Bureau of Investigation and staved off three Federal criminal investigations makes Watergate look like spilled milk; with the release of the Nunes memo and the investigations set to continue and deepen, Americans can rest assured more dominoes will fall quickly as Trump’s administration brings the countless corrupt actors in the Obama-Clinton swamp to justice.

Following eight years of white collar impunity under Obama, Trump’s efforts to police Clinton and Obama’s criminality have already changed America in that its corrupt oligarchs are now no longer too big to jail. With the memo and its revelations now a matter of public record, Trump can finally get on with it.

Zach Haller (Shirtless Pundit) is an independent writer, activist, and DIY journalist based out of Seattle, Washington. Support Zach here on Steemit, on Patreon, or Paypal.