Neoliberalism is eating us alive

thegreatdesigner (34)in #politics • 4 years ago (edited) 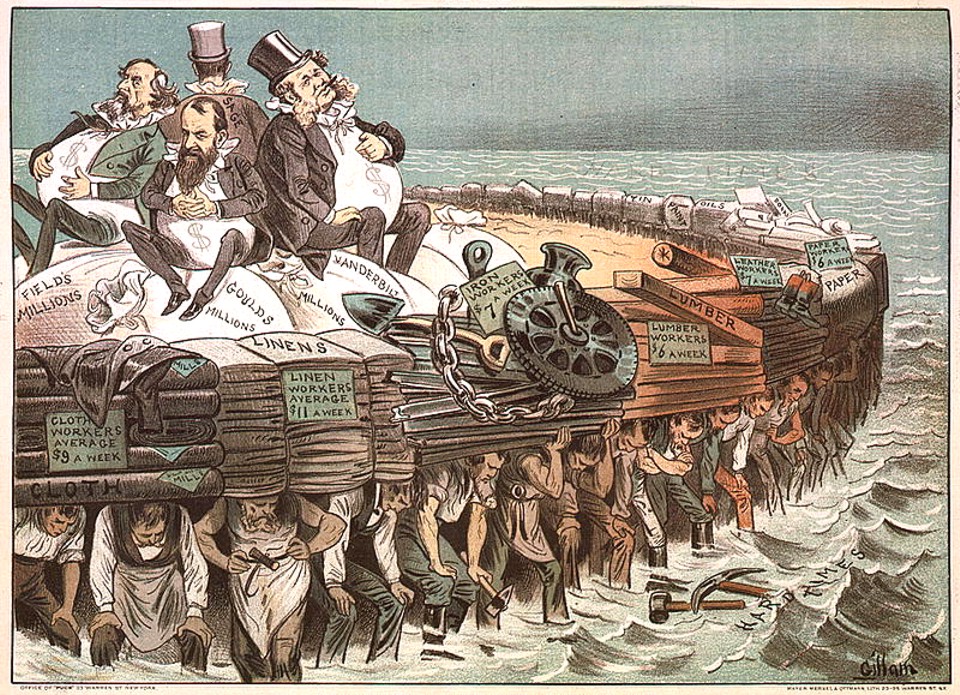 Neoliberalism is a rebirth of a 18th century type of political ideology Mercantilism in which privatization, fiscal austerity, deregulation, and unrestricted free trade dominate government objectives. Government spending is high to increase government role inside the private sector. Most think this is the same thing as Liberalism, but sadly it’s far more closely related to free market capitalism and libertarianism, and this is why so many get confused by it. In this form of free economic, low regulation, and high privatization it rewards the top with the rewards and supposedly trickles down to everyone else(Never Proven). It creates a system of classes where it's either the top, or the majority, than the bottom. Since the 1980’s a more radical form of laissez-faire capitalist ideals took over, this is also when we see the massive gaps and problems begin. Ronald Reagan to Barack Obama were neoliberals, not much has changed over the past 37 years in policy terms, but rhetoric was the only real difference between Republican or Democrat.

Adam Smith, the father of the free market economic theory, the basis for our neoliberal ideology. Smith was an absolute genius when it came to economics, but he did create the roadmap for free market theory, he also coined the term Mercantilism. It is a form of capitalism, but was mostly used in the 16th to the 19th century, during colonial days. It had imperialistic and nationalistic tendencies to it, and promoted governmental regulation to help it with augmenting state powers of others. It aimed at trading finished goods, and colonial expansion to garner the raw resources, which usually ended with bloodshed. Mercantilist policy also included a wide range of policies that we still see today, embargoes on nations, monopolizing markets, navigation acts, subsidies for companies, wage competition. It is beneficial to the powers at bay, on the backs of the rest of the civilization.

Neoliberalism is a rebirth of Mercantilism, they use the same basic principles to maximize economic output. Nationalism and Imperialism, as we seen in the beginning of the Neoliberal period with Reagan, nationalism was a key tenet to his campaign and administration. We have been using our military to overthrow and punish countries that have not worked with us. We see it now with Afghanistan and opium, and Iraq, Syria, Libya for oil and monetary systems. To use as much of our domestic land to produce energy and manufacturing(still do the most for most major industries). Especially the embargoes on countries, which weaken them on all economic fronts. Laissez-faire capitalist mindsets which keeps power in the places they have been, new technology has created new power centers. Not everything is neoliberal, but when it comes to our economic policies, even under Trump, it could be fair to criticize them as Neoliberal.

It is not hard to find the Origins of the Neoliberal movement, that has taken grip of majority of the countries in the world. We are seeing these countries fail ever since 2008, as the wages have not rises, goods cost more, and the mass income disparity is starting to show its effects. Two economic minds right after WWII saw people like FDR and Britain's welfare state as examples of communism and Nazism. In the late 40s, their book caught the attention of the wealthy class and saw it as a opportunity to free themselves from tax and regulation. They funded think tanks all over, this is when we saw the rise in philanthropy from the wealthy class rise too. The Heritage foundation is a key example of one, American Enterprise Institute, and others in the U.S and others countries in Europe. Milton Friedman, an award winning economist, one of the greatest of all times, and the father our America’s neoliberal reign; he saw monopoly power could be seen as an award for efficiency, as the Keynesian policies of the New Deal era began to fall apart in America and overseas, neoliberalism started to slip into the system and take grasp, by this time it's the late 1970’s.

At this time, we see the Late Supreme Court Justice Lewis Powell’s memorandum come out. In the very first two pages we see him describe how the “enterprise system” is under attack
“No thoughtful person can question that the American economic system is under broad attack. This varies in scope, intensity, in the techniques employed, and in the level of visibility. There always have been some who opposed the American system, and preferred socialism or some for statism. Also, there always have been critics of the system, whose criticism has been wholesome and constructive so long as the objective was to improve rather than to subvert or destroy. But what now concerns us is quite new in the history of America. We are not dealing with episodic or isolated attacks from a relatively few extremists or even from the minority socialist cadre. Rather, the assault on the enterprise system is broadly based and consistently pursued. It is gaining momentum and converts.”
This memorandum to the business class was the calling card to transform the economy into a consumer based one, and shift it from a working class one. This was during the late 60’s and early 70’s protest against the government for the war, and involving fair representation. Up until this point in history, we were never really a consumer based economy, now if you turn on the TV or even use apps on your phone, all it does is encourage you to buy this great product, of course the timing of television in the 70’s helped speed this progression up. It rewarded purchasing power, over contribution to society.
(Memo - http://law2.wlu.edu/deptimages/Powell%20Archives/PowellMemorandumTypescript.pdf)

The reason we need a serve change in policy in this country isn’t because the problems are mild and not going to have grave effects on the future. The biggest problem is that both the left and the right have been issuing the same type of economic policies and others for about 80 years, with the rise of the industrial revolution, major changes happened in government and economic policy. But since the tech revolution, almost no major policy economic or foreign has changed, it is still just a security state with maximizing profits with low regulation. This has not worked for the majority of Americans as we can see the clear decline in standard of living and cost of living for them. We see it now with the upcoming tech policies to the internet and tech giants it involves monopolization in accord to free market theory. They are both contradicting each other though since they don’t work together, only when a neoliberal snake is selling you it’s venom. Just like in the 60s, and after the depression, people need to mobilize against the elite, not each other, there is no difference from the base of the republicans and democrats, they are all fighting the same people, just fail to see it from the propaganda they get fed to stay in tribalism tendencies. We are all getting the stink side of the stick, yet we keep fighting each other instead of fighting our representatives to actually represent us, as the Princeton study shows we have no virtual representation, again. The number one goal of EVERYONE should be to get money and lobbying out of politics, until that happens it will be a massive challenge to make change as their will be a few pouring in twice as much as the rest to get their representatives ear on a policy.
(Princeton Study -

Our choice is simply, we can watch the American Empire fail on all sides, other than militarily. Or will the people in this country start to understand that the bottom 95% are all getting fucked by the very people who are telling us they are here to help. We need to demand that representatives can't take anything other than public citizen donations and limit that cap so it makes it fair, and anyone can donate an amount to influence them. We all learn about the oppression our forefathers fled England and the freedoms they fought for in the revolution in history in 2nd grade. So why are we letting these same systems of government and economic policy still dominate us, we have so many intellectuals telling us these are harming our country over helping, the empirical evidence shows these policies aren’t working for the masses, yet we continue to support them. Whether you supported Bernie, Clinton, Trump, Stein, Johnson it doesn't matter, Trump won, and whether Russia helped is irrelevant since they same economic principles are being pushed under Trump, that's not Russia doing that. It is the same power managers who haven’t had a change in their position, if anything Trump’s is the worst yet, due to the amount of disconnected billionaires controlling the very systems helping people who have nothing due to the terrible economic policies. There is a reason wealth inequality, money in politics, and climate change isn't being talked about, and it's because it would upset the global dominate balance we have had in place since after WWII. Unless the masses rise up and demand representation in a real way, the Civil Rights Movement is the best example of how to do it without non violence, mass boycotts, mass marches and gatherings, canvassing would work best. The power managers will do everything they can to demonize people fighting for this stuff, you can see it clearly on how the Democratic Party, and the liberal sides news shows demonize Sanders supporters still.

This is fantastic. I truly believe that capitalism is destroying itself. It will never die but its reincarnation will definitely include a dose of socialism. It has to when over the next 20 years half of Americans will be out of work through no fault of their own other than they are outcompeted by robots/A.I.