Clearly I suffer from logorrhea, but more important, I have suffered American politics for more than a few decades. There is not one single politician who has represented me in my entire life (I've likely lived more than half of it!) (But President Trump has, so far, done so more than any before.)

I write this to ask a few questions of a candidate, Adam Kokesh, who seeks to become the Libertarian candidate for President of the U.S. in the 2020 election.

Today I watched the video (link to which can be found in the following article: https://steemit.com/government/@tlavagabond/qcear8y2).

@tlavagabond's post is long on links but short on details relating to the title. The related DTube video seemed short on information with details for his presidential aspirations and long on cheerleading for Mr. Kokesh.

I've followed Mr. Kokesh for many years now, including as far back as his video presentations entitled Adam vs. the Man. 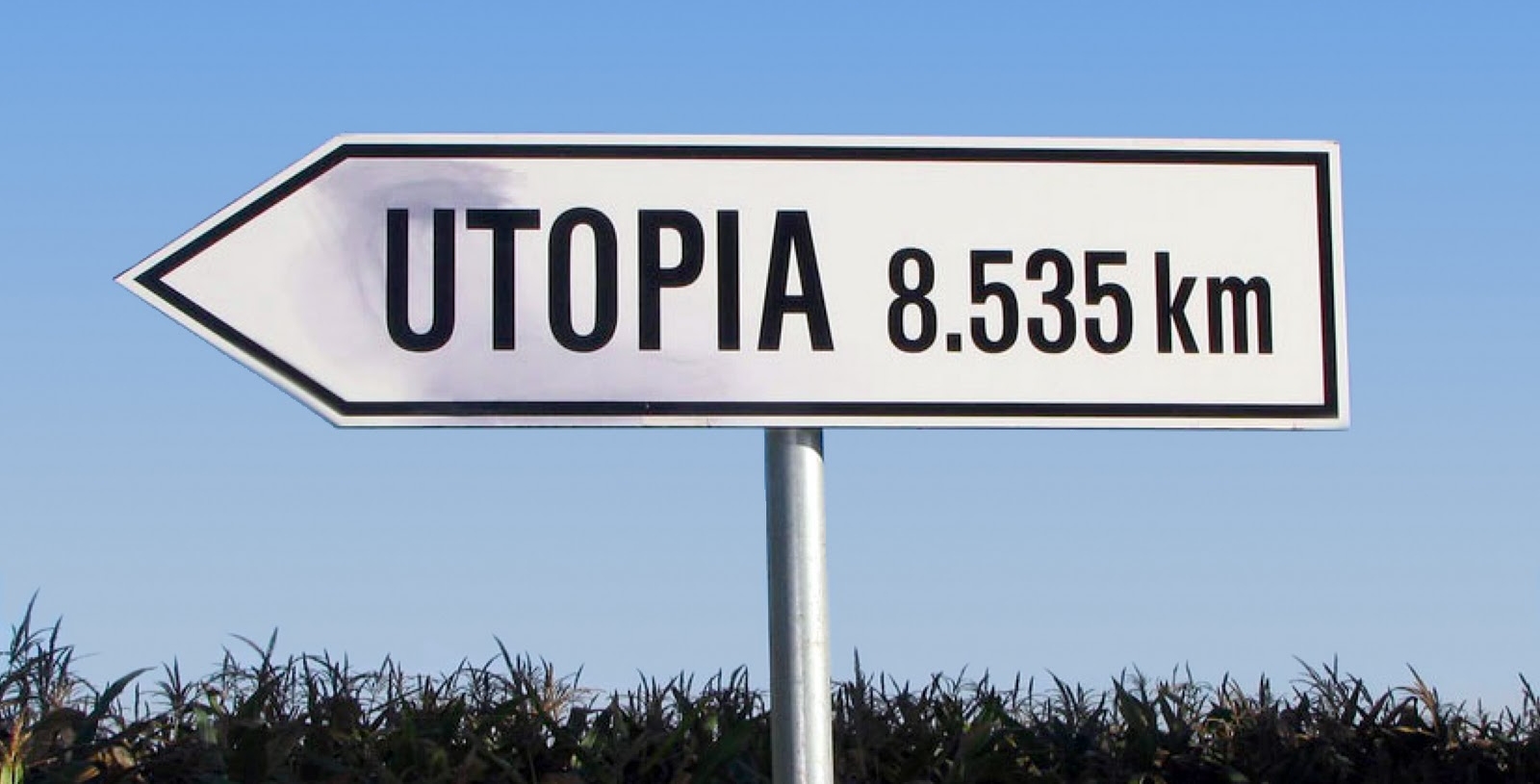 I imagine Utopia is a wonderful place. But that is not where we are. None of us really knows how to get there. We can be sure that it is much further away than 8.535 km and there are no signposts.

And if we are to get there or to move further in that direction, we'll have to get there from here. It will be a journey. We can't just flip a switch and be there magically and have here be a thing of the past, be only a story about a time in some distant history. Even if Mr. Kokesh was successful in his current goal, everybody alive today will remember the time when the U.S. had a government.

If most people had an inkling about how to make that journey we'd already be further along the path. Clearly people don't know how to get from here to there. And likely, many there are who purposely obscure any view of that course.

Instead, we have the same rabble-rousers without a real vision as we've had for all the generations since I've been alive. Ever since the U.S. has been a country. According to history, ever since humans have been organized enough to live in societies.

The now-metaphoric hippies of the sixties changed the world very little—in fact, most of them are now the cause of the problems we face today.

Today's rabble-rousers in the West, the Fascists (antifa), the neo-political (Dems and RINOs), the entrenched (communists) in academia, the social media Tyrants (Twitter, Facebook, …), these factions do nothing but give a hard on to the militarists who comprise the military industrial complex, which is more entrenched, more gargantuan, more comfortable than ever.

Ron Paul in his presidential bid several election cycles ago, ran on a platform of immediately ending five of the worst (or least necessary) federal government bureaucracies (eliminate the departments of Energy, Housing and Urban Development, Commerce, Interior and Education ). I voted for him for president (more than once). Reality since that time confirms to me that his vision would have had us now in a better place.

You, Mr. Kokesh, propose to do something even more extreme, to dissolve the federal government completely, peacefully, of course.

That is a radical departure from most libertarian platforms of the past. As I understand it, Libertarianism has historically argued for “limited government,” not the eradication of government.

I imagine that even most libertarians would object to the eradication of the military. So I'm sure you'll have a difficult challenge convincing many to dissolve the Federal government completely, even on this single issue.

I said “I imagine,” because I haven't studied to see exactly what the Libertarian platform says currently. In large part because my experience is that most “platforms” sound great, but are empty words for which member candidates are never held to account. But, let me state briefly where I'm coming from politically.

When I was a young man, I voted along liberal lines (and back then, liberal meant what today might be more accurately described as classical liberal). As I matured and realized that liberals were duplicitous and ineffective (I voted for Carter, for example), I began to vote along with conservatives, with Republicans. After a decade or two of that, it became clear that Republicans were just as duplicitous as liberals, perhaps even more so because they failed to distinguish between conservatives and RINOs. Then I tried for a decade or more to entertain the hope that the Libertarian party might hold some promise for bringing the sort of change that is needed in the U.S. to bring a return to Liberty. This was during the time of third party possibilities, of the efforts of Ross Perot and Ron Paul. After those efforts were not able to overcome the conniving of what we now know to be the fake media (long before the fake media had been exposed). I've tried for the past decade or so to embrace Anarchy. That's where I am today; I'm a want-to-be anarchist. I work regularly to become more free.

Really, what you are proposing is not libertarian, but bringing about anarchy, through the Libertarian party. It was disgusting that in the last cycle the Libertarian party ran Johnson and Weld. It has been thrilling to see Donald Trump shake things up as a political outsider. Despite the possibility of his failing, he has already delivered more on his promises than any other Presidential politician in my lifetime (back to Eisenhower). With the assistance of alternative media, he has pulled back the curtain of the corrupt legacy media, the fake media, the propaganda media. And has turned the light on the corrupt deep state or shadow government.

I assume that you know the definition of anarchy, though it is clear to me that the vast majority of the populace does not. Because I am addressing these words to others (in addition to you) I am compelled to define the word anarchy. I define anarchy as: simple rules and self rule.

Those comfortable with the way things are often purposely associate the word anarchy with violence and mayhem. Because if the real solution is seen as untenable, people will lose hope in the possibility of real change.

I'm writing these words today to ask you, @adamkokesh, a set of simple questions trying to understand how you see us getting from here to there.

I could throw you a simple question, such as explain in detail how you'd eliminate a single bureaucracy.

Take the DEA, for example. How do you get from it existing today to it not existing next month? How do you plan to assist the hordes previously employed there to find new jobs? How do you eliminate their pensions? How do you explain to people just how they should proceed regarding the new direction? How do you eliminate the portion of the prison-industrial-complex that would no longer be required as a result of just this single agency elimination? Questions such as those. That would be simple. And that would be a start if you were to answer this sort of question. But what you propose is much more complex than that.

As you likely know, at the time of the American revolution, it was only a small portion of the people who were on board with revolution. If I had to assign percentages, I'd say that maybe 1/3 of people had had enough and wanted to separate ties with Britain, wanted to revolt—and even those were tenuous because they understood that it would not come without bloodshed. Another third likely wanted to remain—a situation not unlike the Remain factions today trying to subvert the Brexit populist mandate in the U.K. today, still, centuries later. The last third were too busy struggling to live their lives, were aligned with the French, the Spanish, or some other factions, or were otherwise unwilling to participate in that struggle one way or the other.

In other words a significant number of U.S. citizens will overtly and covertly oppose any attempt at change, certainly including dissolving the Federal government.

Another crucial element of maintaining a free people, a free republic or a free association of states is that such a circumstance requires a people with an IQ significantly above 95. The U.S. is currently struggling at about 98. And of those with higher IQs, many there are who are not so much educated but indoctrinated.

Many there are who will fight against change, even minor change, let alone the major change that you propose.

This only became clear to me recently. As a fourth grader in public (government) school, I was taught the opposite. That Lincoln was the greatest, that he through the civil war freed the slaves. Now I know that to be false. The following generations of young men have been besieged ever since, to the present day. And I still have the Gettysburg address that I then memorized stuck in my head as a reminder of the damage that government schools can cause.

In recent decades additional threats to democracy and liberty have arisen such as Twitter, Facebook, Apple, and Google. Potential: great. Reality: not so much. These companies are free-market enterprises that have become gargantuan monopolies now poised to endanger the republic. Granted that these troubles have arisen within the current system with a monstrous federal government, but how would a country without any federal government be better able to keep in check such threats to future freedom?

How will you convince the feminist sirens and their anachronistic white knight protectors that they are wrong and unhelpful to a more free, more caring, more libertarian society?

So, let me ask for a detailed answer from you; say, one that describes a likely scenario about how we get from here to there regarding the most difficult task.

So my real questions:

How do you divest the military-industrial-complex from the Federal government?

How do you do that in a way that still allows us to protect our nation during the lengthy process of eliminating the federal government, until such time as the free market provides a way to protect the people here who want to live free?

How do people who want to live free protect themselves from the many others who prefer to be slaves to a nanny state?

What would stop any of the other nations of the world from invading us immediately after our military and arms-making capacity was reduced?

Short of throwing at me some non sequitur or platitude, do you have an inkling of how you as president would deal with all the complainers, the shrill third of society content in their comfort with the current status quo (from the billionaire welfare globalists to the low-IQ sheep)?

How would your presidency counter the threat from current or future 1984ish technology tyrants such as Dorsey, Zuckerberg, Cook, Schmidt, and Bezos and their minions?

Do you recognize the value of the United States as and entity—an entity that will lose it's value if it no longer has a border? Without a border the globalist invasion of this country, like most of the other Western nations in Europe will continue unabated and Western ideals will be bred out of existence. How do you reassure those of us who see value in Western traditions?

How would society deal with the influx of so many morally corrupt persons (politicians, shadow government bureaucrats, ...) suddenly foisted upon society?

Asking for a few million friends and the future of Western ideals.