The irony of this is truly incredible. For more than a year the DNC have been losing their shit over Russia's alleged use of Twitter bots to help Trump win the 2016 presidential election.

For the last week I've been tracking an army of pro-Clinton Twitter bots. These bots have been tasked with spreading the same heavily biased (and in some cases, straight up fake) news articles from a number of clone websites. So far, I have discovered a total of 7 of these websites, all of which look the same, and all are hosting the exact same articles. 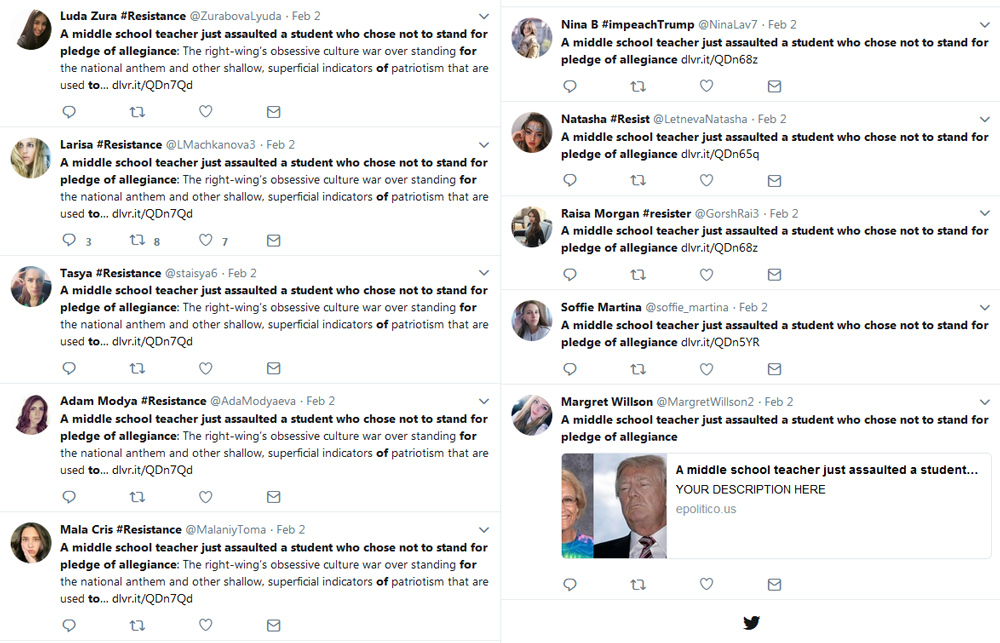 As you can see from the screenshot above the bots are pretty easy to identify. You'll also notice the bots are sharing links that have been shortened using a url shortening service. Below is the list of websites the links take you to.

At the bottom of each of the cloned articles is a message that says, The post ..... appeared first on Washington Press, with is a link to the original article. After clicking through to the Washington Press website, at first glance it looks like any other low budget Wordpress news site. But after reading some of the content it's quickly apparent that the website is filled with extremely biased, over sensationalized, over exaggerated, unverified bullshit. These articles were obviously written by someone, or a group, who harbor a deep hatred for Trump and his party. Below is the link to the original story from the Washington Press website.

Now, I haven't actually verified whether this particular story I'm using as an example is fake or not. At the moment I'm simply using it to track back the source of the bots. This particular article was written by a Colin Taylor. In Taylors Twitter bio he states he is the Managing Editor of both Occupy Democrats and washpress_news. (Remember the organization Occupy Democrats as we will be returning to them a little bit later.) Interestingly, Colin Taylors profile at the bottom of the article on the Washington Press website neglects to mention he has anything to do with Occupy Democrats.

Also at the bottom of the Washington Press article in big red letters is a "Call to Action" link asking people to sign a petition to impeach Trump and Pence.

Clicking on the "Call to Action" link takes you to an unofficial petition page on the OD Action website where you can leave your name and address.

WHO ARE OCCUPY DEMOCRATS?

Occupy Democrats is one of the largest Democrat supporter groups boasting over 7 million Facebook followers, and more than 40,000 Twitter followers. Below is an article from last year profiling the twins that are behind the organization.

Omar Rivero is standing cross-armed in his light-filled Los Angeles pool house, urging one of his employees to finish a meme about the "Republican Hypocrites of the Year," when the news breaks: The president has just signed a memo banning transgender people from the military. "Oh, I hate Donald Trump!" Rivero exclaims after his girlfriend reads the breaking story aloud from a Twitter feed.

BuzzFeed's Silverman estimates they could be making six figures in ad revenues every month. But the site has also been dogged by fact-checkers, sued by a competitor, and mocked by conservatives.

The article goes on to say that even left leaning fact checking websites like Snopes and Politifact have called Occupy Democrats "partisan and unreliable". 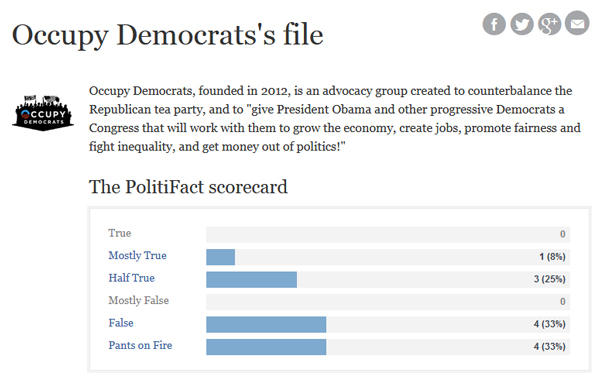 OD Action is the newest iteration of the Occupy Democrats movement. OD Action has only been around since the last summer so is still small compared to its parent organization, Occupy Democrats. It seems to me that this latest version of the organization was created in an attempt to try and detach themselves from the fake news label that's been applied to Occupy Democrats by various fact checking parties over it's short life.

With over 10x more engagement than RT this is way beyond hypocrisy. I don't need Twitter, Facebook, or an intel committee hearing to tell me that this is a continuing concerted effort to shape the narrative and to undermine the democratic process. Where is the special senate meeting looking into this? Where is the mainstream media and public outrage? Well, we all know there won't be any because they are all complicit in the greatest psyop the world has ever seen.

- If You Would Like To Help Me Make More Great Original Content Please Consider Upvoting and Re-Steeming -
#technology #psyops #conspiracy #propaganda
3 years ago in #politics by fortified (66)
$120.84
61 votes
Reply 47

Geez mate that's good work.
Why can't the DNC idiots just let it go FFS!? Talk about bad losers.
It just goes to show how afraid they must be that they're going to end up in jail for the litany of crimes they've perpetrated during and since Obama came to power.
If this was any other President at any other time this BS wouldn't be happening, Trump may not appear to be keeping all his campaign pledges yet but he's got these criminals quaking in their boots.

Yes it's beyond doubt they are criminals and I hope they are treated as such sooner rather than later. Unfortunately in a lot of these cases thought these crimes are only ever discovered after they're dead.

not jail . . . Hillary knew. The penalty is hanging.

Keep up the press!

Thank you.
Yes it is. They sure are slippery. It's fun though, because they are so dumb they are so easy to expose :)

Some great research here @forified this story has more twists and turns than a Hitchcock film!!

When will people awaken to the fact that the majority of their foundations are built upon a propagandistic lie, when will they realise that the emporor has no clothes? I just can't believe that people fall for this shit over and over again!!

The Democrats desperation to cling onto their vanishing vaneer of power is quite frankly embarrasing. Equally if it wasn't so serious it would be laughable that people still continue to believe and follow this narrative. As always I appreciate the work you've put into this, great stuff!!

Thanks. I worry that some people are so far gone that even with all the evidence they still won't believe it. I'm still tracking these bots so there will be an update soon.

Thanks. And thank you for covering it in your latest vid.

As per our previous conversation, is there any connection between Occupy Democracy and Share Blue (David Brock)?

Ah, yes I have found loose evidence they are one of the same but I've yet to confirm beyond doubt. I'm still digging. ;)

This is an amazing post. Good job comparing the RT and OD stats, and your final paragraph is spot on. Really impressed, well done!

Hey, thanks for your support. Yes things always make a lot more sense when you put them into context. I always wonder if Occupy Democrats was just satire to see how many stupid Democrats would send out images with false information.

Ha yes. It wouldn't surprise me if 4chan were behind it.

lol the irony is too good!

Kind of reminds me of a statistic I heard that says that, if an individual accuses their spouse of cheating, THEY are surprisingly likely to be the one actually cheating. How many twitter bots and facebook bots are there for Occupy Dems?
Without numbers I can't tell how big the problem is. Thanks for your work.

The engagement stats give you a good idea of the total reach of these orgs. I'm working on the number of bots. Will post an update soon.

All they want is government to take care of them and it's sad.. I don't know what their goal really is, if it's freedom then you need less government everyone knows that, or at least I thought... can someone tell me I'm wrong?

what's funny is I see a lot of memes from them they are still posting that are clearly from before the election, which makes them hilarious.

Maybe their hearts are not in it any more because they know they are losing.

just going through the motions and cashing the checks no doubt

Now that was a good load of digging!

How'd you find the bots?

Hey, Thanks.
Started with a screenshot I found of some bots on twitter

Wouldnt expect anything else...

I wonder how many of the accounts are from out of country, or how many of them are paid for. I read that you could buy followers on both YT and FB, so the follower and engagement numbers, do they really mean anything anymore? But lots of people like kool-aid. Lots of people just like to hate, does not matter who they hate, so long as they have someone or something to hate, they think they are happy.

That was a lot of digging/dumpster diving you did.

Thanks. Yes, likes, follower, retweets etc can be bought quite easily. But looking at the scale of this operation in comparison to some super spam operations on twitter this one seems relatively small, so they could just have easily had one person spend a couple of days setting up a 100+ accounts. Once the accounts are set up they can then just be automated.

Highly rEsteemed!
This is a very deep dive into the reality of "Narratives."
EXCELLENT WORK!

Well, we all know there won't be any because they are all complicit in the greatest psyop the world has ever seen.

I'm going to take a BOW for this one ; )
I cannot look at the "Regular" internet anymore. Ha. Thanks as always. The curtain is slowly being drawn back

Democrats wasting their time over propaganda. @fortified I see you.

this bot is the very good service. for steemer

Sure thing my friend. share it far and wide.

Your posts are very useful make us all thank you friend