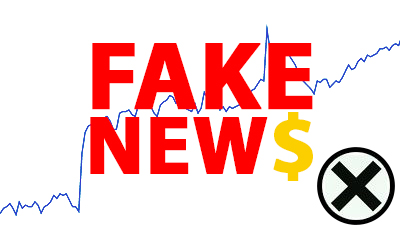 Ever since the DNC leaks back in July 2016 ,rumors, hearsay, fake news, and lies about Trump working with Putin to covertly manipulate the outcome of the 2016 presidential election have saturated and poisoned the main stream media. At one point nearly all the major news networks covered fake stories, with some even having to retract certain articles. 2 of the most high profile news organizations to jump on the Trump-Russia bandwagon were, and still are, the New York Times and the Washington Post.

You would think that after embarrassing themselves on several occasions this year following reports of exclusive and breaking news stories which later turned out to be fake both newspapers would have learned from there mistakes and started to report on real world news that actually matters. It's not as if there isn't enough crazy stuff happening in the world already. So why do they continue to compromise their journalistic integrity? Well it turns out they do it for the money, because fake news yields you a very tidy profit.

The New York times has been caught out on a number of occasions in their quest to find the smoking gun that's would result in Trumps impeachment. In a recent undercover video by Project Veritas exposing the NYT, an employee was recorded openly admitting that ultimately the Trump-Russia conspiracy was good for the 'bottom line'. They even have a name for it, the 'Trump Bump'. According to the New York Times Senior Staff Editor who was caught on camera, online subscriptions have 'Sky-rocketed' since the election. This came only a week after another NYT employee was secretly filmed in a previous undercover video confirming that Trump was good for business.


Even back in March of this this year the NYT was celebrating the success the 'Trump Bump' bought them. Since then their subscriber base has risen to around 100,000 sign-ups a quarter.

The goal: accelerate the acquisition of new news subscribers. At last report, the Times counts 2.1 million digital news subscribers, after the Trump Bump more than doubled its growth. Now, it's growing at a pace of about 100,000 a quarter -- still a good number -- but one the Times wants to ramp up.

The numbers don't lie either. Here we can see that literally within days of Trump's inauguration the New York Times global website ranking began to climb steadily from the 130th most visited website in the world to their current position of 109th.


Finally, if we take a look at the financials we see their share price has really benefited from all the fake news and even reinforces their motivation to quickly jump on the anything remotely related to Trump or Russia.

The Washington Post, unlike the publicly traded NYT, is a privately owned smaller news outlet. Never the less it's still had it's own fair share of controversies when it comes to reporting on the the Trump Russia conspiracy. The Post, which is owned by Amazon fonder Jeff Bezo, has reached record high's in the number of digital subscribers they have gained, more than doubling their online sign-ups since the beginning of the year.

"Earlier this year, we crossed the 1 million mark for paid digital-only subscribers," the Post's publisher Fred Ryan revealed in an internal memo on Tuesday.

The Post, like several other national papers, has been focused on signing up as many paying subscribers as possible.

... the resurrection of The Post, both editorially and financially, in less than four years has been little short of astonishing........ The Post had 78.7 million unique users and 811 million digital page views, trailing only CNN and The New York Times among news organizations.

“The published numbers speculating about our subscription and ad revenue have so underestimated the reality that it’s comical,” The Post’s chief revenue officer, Jed Hartman, told me this week. “Our digital ad revenue is in the solid nine figures,” that is, in excess of $100 million. This year, he added, “we’ll have our third straight year of double-digit revenue growth.” ....... He said digital subscriptions had soared this week in the wake of the latest Russia revelations, as they have with other scoops. In the first quarter of this year, The Post says, it added hundreds of thousands of new digital subscribers.


“I’m very, very surprised by those numbers. No one else is even coming close. If that’s correct, I’m very impressed.”
- Craig Huber, Huber Research Partners on Washington Post statistics -


Again we can see here the same trend happening with the Washington Post's global rankings. Starting within days of Trump being sworn in as President traffic to the website rose considerably placing the Washington Post as the 186th most visited website in the world.

The rapid growth of the Washington Post can be attributed to a number of things other than fake and sensationalized news stories, among them is the fact that since Jeff Bezo took over the Post has actively hired hundreds more editors, reporters, and technology staff.

I personally believe that another reason the post has become so successful recently is because ultimately, through Jeff Bezo, the CIA, Clinton Cartel, and deepstate are the ones actually pulling the strings to control the narrative, or as the US Department of Defense likes to call it, 'Perception Management'.

Actions to convey and/or deny selected information and indicators to foreign audiences to influence their emotions, motives, and objective reasoning as well as to intelligence systems and leaders at all levels to influence official estimates, ultimately resulting in foreign behaviors and official actions favorable to the originator's objectives. In various ways, perception management combines truth projection, operations security, cover and deception, and psychological operations.

This kind of business model is surely unsustainable. There's only so much crying wolf someone can do before people start to ignore you. Not only is all this fake news bad for the future growth of both businesses, but more alarmingly its also very damaging to peoples well being. These newspapers are in powerful positions, not by accident either I'm sure, and most people don't have hours to spend each day fact checking and trawling the internet trying to get to the bottom of every breaking news story, so they've come to rely on the MSM as a source for factual information. Conducting the greatest psyops ever witnessed on the world has effectively shaped and manipulated peoples reality to such an extent they've ended up confused and full of contradictions.

The worst part about it all is that the people who own shares in the NYT would be happy to see the fake news continue.

- If You Would Like To Help Me Make More Great Original Content Please Consider Upvoting and Re-Steeming -
#news #fakenews #deepstate #psyops
3 years ago in #politics by fortified (66)
$107.76
32 votes
Reply 21

Gonna be honest ,took me 2 words only to upvote you" Fake News " those are my favorite words. 😂

The fake news phenomenon is a very interesting spectacle to observe from an anthropological point of view. It is literally driving a large portion of the world insane.

The truth is though buddy, if they told the undiluted truth about Hitlary and the criminal scum in her circle of ever dwindling friends they would've made even more money such are the stories.
Can you imagine the headlines across the world if that happened?!

So true. Just goes to show that there is something a lot bigger going on here. The greatest psyops the world has ever seen.

They make me sick and I am pretty sure they will pay in the end for their sellout of their country and humanity.

The New York Times is Block Buster Video and they don't even know it yet...

HAHAHAH this is awesome, stealing this fosho

@fortified The DNC are a bunch of crooks. Insanity, corruption and crime. That summarizes the DNC.

@fortified Their candidate was Killary. That says it all.

Several paragons of "journalism watchdogs" suggest that journalists be the adults in this room, stop the non-stop reporting on Trump, ease-off, check the facts and get it right...don't be in a rush." Wow really? Come-on we know wink-wink, fake news-sells! If the lame-stream media wanted to diffuse fake news... it would stop producing "fake news " You are spot-on!

Thanks. unfortunately when money and profits are involved some people will do anything.

Hey haven't seen you about for a while. Hope you are well.

Just found you. I'm brand new and just beginng to learn to use this platform. Enjoyed the read

Thank you. Welcome. I hope you enjoy your time here.

they don't care about money... wapo mission is to be able to defend bezos against break up for competition laws... he shit his pants, and knows that one day a few suits will enter his kingdom and no one will be able to stop him to receive is security letter... then he will have to chose, fight the us gov in war against the military industrial and intelligence complex and die like rabid dog or surrender and accept that even life is temporary... I am not sure what he will chose... he seems to prepare for the fight :). fun...

If people only knew what a sad sack o shite that whole "Russians Hacked Us!" claim is... When the FBI/DHS released that little "how to be mistaken for a Russian hacker" pamphlet it took me five minutes to find a good selection of those toolkits, plus the author of the DarkEnergy RAT package (he's a Ukranian aeronautics student, goes by "Cr4sh". The five minutes was because the hounds wanted out. First search, malware archive on Github, the largest open-source software hub on the planet. I'm not really a hacker, I just enjoy stealing and doing bad things, but I do know the scene well and I've been soaking in it for 35 years. Oh, and if you pirated DIrecTV in the late 90's, you're welcome! :D

Here's some scene info for you. Russian hackers are buckaneers. They do what they do, get what they can get, and often their targets are things that they can sell along to the Kremlin who are willing buyers. It's a good system for all. Hackers get fed, Kremlin can keep an eye on them (they're usually anywhere from loosly associated with to tightly bound to the Russian mob), gives the Kremlin arms-length deniability, and the hackers get a bit of a free pass so long as they don't fuck with The Bear. Guicifer 1... he fucked with the bear. But the NSA knows all this of course, and of course has no interest in actually tracking down Fancy Bear or they'd oh, maybe see who's paying the bill at their service provider, seeing as they're based in San Diego or something like that...

Gosh reporters are smart ain't they! Still haven't figured out that Trump was completely flat broke at the end of last year, beginning of it too! Took me all of an evening going through his F.E.C. declaration, tracing companies back to Delaware P.O. boxes, listed assets of one dollar each! Riot! And not one of them bothered to question why the best hackers in the world couldn't get their shit together enough to find the current email list for the Clinton campaign, used lame Powershell script exploits (and failed!!!), didn't bother to update the BY DONATION level malware they used, forgot how to spoof an I.P. address, and seem to have completely forgotten that there are these things called VPN's.