President Duterte from the Philippines wants death for drug addicts (Is this humanity means?)

Philippines right now is in the state of corruption and leaders who runned this country are likely called Snakes because of their ability to take or let us just say to steal money from taxes.

President-elect Rodrigo Duterte believes these addicts are better off dead because they would eventually commit crimes to sustain their addiction.

In a 42-minute speech laced with profanities, Duterte told a crowd of about 10,000 that he wanted to be honest about how he would address the problem of illegal drugs.

Now, I see children as young as one year old, 12 years old getting raped and dumped. I have a grandchild. Can I be assured that my grandchild will not become an addict? Can I really prevent things from happening if I am no longer around to prevent it?,” he said.

Duterte said that the Philippine Drug Enforcement Agency (PDEA) placed the number of drug addicts in the country at three million.

The President-elect said that most addicts, who had been in rehabilitation for six months to a year, could no longer be helped since their brains had shrunk from illegal drug use.

The first to be gone is the cognitive. They talk suddenly like crazy persons because their cognitive sense is gone. No sense,” he said.

The loss of reasoning has led many drug addicts to commit crimes like rape, robbery and murder, according to Duterte.

Duterte said not all drug addicts could be put in jail or rehabilitation at the same time.

With them out on the streets and likely to commit crimes any time, Duterte said it would be better to kill them.

Duterte admitted that he might be subjected to scrutiny by the Supreme Court for killing criminals but he already had an explanation on hand.

Judge, they ask for it. I have long warned them in Cebu to stop using drugs. Now, they still have not stopped. They ask for their own death, not me,” he told the crowd.

Duterte also warned police officials who were protecting illegal drugs to stop or they could “go to hell, go to heaven or go somewhere else.”

He advised those who involved in the drug trade to look for other jobs. Otherwise, he added he would apologize ahead to the families of the illegal drug peddlers and addicts who would get killed in his campaign against illegal drugs.

Duterte said that he could only bring more investments in the country if drug addiction — the problem triggering many other crimes — was stopped.

Duterte arrived in Cebu past 5 p.m. on Saturday to attend a wedding of a daughter of a businessman-friend at the Shangri-La’s Mactan Island Resort and Spa in Lapu-Lapu City.

He arrived on the Sugbo Grounds at the South Road Properties past 10 p.m. but he spoke to the crowd about an hour later. He left past midnight and took a private plane back to Davao City.

His speech focused on how he planned to solve the problems on illegal drugs and corruption that were plaguing the country.

It was the second victory party for Duterte who received more than one million votes in Cebu even if most local officials went for Liberal Party standard bearer Mar Roxas.

The first was on June 8 at the Cebu Country Club in Cebu City hosted by the Bisaya na Pud Movement, a private group who campaigned for his presidential bid.

To end corruption, Duterte said he planned to put up 12 phone lines where the public could call him directly and report the corrupt practices of government officials and employees.

The hotline numbers would be manned 24 hours, he added.

“If you want to help the country, now is the time kay madungog gyud nako imong istorya (I would hear your stories),” he said.

Duterte said he was not a mean person but would be forced to be so if people would not listen to him.

Under his administration, Duterte said he would like to put an end to the long lines at the BIR, the Land Transportation Office (LTO), and the Department of Foreign Affairs (DFA).

He said that applicants for licenses or passports should be advised to return on a specific date so they would not have to wait in line.

The same thing should happen in the issuance of police clearances and the processing of death benefits and pension of widows of policemen and soldiers.

He said widows should not be made to go to the office in Manila for the processing of benefits.

Instead, the main office in Manila should process the claims and send the approval papers to the regional offices so that widows would no longer have to travel that far. 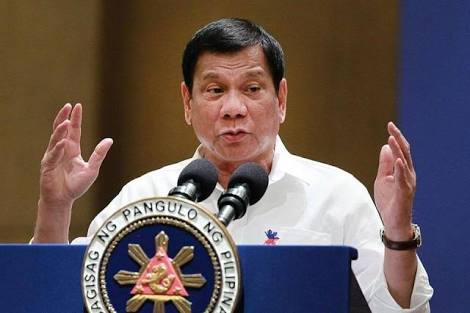