caitlinjohnstone (71)in #politics • 3 years ago 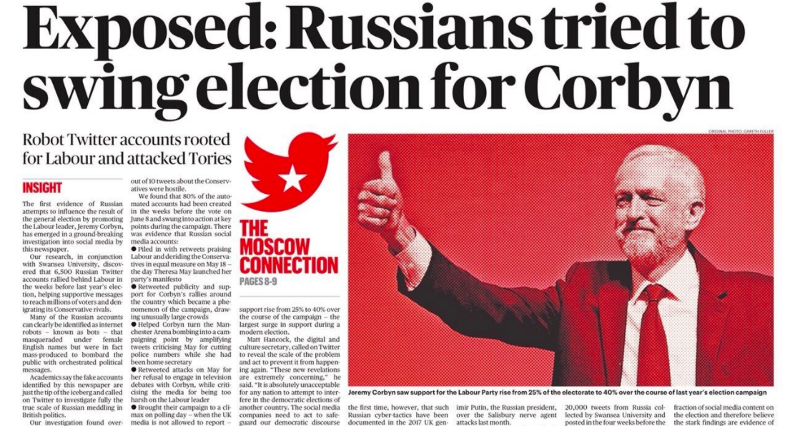 For months leftist analysts have been warning that the increasingly hysterical anti-Russia narratives being aggressively promoted by the western media would eventually be used to target the political left. Those warnings went largely unheeded in the United States where the Russiagate narrative was being ostensibly used to undermine the Trump administration, and the McCarthyite feeding frenzies which have become normalized for American audiences have now metastasized across the pond to the UK.

As a result, the Poms have now quickly found themselves in a political environment where anyone who remembers the Blair government's lies about Iraq is smeared as a "useful idiot", a private British citizen can be falsely labeled a Kremlin bot by a mainstream publication without retraction or apology, and a BBC reporter can admonish a veteran military analyst for giving a truthful analysis about the alleged Douma chemical attacks on the grounds that it could hurt the "information war" against Russia.

And now, in what is undeniably a whole new level of Russophobic shrillness, Russia is being blamed for the gains made last year by Jeremy Corbyn's Labour Party. According to a tweet from The Sunday Times, tomorrow's headline will read, in all seriousness, "Exposed: Russians tried to swing election for Corbyn". According to the text in the preview, the Times has allegedly found evidence that Russian bots have been retweeting publicly available posts supporting Labour and criticizing the Tories. Not creating fake news, not even circulating articles from RT or Sputnik, but retweeting conventional, publicly available political commentary.

This would be the same publisher, by the way, whose expertise on Russian Twitter "disinformation" recently led to a false allegation against an antiwar Finnish grandmother in an article about Kremlin trolls.

Tomorrow's Times front page features Corbyn against a red background in very much the same way the BBC superimposed his image in Soviet-looking garb against a red-colored Kremlin skyline last month, with a red Twitter logo plainly intended to evoke Cold War memories of the USSR flag. They're intentionally calling up old, generational fears of communists to smear a leftist politician as a Kremlin tool. It's about as subtle as a kick in the throat.

Hey, Sunday Times? How about fuck you, actually? Fuck your brazen attempt to keep the British people from reclaiming what is being stolen from them by an increasingly corporatist neoliberal government. Fuck your shameless "information war" which places the agendas of plutocrats and intelligence agencies above truth and honest discourse. Fuck your relentless propaganda campaign which smears anyone who remembers the lies they were told about Vietnam, Iraq and Libya as a "useful idiot" and arbitrarily labels any discussion of the very real phenomenon of false flag attacks as a "Kremlin talking point".

This is as fascinating as it is infuriating. By attacking literally anything which poses an obstacle to the loose alliance of western plutocrats and secretive government agencies, the social engineers who are fueling this Russia hysteria are actually closer than ever before to openly admitting that the west is truly ruled by those plutocrats and agencies. They are now this close to saying "Russia is our enemy because it stands in opposition to the corporatist Orwellian oligarchy which is your real government."

This is a really extraordinary time to be alive. The nationless power establishment which looked completely unshakeable a matter of months ago is now flipping out like a meth addict whose stash just got stolen and publicly overextending itself in an amazingly conspicuous way. The mechanics of western imperialism and the deceitful nature of the mass media propaganda machine which holds it all together have never been as exposed as they are today.

Keep pushing against the machine, clear-eyed rebels. Truth is winning. Truth will prevail. The bastards are about to fall.

" Fuck your brazen attempt to keep the British people from reclaiming what is being stolen from them by an increasingly corporatist neoliberal government."

It's the local elections in the UK tomorrow. So this will be a well timed smear aimed at the labour party.

Voting for the red team or the blue team is a complete and utter waste of time and only encourages the bastards.

We need to change the game, not the politicians!

I shall be spoiling my vote, if everyone did the same things would have to change. Perhaps peeps should do the same, it will certainly put a smile on your face.

I shall draw a cock on one side of the voting slip & "Terresa May was born a man" on the back.

Elo mate,good idea I like it! that should raise a few eyebrows.I certainly won't be voting for the bastards, it's a complete an utter waste of time and changes nothing.
Never before have "their" lies and propaganda been so blatant and obvious.More and more people are waking up,"they"are starting to lose the game......................

They must be in some serious panic mode internally, for this garbage to continually be recycled and regurgitated. They know they are losing!

Caitlin is,how can I describe the best,an informative entertainer!
I mean,besides I agree with every word,but couldn't stop laughing at "flipping out like a meth addict whose stash just got stolen" :-)

Got that point. Thats totally true

"I'm not sure which way it's going to go. I mean, there's enormous pressures to harmonize freedom of speech legislation and transparency legislation around the world -- within the E.U., between China and the United States. Which way is it going to go? It's hard to see. That's why it's a very interesting time to be in -- because with just a little bit of effort, we can shift it one way or the other." Julian Assange
Keep doing what you're doing Caitlin - we're closer to success than we realize

The efforts to try and get people to believe the narrative are getting more and more desperate. The majority of fellow Brits I talk to still seem to believe the "Russia did it / is behind everything" following years of successful propaganda against the country and Putin. I have noticed that quite a few are starting to see how blatant the media's attacks on Corbyn are for asking logical questions that fail to support the narrative.

If only I hadn't put that stupid disorganised witch Amber Rudd in charge of rigging the ballot, I wouldn't have had to go do a deal with those weird Irish Jesus-freaks the DUP. I'm not making the same mistake this time, and I'm leading up to releasing the pictures of Corbyn being Bernard Cribbins lovechild. That should fuck him up.... Oh I'm glad your on Steemit Theresa, could i ask you a quick question to confirm or deny my suspicions. Were you born a boy or a girl? Thank you.

It more and more looks like the US WANTS Europe to team up with Russia so they can wage ware on everyone. 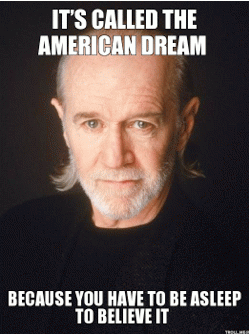 Love the meth simile and the fucking appropriate use of the word fuck.

Spread the intelligence and build the momentum of the movement! Full upvote for this one.

They might be exposed to those of wearing the They Live sunglasses but one has to wonder just how exposed they are to everyone else. Sure, it might be a higher number now than it was two years ago but I still don't see any mass uprisings on the horizon. What I see out on the streets is people going about their days.

My money is on no real change happening until the next economic collapse and even then, there's no guarantee that change will be for the better. Maybe they are so brazenly exposing themselves now because they know they own all the levers of power and cannot be stopped. The path has been chosen and the autopilot has been engaged. The status quo will be protected at all costs until there is no longer a status quo to protect.

That's the moment we all need to be on our guard because if there isn't enough of a fight from the people, what happens after the next systemic crash will be most undoubtedly worse. The reason we fight now is not because the system can be changed. It's to prepare for when the system collapses. It's important that people understand why the collapse is going to happen, so the ruling class who caused it at our expense can be ousted from power when it does. Otherwise, we'll just keep repeating the same cycle over and over again.

Keep pushing against the machine, clear-eyed rebels. Truth is winning. Truth will prevail. The bastards are about to fall.

Didn't have time to read the post, will come back later when I have a free minute. This upvote is simply for the post title :) Excellent use of a comma.

Russian Hooligans will attack innocent brittish football fans with gas at the FIFA 2018 world cup in Russia.
Just wait for the headlines.

they all fart in sync?

Observation one: LOVE the title, Caitlin! At this point, the gloves have to come completely off. The only way to fight this sort of gaslighting and manipulation is with cold, hard and blunt truth.

Though the supine corporate press in the UK really can't handle anything other than that which their MI5/6 handlers feed them. That and the fact that a lot of UK journos, as in the US, are actually on the payroll, let alone trying to save their "careers"

That being said, I wish you hadn't used the label "McCarthyite". The concept of "McCarthyism" was invented by the left, being used to discredit the efforts of anyone patriotic enough to try expoing the subtle yet pervasive communist/socialist/cultural marxist influences in western media, politics, entertainment and education.

Your writing is on point! (And the frustration is real...)