Just some food for thought... So, here I am, tooling around Facebook. Against my better judgement. I know better than to do that, especially during times like these when the country is in an uproar and people feel the way to get their points across is through argumentative banter, and politically charged memes that are meant to attack the other side's intelligence and get their point across. Because as we all know, minds are changed on Facebook. Now this brings me to one meme, in particular. 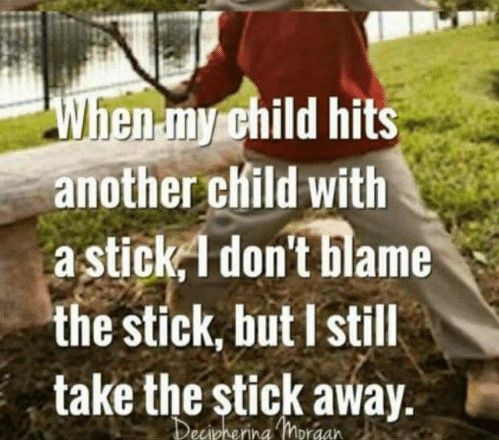 Now. I have some problems with this comparison. Firstly, is not the gun already taken away from the person that used it to harm others? Secondly, how is the real problem addressed? The real problem is your asshole child definitely has some anger issues. So, if you take the stick, what's to stop him from simply grabbing another stick and beating other children? What's to stop him from grabbing a rock, or a bat, or even just his fists to take out his aggression, which you have still not addressed, on other hapless, unsuspecting children?

Secondly, my problem with this apples vs. oranges comparison of your mean spirited kid going around knocking others out armed with whatever he can find, is this. In order for this comparison to be more accurate and relevant to the debate at hand, it would have to be phrased more like, "If my child hit another child with a stick, I would go around my neighborhood and collect all the sticks from all the children that were doing nothing wrong with their sticks because no child really needs a stick." Although, more accurate of a comparison, the crux of the problem has still not been reached. Personally, if my kid hit another kid with a stick, sure, I would take the stick away from her. I wouldn't go around knocking on doors, confiscating all sticks in my neighborhood. Find out why she needed to beat on another child. Was it self-defense? Did the other child call her a name? Or is she just a willy nilly psychopath that gets off on hurting other children? If anything but the first is the case, then I punish befitting her crime. If the latter is the case, I seperate her from other children while I attempt to get her some help. The sticks become the LEAST of the worries at that point.

Just remember people. Sticks are not the problem. Timothy McVeigh killed over a 160 people and injured over 600 more without a single "stick". We are looking for the quick and easy fix to this problem, and the quick and easy fix is NEVER the solution. You can't put a band aid on a compound fracture. We all want our children to be safe. But we have to look to better solutions to accomplish this. We need a permanent solution. Look deeper into the problem, and solve it at it's root.