Meet Dunya Mikhail, An Iraqi Poet Worth Knowing--Profundity With a Light Touch 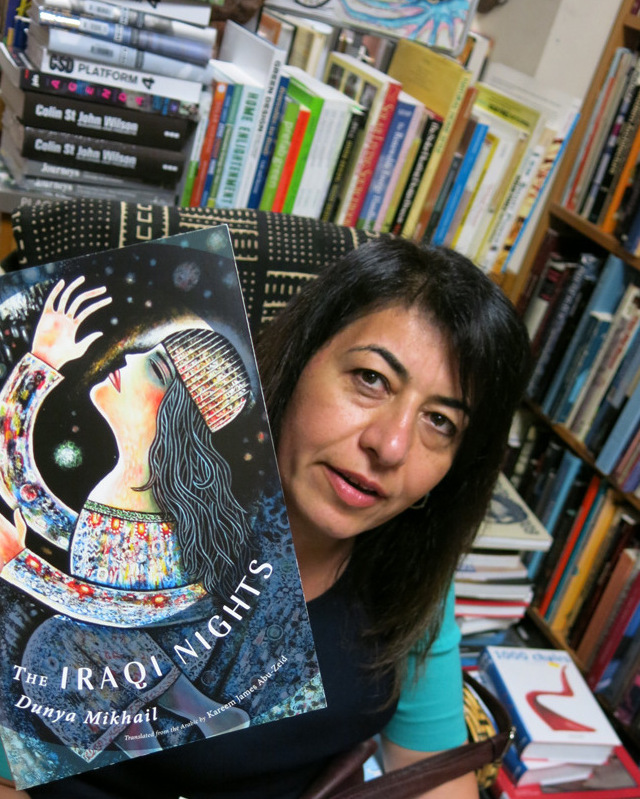 Dunya Mikhail is a powerful poet, deceptively simple in person and on the page. I was fortunate to meet her and encounter her soulful work, when I was invited to read with her at the San Francisco International Poetry Festival, some years ago, thanks to poet laureate Jack Hershman. Dunya and I did not share a stage; I read in smaller venues, she in the main hall, which she packed. She was the first, perhaps, only poet whose books sold out and quickly.

The war-ravaged poetry Dunya shared with us was, curiously, not heavy. Hers is a plain-spoken verse, that uses "easy" words to convey complex emotions: homelessness, hopelessness, identity, great suffering and endurance. In person, she is the picture of humility, standing unassumingly alongside her translator (even though she speaks fluent, accented English, she writes in Arabic). Occasionally, and good-naturedly, she would take over the translating duties herself, trying to find a better fit in her adopted language and home for her foreign pain. Always, self-deprecating and unexpectedly funny, silly even. She came across as a wise child and I'm happy to say that we soon became friends.

Below, are a few poems of hers, quietly devastating, surreal and important in these unfortunate times, when our fear of others often outweighs our compassion: I Was In A Hurry

Yesterday I lost a country.
I was in a hurry,
and didn't notice when it fell from me
like a broken branch from a forgetful tree.
Please, if anyone passes by
and stumbles across it,
perhaps in a suitcase
open to the sky,
or engraved on a rock
like a gaping wound,
or wrapped
in the blankets of emigrants,
or canceled
like a losing lottery ticket,
or helplessly forgotten
in Purgatory,
or rushing forward without a goal
like the questions of children,
or rising with the smoke of war,
or rolling in a helmet on the sand,
or stolen in Ali Baba's jar,
or disguised in the uniform of a policeman
who stirred up the prisoners
and fled,
or squatting in the mind of a woman
who tries to smile,
or scattered like the dreams
of new immigrants in America.
If anyone stumbles across it,
return it to me, please.
Please return it, sir.
Please return it, madam.
It is my country...
I was in a hurry
when I lost it yesterday.

Here's another, that should soften hardened hearts, who cannot see the humanity of those who must flee their homes, or fathom the great suffering that they are forced to escape: I work in a store for selling tears
in bottles of various sizes and shapes.
Crowded place, and no time
to bring handkerchiefs.
First in line is the woman
who comes every day
to buy these colorless drops.
For herself? For others?
Next, a newcomer.
He thought he would not leave his country
even if the mountain was removed from its place.
Next is a little boy with his grandmother.
They survived the flood, not exactly.
The woman at the end of the line
wants to return her bottle of tears.
She says it's not opened.
She thought she would need it
after the departure of her friend.
But she, instead,
kept going back and forth
between two parking spaces.
The sun left to the other half of the world.
Time to go home.
We are out of tears.

It's strange, for me, to call Dunya a "war poet" because she seems bigger than that, and she is. But, she addresses the collective moral failure that is war, specifically the Iraqi invasion (it seems odd to call it a war, when it was one-sided). Who's to say, maybe, much of the world-mess we're living in, now, is a result of this unjust and monstrous act of violence, murdering hundreds of thousands of innocent Iraqi civilians (possibly a million, figures vary). Maybe, too, to some extent, we are all implicated in this historical tragedy which has changed the way we live, now, and done irreparable, unimaginable damage. The hope is that we have learned something and do not repeat this madness, again, in the less--than-sane Age of Trump.

Dunya's poem, below, The War Works Hard drips with hallucinatory sarcasm, bitter irony, and should break your heart wide open... You can listen to Dunya read her stirring, urgent words on NPR, here:

"Poet Dunya Mikhail fled her homeland, Iraq, a few years after the first Gulf War. She had been questioned by Saddam Hussein's government, and state media had labeled her writing and poetry subversive."

(Photo of Dunya Mikhail by Cary Loren; others from Pixabay: Children of War by janeb13, Weeping Sculpture by joseph_Berardi )

Hey @yahialababidi, I am @insteem, the News on Steem. I have just upvoted you and resteemed your story to ~8000 followers, courtesy of @lilyraabe.

Insteem, the News on Steem
Insteem is a new project on steem to support independent journalists and reward news creators.

Want to know more or support/join us? Find us on Discord https://discord.gg/TPjXr6Z

Thank you for sharing this. Is she coming to Steem? "I was in a hurry" really spoke to me, although perhaps in a different way. I feel like I lost my country some years ago as well. As I became more and more aware of the consequences of US tax dollars "at work" around the globe (what % of a cruise missile have I funded with my dutiful payments?) the cloak of national identity no longer felt like a good fit. I do not like drawing it around me. Maybe I cast off my country, instead of losing it - I believe I know exactly where it is. Unfortunately it is in the same place where I left it those many years ago.

I think she might be allergic to social media, in general, but would make a great addition, here, for sure... I know what you mean, brother, about casting off one's country. I did something of the sort as well (with Egypt) but hope against hope that we find our way, sooner than later, battling for our soul as we all seem to be at this moment...

There's a very short poem, that echoes your thoughtful comment, and which I find myself frequently returning to:

Beloved homeland,
how did we let you steer us
so far from home?

Thank you for this intro, Yahia. I've been and still am too sad or maybe too angry for words, but I do read you....And this, these poems, are somehow all the more painful for their small words, their lighthearted offhandedness.... Like having a conversation with a child who'd been forced to grow up too fast.

Inna, I missed you and have been wondering how you’ve been, off Steemit! I’m so glad you read Dunya’s poetry and enjoyed it. The way she ‘tells the truth slant’ makes it more likely, somehow, to be heard...

Yes, innocence is lost, ours, when we go to war.

Be well, my friend, and take good care of you 🙏🏼

What a beautiful post. I love that you are sharing this woman’s story and work...I was inspired by every word I read. Thank you.

Good to hear from you, again, @lilyraabe; Dunya is a major artist/activist (artivist) right up our alley! Glad you enjoyed this piece & hope you might consider sharing her valuable work, with those unfamiliar with it :)

It’s amazing, already resteemed, and seeing what else. So rad.

"I was in a hurry" and "tears" spoke deeply to my heart. It is troubling the lack of compassion the current administration has towards refugees. I loved how she skillfully weaved her words for everyone to understand - even a child, the pain of losing one's home and in her case - her homeland. No one should ever have to endure such tragedy. She is indeed a powerful sacred warrior! Thank you for sharing her poetry, may it serve to soften hearts of stone and raise of awareness so that we can come together and put an end to this insanity in our lifetime.

Yes, ‘even a child can understand the pain of losing one's home(land)’. In which case, we must try as a people to access our inner child, in order to recover our compassion.

Thanks, for yours, Blanca 🙏🏼

I resteemed this post on my wall, to help spread her poetry with others. Many blessings to you Yahia ❤

I really appreciate it. Thanks, again, and stay blessed ✨