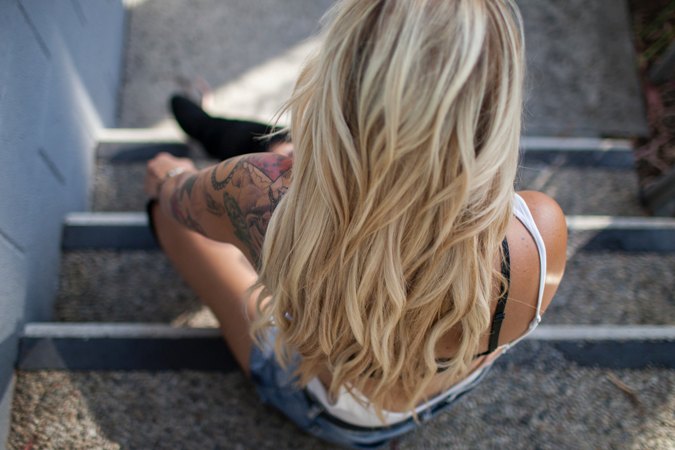 She’s in her own world

With her head down

And her shades of cool

All the other girls would be just like her

She’s got a boyfriend and some girlfriends

But she’s alone in this world

Walks like a killer leaves the scene of a crime

Can’t tell if inside she is laughing or crying

She drinks and smokes as if her looks will never fade

And if they did she wouldn’t care anyway

She’s seen the city that she loves decay

A shining artifact of better days


Hipsters (And Why I Hate Them)

You’d think every one of them was a Michelangelo by the way they grinned.

And glue them by their beards to a tacky mural

And stick their earphones through their eardrums

Gas them to the sound of a black chick taking it up the pooper.

I want to bomb the next Mumford and Sons concert

And put fishnet stockings on every hipster guy

And a beard on every hipster chick

Because in my mind that’s how I see them.

I want to drop absinthe into their eyes and see what happens,

Shit – I want to drop absinthe into MY eyes and see what happens.

But most of all, I want the ultimate revenge –

I want to fuck their mothers.

What are all these strollers doing on the street?

Why is there a puppy pissing on my feet?

What are these beautiful chicks doing with dog shit in their hands?

Why the yuppie scum allowed to live here in our land?

I don’t know why ya’ll talk so loud, its makes it hard to think

If I see you when you’re jogging, I’m gonna trip you everytime

Your iPhone won’t save you, it’s yuppie killing time

I do this not for you or me, but for the children of this world

Just think of what a better place, your author will make for us

And thank him, not through love and praise, for your donations, are enough

There was that one from the bar with the hair on her right nipple who I only saw that once.

There was the one I worked with who I never got very far with, and who was so Brooklyn.

There was the one I lost my virginity to. That was nice of her. My runaround Sue.

There was that older woman who had a boyfriend and lived around the corner from the bar.

There was that one I finger fucked on the pullout futon of my friend's living room.

There was that one who used me to get back at her ex.

There was the speedfreak. The dope head. The private little red haired pothead.

The soccer player. The librarian. The Mexican waitress with a kid.

Lots of ones named 'Kelly' for whatever reason.

The daughter of the rich Texan with rich person's insecurities.

The one I loved then hated. The one who was completely shaven.

The one who couldn't open up without cocaine.

There was that one who was so drunk she couldn't possibly remember a thing.

There was that one who kept insisting on buttplay despite my each and every objection.

There was that beauty at nineteen who had lost it by twenty-one.

There was my boss with the overfed cat.

There was the go go dancer with the worst case of white person's rhythm.

There was the country bumpkin with a great figure.

There was the gorgeous teenager who I never want to know how old she really was.