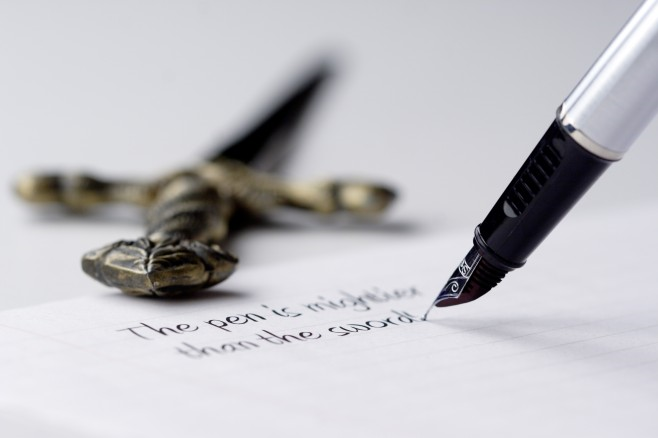 Image Source
The pen is mightier than the sword they say
And yet blood turns ears better and quicker than ink
One may be given the hue of another to preserve the value of think
But in contrast, rather ruins the power of the other in the eyes of day
A chest full of treasures carrying nothing but a pump and a debt to pay
A tube full of molten metal imbedded with the power of time and no link
The future of a bright wordless man coupled with the past of unspoken winks
The present of an outspoken outlaw with gift of the attention of hay Image Source
As the frost thickens on their eyes, nothing can be done from the outside
Lost in the sandstorm, the rain pours hard on the chosen many or so
In the frigid regions of thought, the unbearable hear penetrating rigid lava
Though the hardest rock breaks given enough, the hardened heart has no side
Though the mind is nothing but tissue, nothing more stubborn than fissures go
Ink may be thicker than water but impatience to defrost faster spills blood over

The conqueror will tell you the pen is mightier than the sword so you hold up a pen when he swings his sword.

At least you don't show up to that fight empty handed? 😂 Thanks for the feedback and stopping by. It's lovely to hear from you

Good poem. The rhyme is is good and kind of different. I wonder at your fondness for long lines of poetry