The Horrible Inspiration Behind One of Picasso's Great Works

Painted in the wake of a 1937 fascist bombing, "Guernica" has grown to stand for war atrocities experienced all over the world.

Working at great speed in the wake of the bombing at Guernica, Picasso filled a vast canvas with what would become the defining image of the horror of war.

Pablo Picasso had been searching for three months for something to paint in April 1937. Living in Paris, the Spanish artist had been given a commission to produce a mural for the Spanish Pavilion of the 1937 Paris World’s Fair. Turmoil had disrupted his process, both in his private life and in the civil war raging in Spain. The horror of this war would give Picasso his inspiration to paint a bold, unflinching vision of the devastation and savagery of modern warfare on everyday people. Picasso’s work, “Guernica,” is one of the 20th century’s greatest works of art and a strong statement against war.

WAR CRIME
In July 1936 the authoritarian Spanish general Francisco Franco had launched a semi-successful coup against Spain’s democratic republic; a swath of Spain fell under Franco’s control, while the other half was retained by the republic. As global tensions soared on the eve of World War II, Spain’s bitter civil war rapidly internationalized: The republic received aid and arms from the Soviet Union, while Franco was armed by fascist Germany and Italy.

April 26, 1937, was a Monday, a market day in Guernica. That afternoon, German and Italian bombers dropped 550-pound explosives to crush buildings so that fire would spread more quickly. They were followed by waves of planes dropping incendiaries that burned at 2500°C. By the evening most buildings in Guernica were uninhabitable. Although the death toll, at first thought to be thousands, was later revised down to between 200 and 300, it sent a terrifying message to the world: The fascist powers were prepared to unleash the new weapon from the sky on civilians, the prelude to the devastating carpet-bombing of European cities during the Second World War.

On April 26, 1937, crew members on the British battleship H.M.S. Hood watched warplanes assembling over the coast of northern Spain. What they saw was a mixed formation of German and Italian bombers on a mission to bomb the small Basque city of Guernica. The attack began around 4:30 p.m. and lasted for three hours as high explosives and incendiaries laid waste to the undefended town.

As soon as news of the attack became known, war correspondent George Lowther Steer of the Times of London raced to Guernica and filed a report to alert the world: “At 2 a.m. today when I visited the town, the whole of it was a horrible sight, flaming from end to end.”

Steer also identified that the raid was not carried out for military purposes but with the specific aim of terrorizing civilians: “A factory producing war material lay outside the town and was untouched. So were two barracks some distance from the town.” On May 1, 1937, Picasso made his first sketches. The bull and the horse were present in early drafts, along with the fallen soldier and the woman with a lamp. Picasso had, in fact, used several of these elements in a previous work, a 1935 engraving of a minotaur.
ORONOZ/ALBUM. © SUCESIÓN PABLO PICASSO. VEGAP, MADRID, 2018 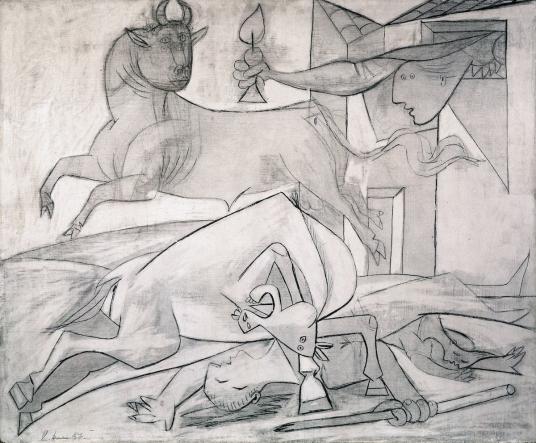 Although the central figures remained constant, Picasso made many revisions to the work. Its austere palette of black, white, and gray is said to have been inspired by the grainy quality of newsprint, reflecting that the Spanish Civil War was one of the first conflicts intensively covered by the media.
ORONOZ/ALBUM. © SUCESIÓN PABLO PICASSO. VEGAP, MADRID, 2018
After just five weeks, the vast, mural-size canvas was complete. There is a story (perhaps apocryphal) that a Nazi officer later showed Picasso a photo of the picture, and asked him, “Did you do this?” Picasso is said to have replied: “No, you did.”
DPA/ALBUM. © SUCESIÓN PABLO PICASSO. VEGAP, MADRID, 2018 After just five weeks, the vast, mural-size canvas was complete. There is a story (perhaps apocryphal) that a Nazi officer later showed Picasso a photo of the picture, and asked him, “Did you do this?” Picasso is said to have replied: “No, you did.”
DPA/ALBUM. © SUCESIÓN PABLO PICASSO. VEGAP, MADRID, 2018

The day after the attack, Pablo Picasso was sitting in the Café de Flore, Paris, and read of the atrocity in the newspaper. With the appalling news from Guernica, Picasso knew he had his theme at last.

Working at great speed, he filled a vast canvas with what would become the defining image of the horror of war. From its unveiling at the World’s Fair, where it caused a sensation, the painting toured the world. It ended up in the United States where it would remain for the next 42 years. Housed in the Museum of Modern Art in New York City, it hugely influenced a generation of postwar American artists. Jackson Pollock, the great abstract artist, went to the museum every day just to gaze at it. Once, overhearing a fellow gallery visitor express an unflattering opinion about the canvas, Pollock invited the man outside where he suggested they fight it out.

Picasso had always said that he would not allow the picture to travel to his homeland until Spain was a republic. General Franco died in 1975—two years after Picasso—and Spain made the transition to democracy as a constitutional monarchy. Even though this meant that Spain was not the republic that Picasso had dreamed of, “Guernica” was allowed to return in 1981 and was shown at the Prado Museum in Madrid. The painting’s power to provoke had not diminished over the years. Because the passions of the Spanish Civil War had not faded, “Guernica” was displayed behind bomb- and bulletproof glass. In 1992 “Guernica” made its last journey, to the nearby Reina Sofía Museum in Madrid, where it is now visited by an average of 11,000 people every day. 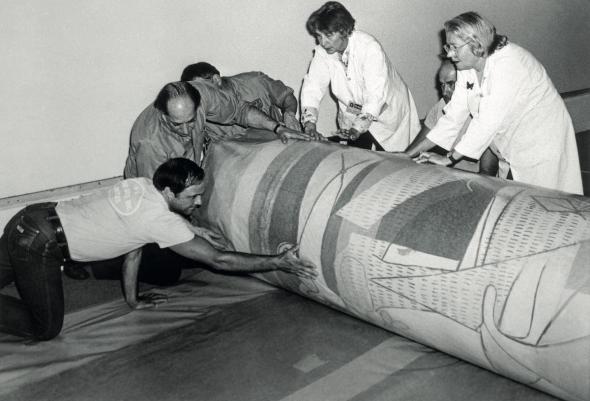 Workers at the Museum of Modern Art roll up "Guernica" before sending it to Spain in September 1981.
BETTMANN/GETTY IMAGES

Today, as warfare still threatens peaceful civilians across the globe, “Guernica’s” depiction of terror, agony, and loss remains the strongest anti-war artwork of the ages. Picasso was cagey about explaining his works, and “Guernica” was no exception: “If you give a meaning to certain things in my paintings it may be very true, but it is not my idea to give this meaning. What ideas and conclusions you have got I obtained too, but instinctively, unconsciously. I make the painting for the painting. I paint the objects for what they are.”

WHERE DID PABLO PICASSO'S GENIUS COME FROM? Pablo Picasso is considered one of the most influential artists of the 20th century, and his work continues to be studied for its meaning and celebrated for its creativity. Follow the path of Picasso’s life in this brief animated video.

Over the years, artists and critics have marveled at the painting’s powerful imagery and attempted to explain it. Picasso’s use of a bull, a traditional Spanish symbol, is ambiguous as it could represent either Spanish victims or Spanish brutality. The figure of the wailing mother mourning her dead child may refer to Michelangelo’s “Pietà” in which the Virgin Mary grieves her dead son. The gored horse is one of the central figures in the painting; its wounded body blindly tramples the broken body of a soldier on the ground. The one hopeful figure is the female form emerging from a window: She holds a lamp and shines a light on the devastation, perhaps so the world can see what happened here.

For critic Herbert Read, “Guernica” was “the modern Calvary, the agony in the bomb-shattered ruins of human tenderness and frailty.” Australian critic Robert Hughes placed it within the Western art tradition as “the last great history painting. It was also the last modern painting of major importance that took its subject from politics with the intention of changing the way large numbers of people thought and felt about power.”