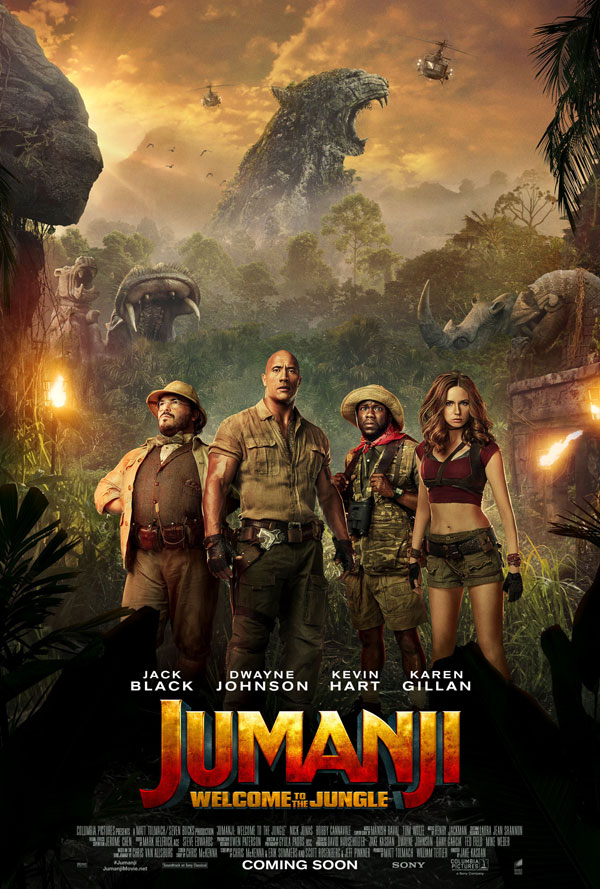 This is sort of a sequel to Jumanji (1995) and I didn't really have any expectations for this film. But I got exactly what I thought I would get + a little more.

This movie is about a group of kids who get stuck inside a videogame version of Jumanji, and also as different people.

GOOD. The characters are really good. The actors manage to some extent to embody the kid they're representing, especially Jack Black, who outdid the others. I totally believed that he was the girl he was portraying. The comedy and writing in general was actually good and works well with the film. It manages to avoid some clichés and I enjoyed myself more than I thought I would. The pacing and structure is also surprisingly good. It subverted my expectations a few times.

BAD. The absence of tension. Not to say there weren't any, but there was not a lot. I was never afraid for any of the characters and the story is predictable + super generic. The villain was straight up laughable and probably one of the most one-dimensional villains I have ever seen. The themes are spoon fed to you through the paper-thin parallels of the kids and the characters they play in the game. They are placed in the characters that are opposite to them and they learn through that. There's nothing wrong with that necessarily, but it's cheap. Because the story takes place inside a video game, they can get away with many things in the plot - which is kind of annyoning. The writers made it easy for themselves - but they also did a decent job at making an entertaining movie.

To sum it up, this is not a bad film. What works are the main characters and their relationships with each other. Other than some shallow and predictable plot, it's a fun ride for the family and an easy digestible movie.

Comment and let me know what you guys felt about the movie! Pleasant surprise in multiplex this year with clever casting and lively action sequences.