scottdphoto (73)in #photography • 4 years ago

Time for a splash of colour, something that you don’t regularly expect from the emerald seas of the Pacific Northwest. Corals and soft corals are much more associated with tropical waters. This colonial soft coral is also known as the sea strawberry. It has thick, soft, red-pink lobes, and individual polyps within the colony have eight tentacles. These corals appear quite plump and fluffy, however when the colony is disturbed, it to become much smaller, shrunken, and brain-like. Colonies can reach heights of 30 cm, and lengths between 5 cm and 15 cm. 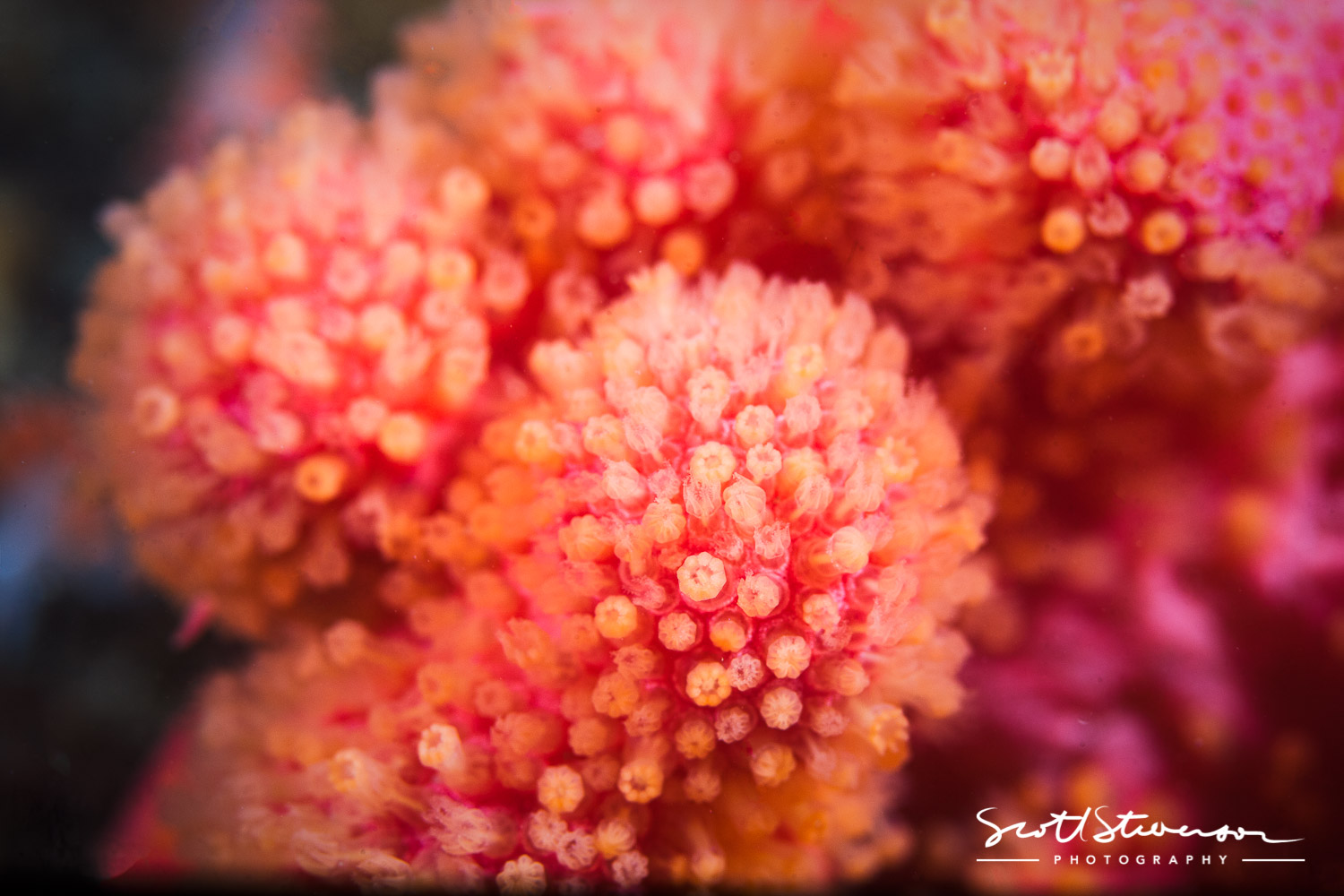 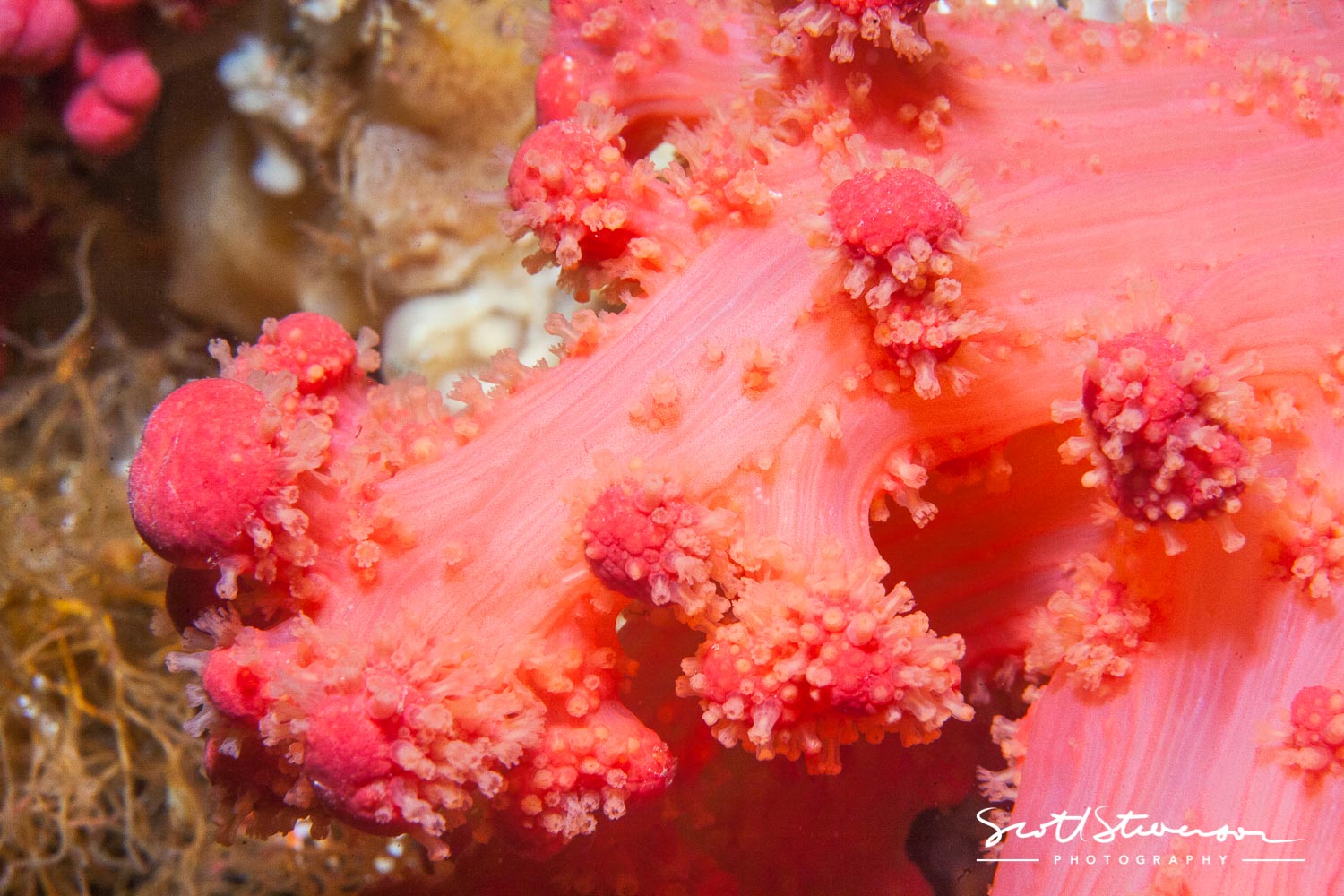 Pink soft corals have a widespread distribution in the northern Pacific ocean, and can be found in the intertidal and subtidal to depths of 36 meters or more, and reaching depths as far as 2000 meters. Colonies typically grow on rocks or on fragments of shells in high-current areas. Its eastern Pacific range extends from the Bering Sea to California. Along the coastal areas of British Columbia on of the best places to dive and photography these colonies is north of Port Hardy in Browning Pass. Large aggregations of this species are often referred to as Strawberry Grounds, and are important habitats for many marine species, but specifically basket stars. You will find these sea stars are often nestled among the soft corals. 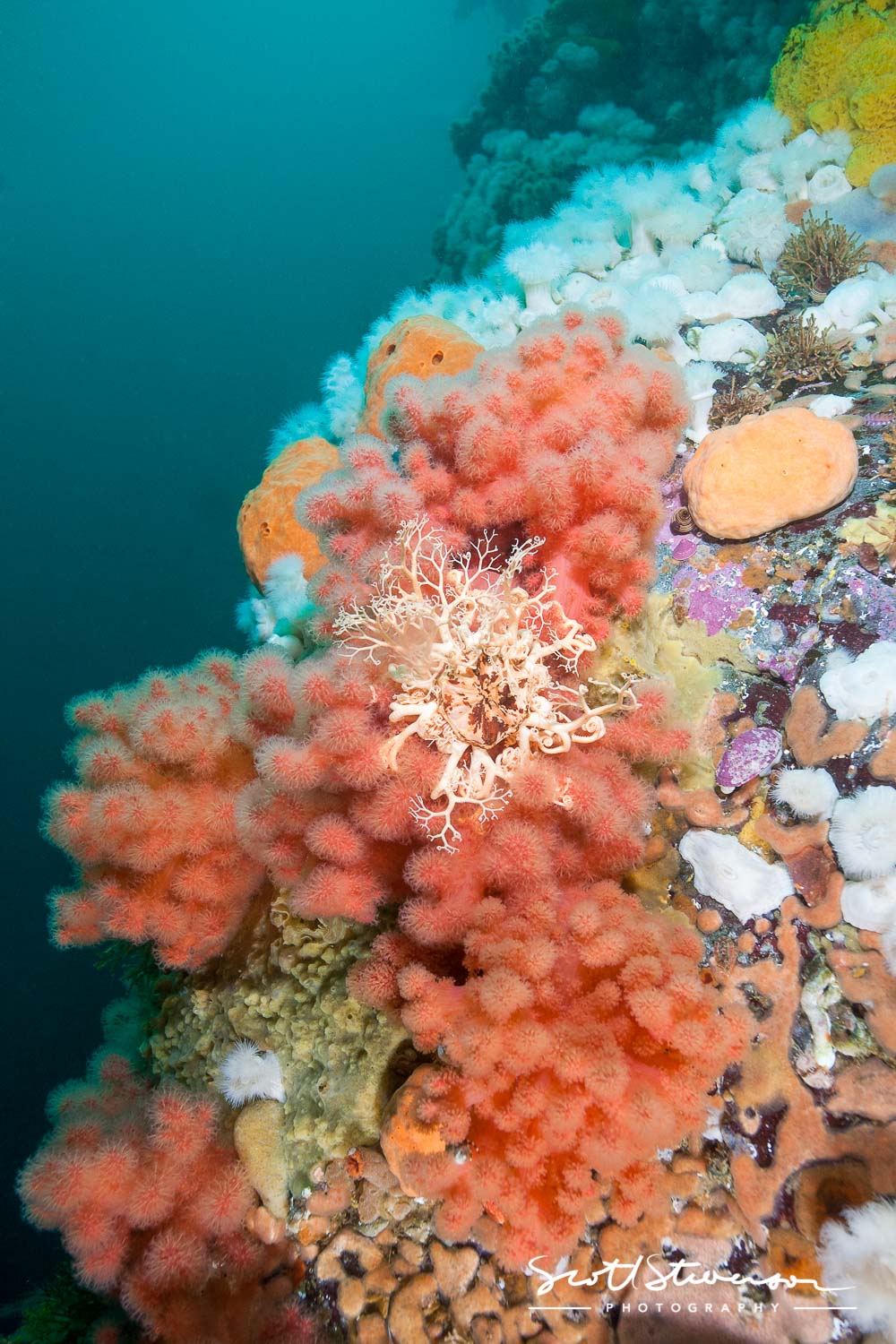 Photographing the walls of Browning Pass that are densely covered by these corals and sponges takes skill and the proper equipment. Go with a seasoned guide and boat operator. Dive at slack tide to give you the best opportunity to get amazing images. Most importantly dive these areas as many times as you can that way you can shoot both wide angle and macro. That way you can maximize your portfolio.

For more stories and images - http://www.scottstevensonphotography.ca/

As a scuba diver from the south east coast of Florida, I can agree that coral and colors are more popular in the warm waters of the Atlantic. These ecosystems are home to millions of marine wildlife and truly are breathtaking!

Thank you, glad to see another scuba diver in the community. Thanks for checking out my post.

How is the health of these pacific northwest reefs, are they seeing the bleaching events that other reefs are facing?

Due to the colder waters here in the Pacific Northwest, we don't see any coral bleaching. We only have a couple of species of hard corals that live here and they generally only found in deeper waters. Overall the waters here are fairly healthy however we still have a significant amount of pollution, discarded fishing nets and plastics here.

Are there any invasive species like lionfish or crown-of-thorns?

You could shoot the polyps! I thought they'd be bigger. The yellow ones look like sponges and I can see white anemones too <3

Congratulations, good post I love,
I love corals, they are very colorful and beautiful

Some of the most nutrient-rich waters are located off the Pacific North West coat lines.

Beautiful underwater shots. I hope I get to vosit this place someday :)

Very good post it is recalled my memory of last year tour to Corel Island at Andhaman.

Wow just amazing man I really like you the pictures

that is so amazing! With its fancy colors they are eye candy and looks real one too! Great underwater shots. I had fun reading and looking to your photos! Have a good one. Cheers! :)

So much beauty in these pictures.
Corals are so colorful.

Congratulations @scottdphoto, this post is the tenth most rewarded post (based on pending payouts) in the last 12 hours written by a Superuser account holder (accounts that hold between 1 and 10 Mega Vests). The total number of posts by Superuser account holders during this period was 1631 and the total pending payments to posts in this category was $19011.20. To see the full list of highest paid posts across all accounts categories, click here.

when you start diving, the entire muscle your body will fight the flow of water weight. expert fitness divers usually not aware that the activities they do underwater actually considered physical activity enough berat.pasalnya, while in the water, movement and the burden of the body's as if feels lighter. in fact, that occur in fact is divers using muscle groups main body to encourage them move against the resistance of water while browsing lautan.selain because of natural resources under the sea so amazing and unmatched, very beautiful, you can two: sports and enjoy the nature.

so cool! love the close up shots :)