My paddle with the whale

ourdailyboard (72)in #photography • 4 years ago

.
.
This is the story of how I found myself Stand Up Paddle boarding with a whale.
.
. 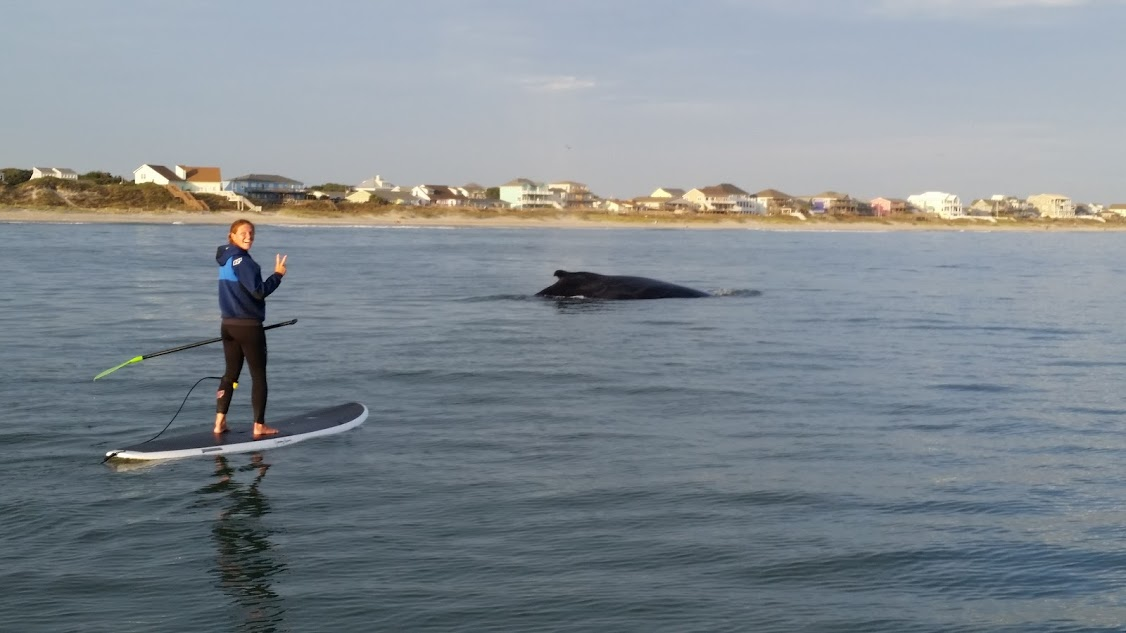 My boyfriend and I lived a 15 mile drive from the beach and were planning on SUP surfing if we could manage to find a place where the waves were breaking. Picture a typical day in the fall in North Carolina with air temps in the 60s (Fahrenheit) and a refreshing stillness and freshness to the outside air that draws you to the ocean, imagining the possibility of a clean wave to ride.

The coastline of North Carolina consists of barrier islands termed "The Outer Banks" protecting the mainland from the powerful ocean elements. We lived on the mainland side of the southern outerbanks, and must cross a bridge to make it to the beach and check the surf. While there is a certain element of predictability with modern forecasting and live cams available online, it is sometimes difficult to know if there are going to be waves. You truly must "go to know", but it helps that during the fall and winter season you are permitted to drive 4x4 vehicles on the beach allowing you to find the best break. Plus, who doesn't love the thought of driving their truck to the beach for a beach day?! So, we loaded the truck with our boards, paddles, and wetsuits, but when we arrived the ocean was like a mirror with not a ripple or a chance of a wave to ride. We hung out for a bit, then made our way toward the bridge to the mainland. I distinctly remember the feeling at the foot of the bridge, something was telling me not to leave, but to turn around and go for a paddle anyway

So we turned around, and immediately upon crossing over from asphalt to sand we saw a woman pointing out to sea and thought we heard her say "whale" to the person next to her. Moments later, we saw it too.
Naturally, at this point we decided this would be a lovely day to go for a paddle!!! 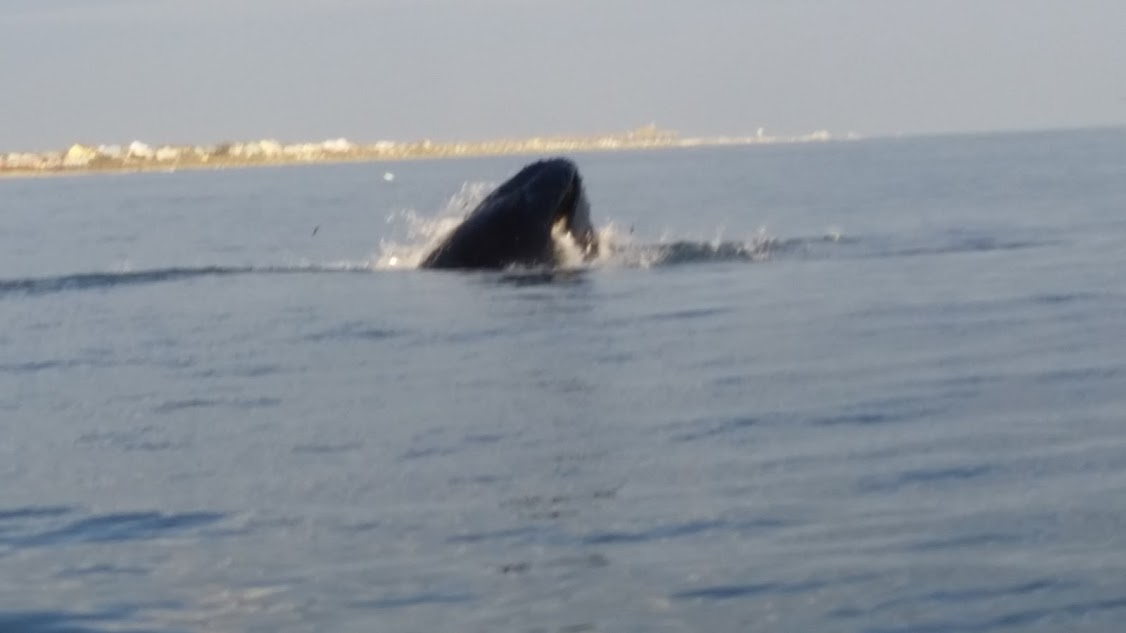 We positioned ourselves several hundred yards ahead in the direction the whale was traveling. We watched as the whale came closer and closer and as it did my heart began beating much faster, my skin was hot, and my knees were weak. I was both excited and completely terrified.

This encounter is, after all, of the highest possible magnitude. Humpback whales are up to 10x longer than humans and more than 600x heavier. The humpback whale's heart alone is 3 times the size of the human body. The whale approached.
It was surrounded by dolphins and was surfacing frequently. As it came closer it was clear that the group was feeding on large schools of small fish. The scent in the air was unforgettably fishy and there was a oily film on the water surface. Reflecting on this experience, I have a wholly new appreciation for the expression "something smells a little fishy around here".

The whale surfaced directly next to my board and my small little SELF and exhaled sharply, shooting a spout up that covered me in a magical mist.

I DON'T THINK I HAVE EVER FELT SO ALIVE 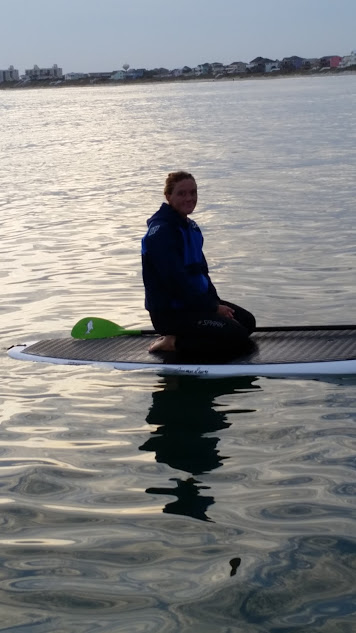 We paddled with the group for a while watching them surface just ahead. The dolphins were jumping fully out of the water at times, and the whale would sometimes show its tail. I remember thinking I could have done this forever. I was so present. So full.

And then the whale surfaced with it's mouth wide open, it's throat spreading out wide with the incredible volume of water. I could clearly see the hundreds of small fish darting away from it's massive mouth, and then I looked into the whale's eye.
Of course, I convinced myself it was looking right at me.
Of course, I felt we had a moment of connection.
I like to believe we did. Once we all got to the pier the word had spread and there were hundreds of people photographing. That was a big day for the whale on social media. Just imagine all the likes and shares. By use of social media I was able to connect with a woman who had taken a photo of us. 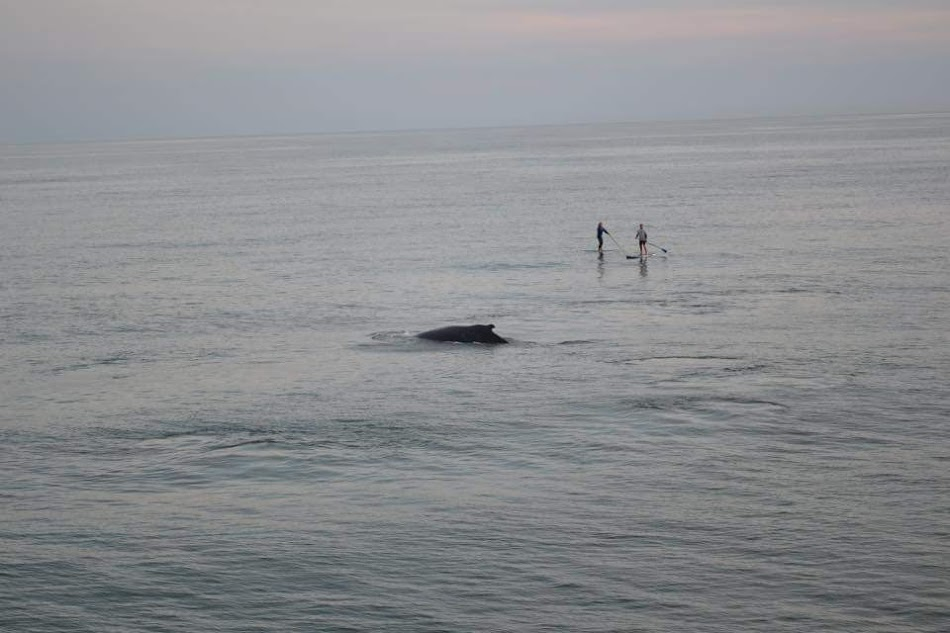 a photo of us, and the whale

After this close encounter I began researching whale behavior and habits. I learned of a surface behavior termed "spyhopping" where the whale will raise its head and eyes above the water surface with it's body positioned vertically and it will tread water using it's pectoral fins. It is commonly believed this behavior is used to "spy" on the world above. This is so cool and scary at the same time! How often can u have these emotions together...whoah im jealous haha...and that truck on the beach, is so hot! Haha it must have been very memorBle for u guys💕🌺🤓

It was too good not to...thanks for sharing💕☺

Oh wow! Awesome photos and must have been such a mixed feeling for you during your encounter with the mammal (adrenaline rush for sure!!!)... but looking back, it must have felt unbelievably awesome to have paddled so closely to it! What a great experience! Thanks for sharing your experience and photos.

I am glad you enjoyed the photos! It would only be fair to give credit where it is due to the photographer Michael. It was a last minute decision to bring the phone along for pictures, and I know that if I were holding the camera it likely would have fallen into the ocean. I was trembling with fear the entire time.
Thanks for reading!

WoW its cool! But sometimes its dangerous to swim near the whales, where I live recently a boat with fishermen was crashed by a whale and 1 person was killed
http://www.extra.ec/actualidad/cronicaroja-sucesos-accidente-santaelena-AI1486570

Yes I would agree it is dangerous to get close to a wild animal of that size,... especially when it is feeding!
Thanks for reading:)

I would die from fear if I met. you are amazing, he is a giant of at least 5000 pounds, I really appreciated.

thank you for reading. it was a thrill for sure.

Congratulations @ourdailyboard, this post is the ninth most rewarded post (based on pending payouts) in the last 12 hours written by a Dust account holder (accounts that hold between 0 and 0.01 Mega Vests). The total number of posts by Dust account holders during this period was 8626 and the total pending payments to posts in this category was $3219.80. To see the full list of highest paid posts across all accounts categories, click here.

Wow that would be very intense, amazing. That would be a serious rush, for real. Great post .

yes. it. sure. was. thanks for reading!!

Wow, nice photography.
But I am really Astonished to see the whale.
Great you are.