nomansanny (29)in #photography • 3 years ago 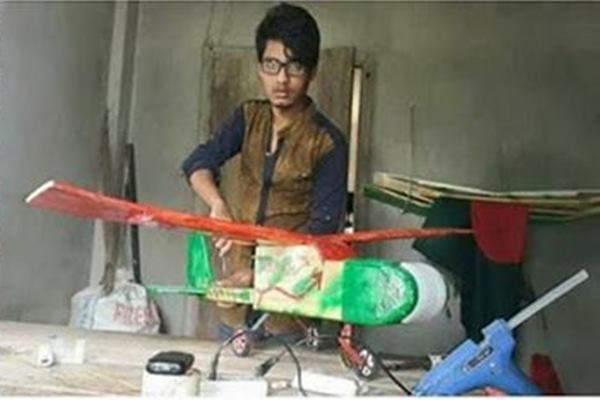 The power of invincible desire is possible to do anything. It proved that Mohammadpur of Lotha Para village ward No. 2 of Puichhari Union of Banskhali upazila of Chittagong. Asir was born. His father's name was Mohammad Shahab Uddin. Mohammad Asir Banshkhali Alawal Government College Eleven First Year students.

From his childhood, his dream will fly and fly in the air. In the meantime, for one hour, in the exchange of hard work, the aircraft will fly in the air by controlling the control of the remote control. The video flying in the sky has already been viral on the Internet

This scene created curiosity for many people in the area. The various social media and its aviation footage on YouTube have responded to the widespread response.

Asi was curious about the idea of ​​flying aircraft in the air from an early age. Think of that job. Since 2015, it has been working efficiently.

Finally, after a long 3-year study, at the end of December, 2017, a small airplane was successfully able to fly in the sky.

Asiad said about this, since the year 2015, we have created a small piece of electronic components through the collection of various abandoned toys. The aircraft has failed to produce almost 30 times since 2015.

Eventually, in December of 017, the dream of flying in the air was fulfilled. The aircraft, which was discovered in two to three years' pursuit, weighed 800 grams. The fan's fan has been made with a cockshit. To make the whole body of the body, the necessary materials are collected from a shop in Dhaka. In addition to the study, we spent the cost of the necessary parts of the air by saving the cost of hand.

Assiar said about the air controller, it is actually the drone controller. These controllers can be used to run drones, aircraft, cars etc. I used it for air control only.

Regarding the idea of ​​making the aircraft, Assi said, "I used to know how to add an airplane and how to add it, I knew working through the internet. Everything else except the remote controller was able to discover the small plane. My goal is now the same, today we created the aircraft with 33 grams of weight. I am trying to build bigger aircraft in the future.

Asir said, in the future, I will make the aircraft with a weight of 5/6 kilograms. The aircraft will be able to fly 60-70 kg in the sky. It requires a lot of money to make it. So I have stopped working now. But I'm going to continue research.