My new tank is complete now. I chose Glo-Fish for the school. Glo-Fish are controversial; because they were originally genetically modified with jellyfish DNA to make them glow. I love how they look in the tank and interact with the other fish. These are Skirt Tetra's, modified with jellyfish DNA. I guess they can still breed and will make babies that glow, passing on the jellyfish gene. 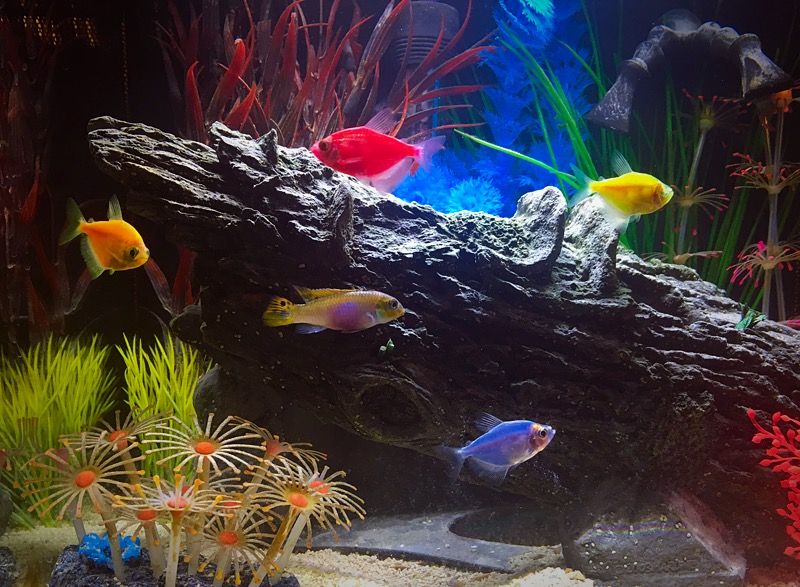 Catnip loves them. Here she is surrounded by her glowy friends! Occasionally, she chases them and they school up. They also have a hierarchy in the school. The green one has only one eye left and is the Alpha of the school. (Catnip is the tank Alpha). I imagine the green one earned its battle wound. The pecking order is then Red, Blue, then Orange.

There is a second controversy with Glo-Fish. There is a huge patent or intellectual property fight over the modified fish. The company that holds the patent will file litigation against people breeding them and selling them outside the patent.

Despite the controversy, I chose these fish because they glow under blue and purple led lights and are great for a display tank with other fish. If you get Glo-Fish, then it is important to keep them in a home aquarium. They would likely cause havoc to our environment if released into any of our bodies of water. I hope you all enjoyed this post and perhaps learned a thing or two.

Sneaky Ninja Attack! You have been defended with a 0.78% vote... I was summoned by @jrandolph! I have done their bidding and now I will vanish...Whoosh