traditional herald of Norooz.
He oversees celebrations for the new year perhaps as a remnant of the ancient Zoroastrian fire-keeper.
His face is painted black (black is an ancient Persian symbol of good luck) and wears a red costume.
Then he sings and dances through the streets with tambourines and trumpets spreading good cheer and heralds the coming of the New Year. " 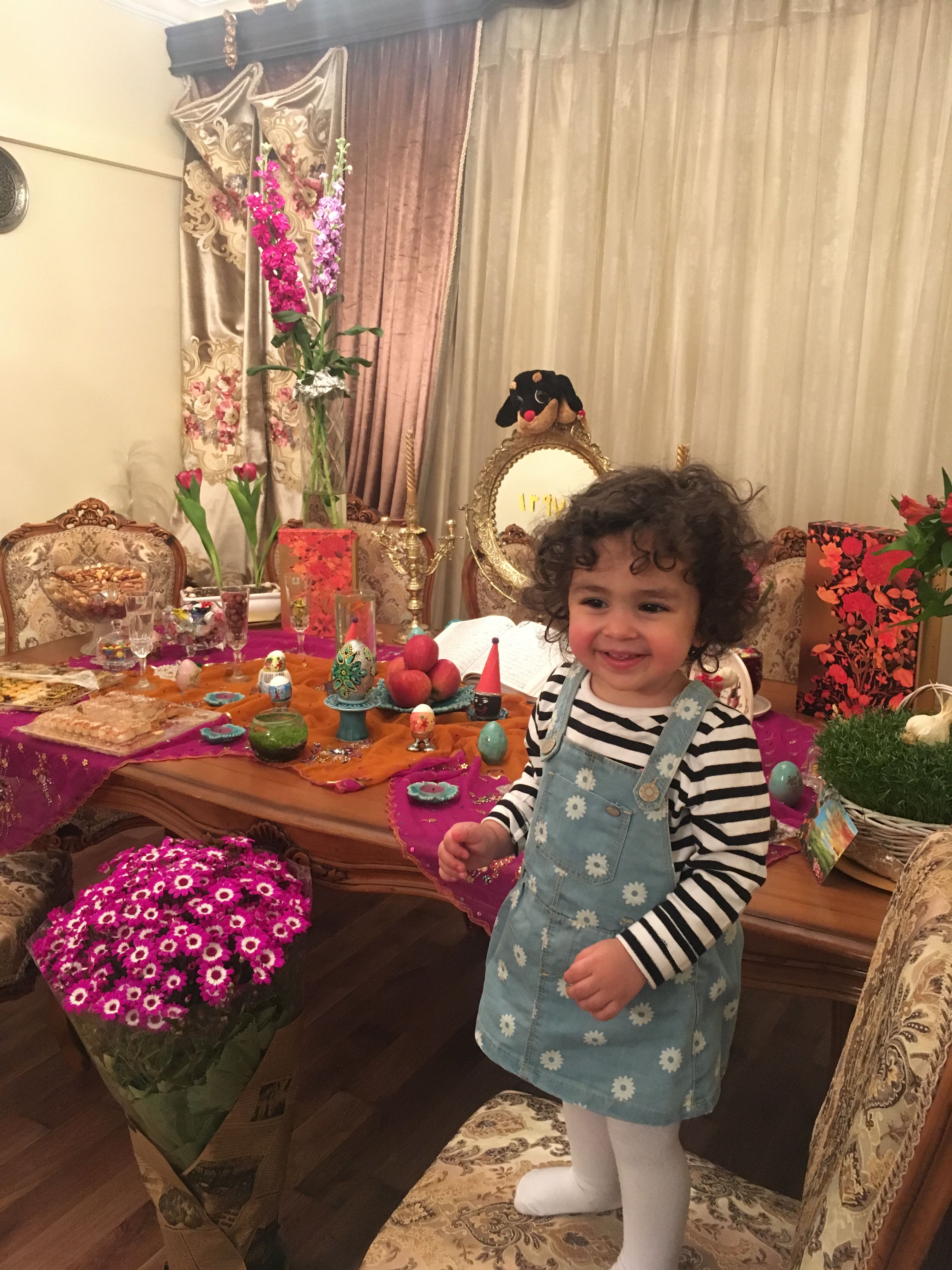 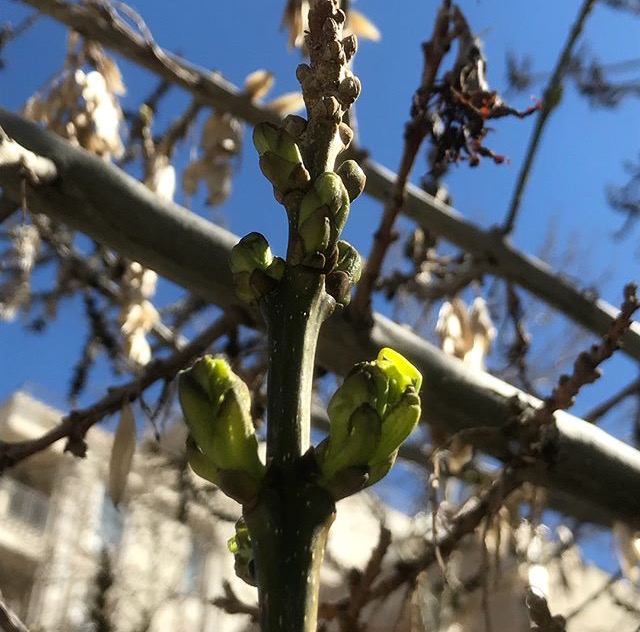 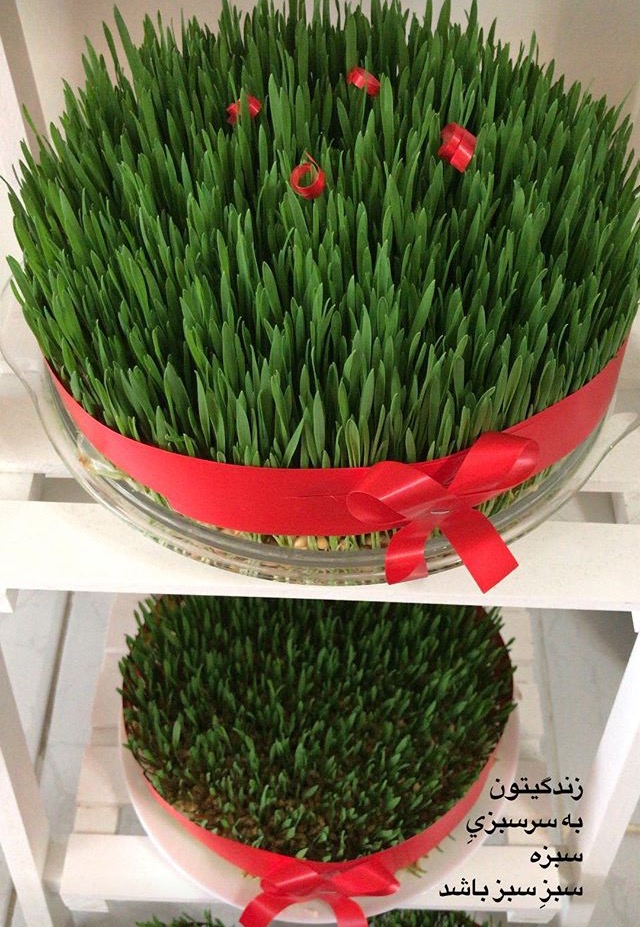 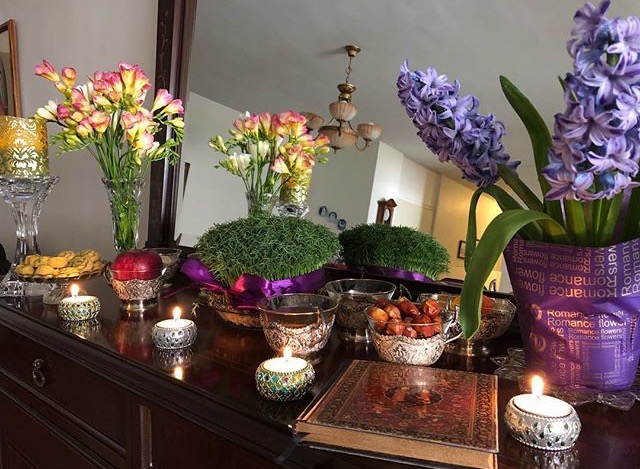 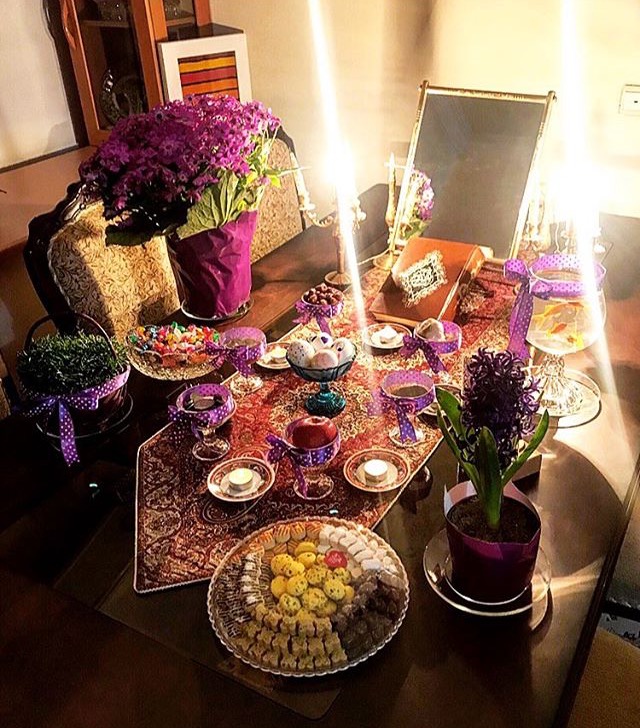 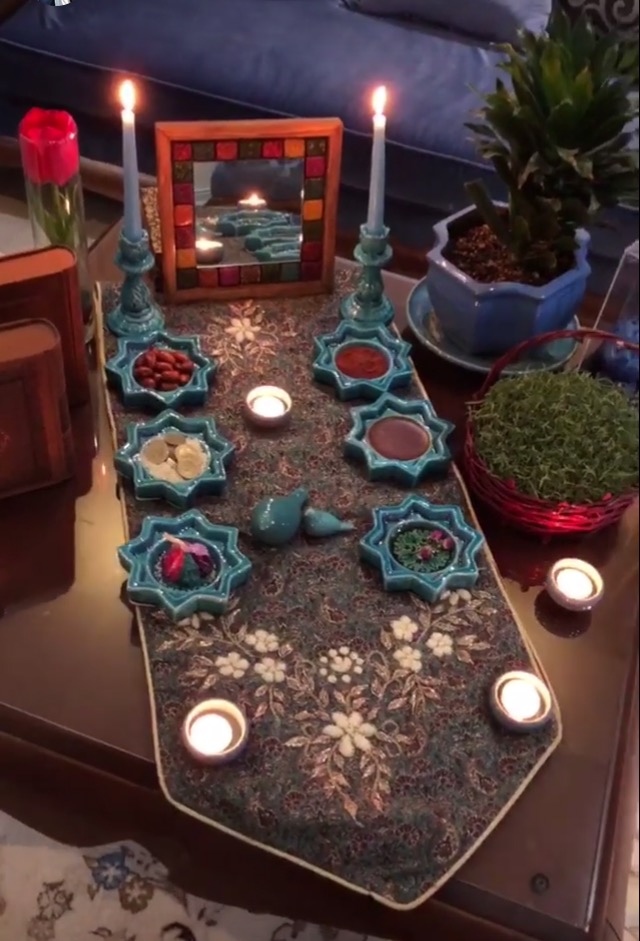 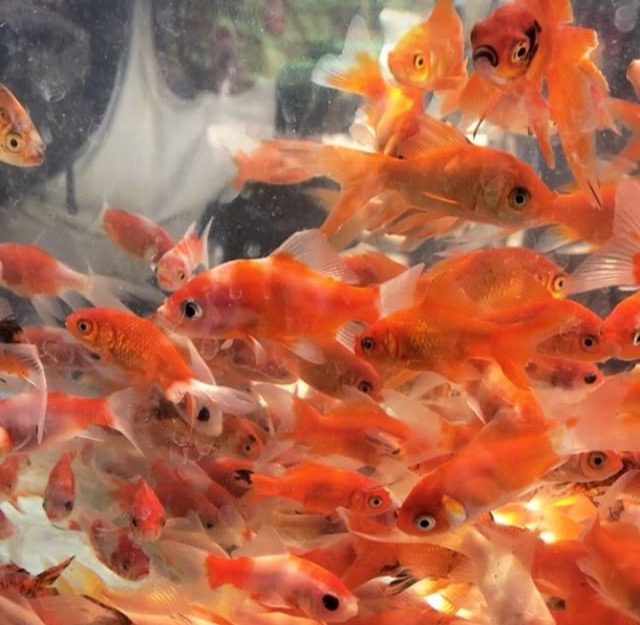 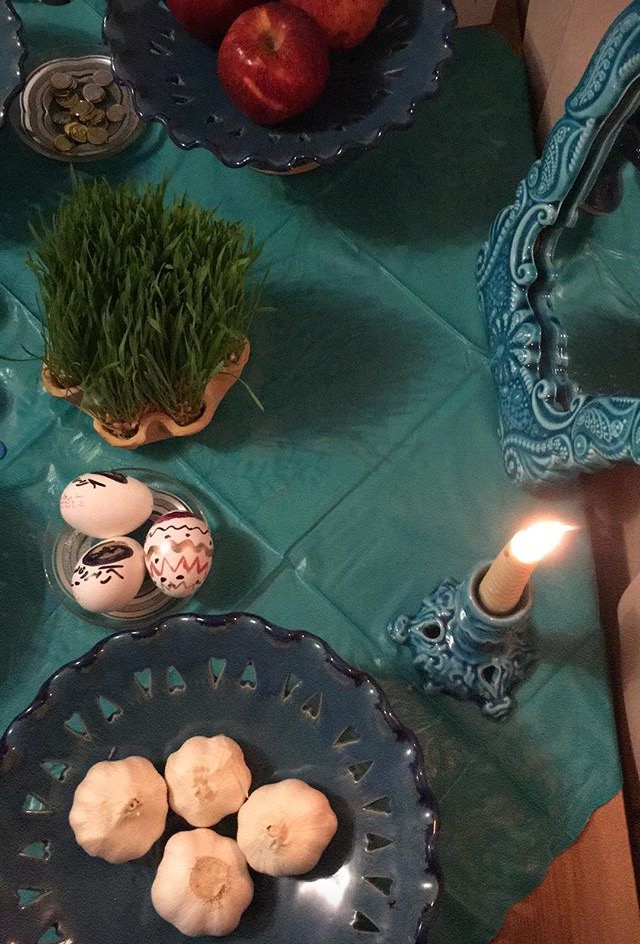 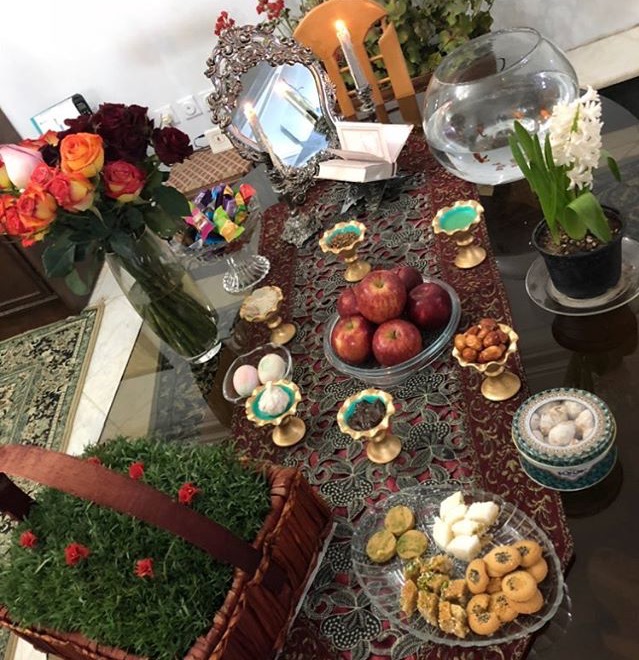 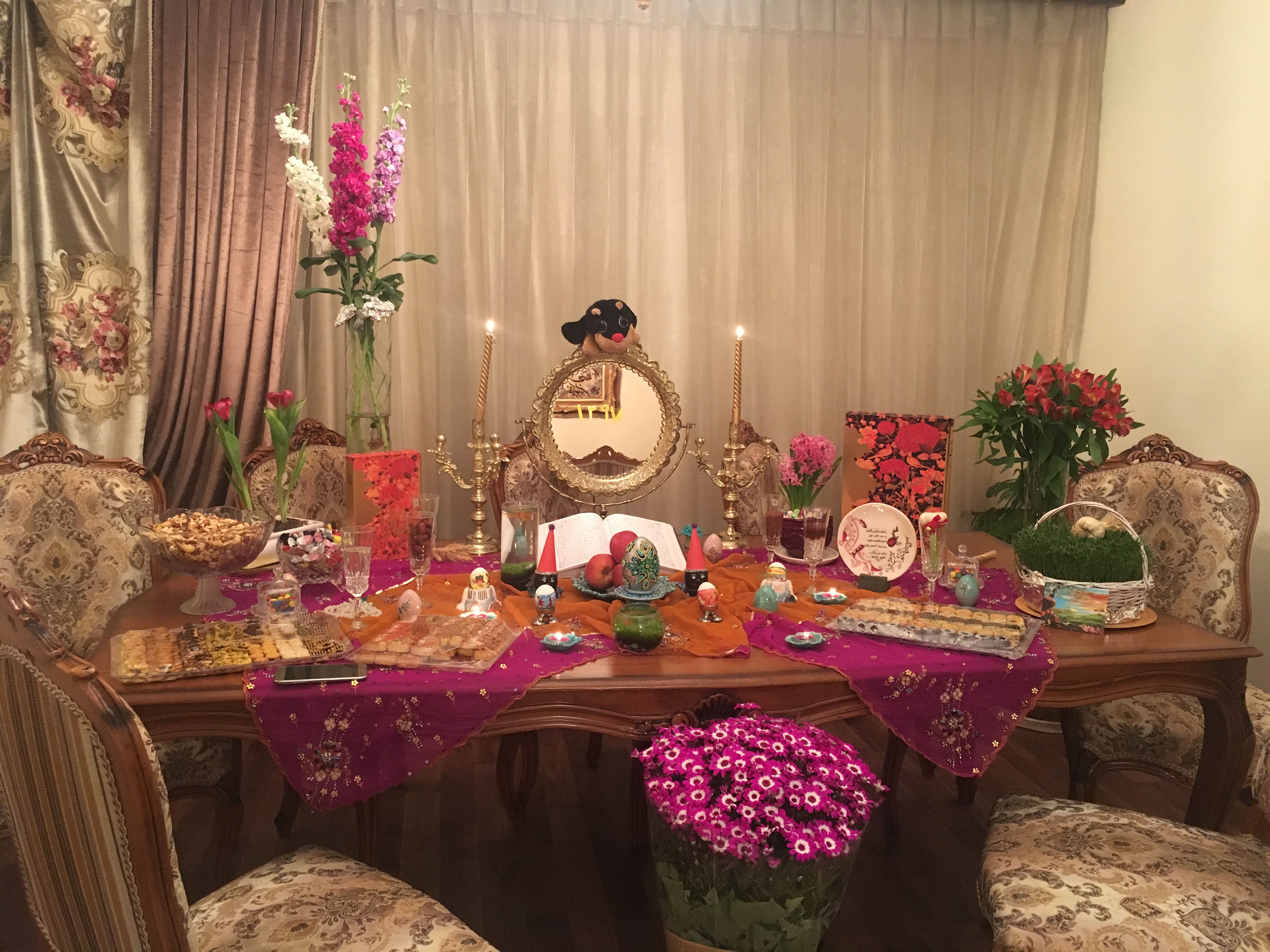 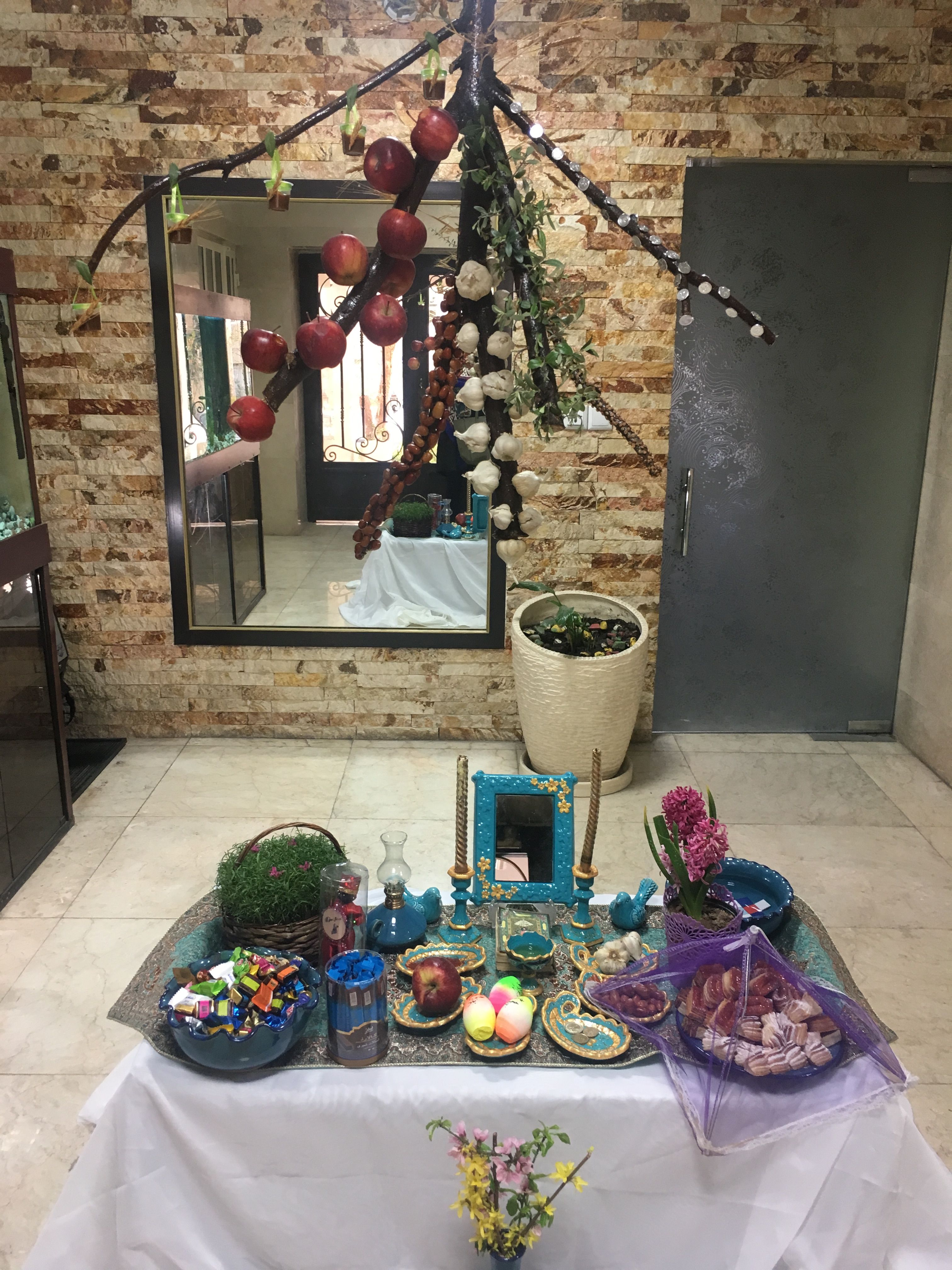 Your self upvote is flagged by The-Resistance team using the WE-RESIST bot.
We will be resisting with a team, stronger each day, unless you stop downvoting innocent people. Flowers are the symbol of love, happiness and cheerfulness. It provide us positive energy.

I loved your post, I was grateful to be I nolved to be able to contempete it very beautifull.

Upvoted and followed me!!!!

yes i agree with you dear friend thanks for beautiful comment

I am from China,my friend，see your comments， I feel in love with you. can you make friends with me?

The decoration is just amazing, i can see your culture is so Royal and mesmerizing😍... i wish you happy, wealthy and prosperous this persian New year.

you did really great !

Norooz Mubarak... Great post.. One of the best today.

what a glorious baby!

thanks my dear friend

who doesn't love the attractive smell of flowers coming from their houses and see them decorate will cheer anyone's mood. what a beautiful post and that baby is the cutest little thing. love your pictures and the post in general. Happy persian new year to you and your family. blessed

You are good in Photography @beautypics.

the smile in the child's face is worth billion dollar

yes i agree with you dear

Nice picture... @beautypics
It was a beautiful moment

Beautiful pictures! I'm totally amazed by the beauty of those flowers! :)

May be you can try smartstem,it gives you better rate

The name of Noruz does not occur until the second century AD in any Persian records. We have reasons to believe that the celebration is much older than that date and was surely celebrated by the people and royalty during the Achaemenid times (555-330 BC). It has often been suggested that the famous Persepolis Complex, or at least the palace of Apadana and Hundred Columns Hall, were built for the specific purpose of celebrating Noruz. However, no mention of the name of Noruz exists in any Achaemenid inscription.

After the accession of Ardashir I Pabakan, the founder of the Sasanian Dynasty (224 AD), consistent data for the celebration of Noruz were recorded.

Throughout the Sasanian era (224-650 AD), Noruz was celebrated as the most prominent ritual during the year. Most royal traditions of Noruz such as yearly common audiences, cash gifts, and pardon of prisoners, were established during the Sasanian era and they persisted unchanged until the modern times.

Noruz, along with Sadeh that is celebrated in mid-winter, were the two pre-Islamic celebrations that survived in the Islamic society after 650 AD.

Other celebrations such Gahanbar and Mehragan were eventually side-lined or were only followed by the Zoroastrians who carried them as far as India. Noruz, however, was most honoured even by the early founders of Islam.

There are records of the Four Great Caliphs presiding over Noruz celebrations, and during the Abbasid era, it was adopted as the main royal holiday.

Following the demise of the Caliphate and re-emergence of Persian dynasties such as the Samanids and Buyids, Noruz was elevated into an even more important event. The Buyids revived the ancient traditions of Sasanian times and restored many smaller celebrations that had been eliminated by the Caliphate. Even the Turkish and Mongol invaders of Iran did not attempt to abolish Noruz in favor of any other celebration. Thus, Noruz remained as the main celebration in the Persian lands by both the officials and the people. 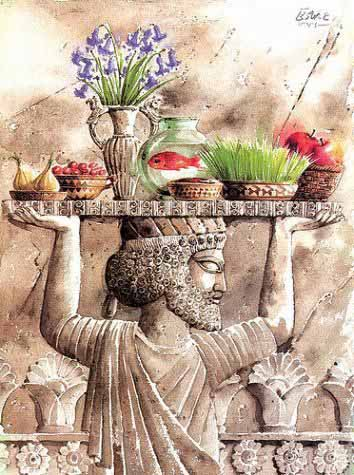 Just awesome,Sir. i think you are a great photographer........

If you like sharing, you will honor me. Thank you. very nice i love that

Amazing @beautipics. Seeing the photos, That must be a beautiful and unforgottable moment for all people that celebrated it. Regard from indonesia

look like you know how to enjoy life! Nice! :)

Challenge, where you can win up to 100s $SD!
If you want to, you can try it here:
https://steemit.com/win/@guessandgain/guess-and-gain-3-1-day-win-usd 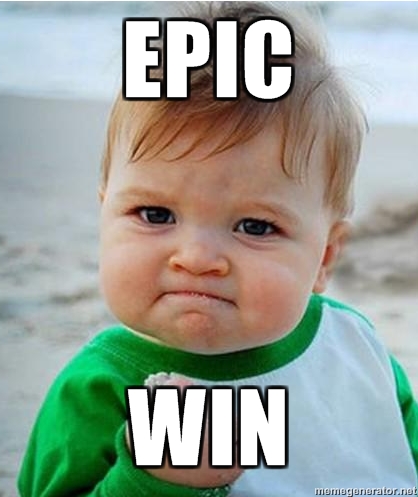 whether it be all beautiful for his days or just to celebrate and not change his life or how? 😊😊

Great photography. you are awesome. thanks for sharing

You got a 46.49% upvote from @postpromoter courtesy of @beautypics! Wow.
Excellent Photography.
Great contribution. Thanks for shear it.

It's beauty. An amazing picture shows the inner beauty of a photographer.

Hello @beautypics, your post has been captured and resteemed to our station see you for contributing good quality contents.
Curation hunters are waiting...
You may upvote this comment and follow us helping our community will grow chasing authors having quality contents.

Gorgeous Nowruz settings – the sofreh haft seen. You didn’t tell folks the name of the herald for Nowruz is Haji Firooz. I thought, from ancient images, that he played a Tombak or a Daf drum, rather than a tambourine. I suppose the tambourine is more widely available in our modern era. 😃

We just celebrated Nowruz in our household too. When my son was little, we would make Haji Firooz cut-out cookies. Now we prefer pistachio baklava nests. This year, we made salmon with Persian fish spice and the rice/limas/cinnamon/dill dish (I don’t know how to spell the dish name, but it sounds like pelow bakh-lay).

how beautifull view. i like it so much. tradisionale must keep. nice

I am a greedy human being. I have started my BTC adventure about one year ago with a little amount (0,04 BTC). While it reached 18000 dollars, my greediness increased as like BTC and I invest all my saving (about 17000 dollars=0,9 BTC) to BTCin a national exchange. Then I transfer it to an international exchange for trade and to regain. And you know the reminiscence of the story. Almost, I have lose my all trades. I have tried different ways (trade, steemit, youtube, dtube etc.) to earn my lose. But all my efforts went to waste. Today I take a radical decision. I will quit from this despair. But, there is a problem with my funds. It is about 7000 dollars. I am trying to forget it but, I realize that is not possible. So I decided to be honest and ask anyone who can help me with this situation by donating some BTC. The total grant I need is about 1 BTC. I do not want the donation from persons who in the middle of my situation. I am kindly asking the persons who earn quite a few from the BTC. Please remember that I am not a cheater. And please check my wallet id before sending any BTC. If it reached 1 BTC as of today (22/03/2018) please do not send any.

With my all respect,

A greedy human being.

Flowers are the symbol of love, happiness and cheerfulness. It provide us positive energy.Thank you

Lovely baby and her cutie picture.such a lovely photo.looks so so so pretty. thank you very much for sharing.go ahead.bye cutie pie.

반가워 친구 ^.^
Beautiful flowers and a pretty table.
It is a moment when the snow is fun :)

amazing photography. and kid is looking so cute :)

Innocent childhood, beautiful nature and wonderful smiles. We all love these things

so beautiful and peaceful

its a fantabulous pic of a child i hv evr seen.....
Thnxxx fr sharing with us a beautiful pic..sir.

Photo of this post is very nice and amazing. I am very impressed.

Beautiful pics,nice post. Is that girl in 1st pic your daughter?

Upvoted and followed me!!!!

Flowers are enough for the expression of love, and flowers are very beautiful.

So pretty and cute girl 😊

Everything nice but the first picture is enough to make my day...so adorable!

So lovely, my dear!

These flowers are so beautiful, reminds me to appreciate all the natural beauty around me

upvoted and followed me,,

It's so beautiful and amazing. Nice to see this.

Amazing!!
The flowers are lovely....i like what am seeing

You got a really good photography skill there my friend. I hope I could learn from you :)

Hi @beautypics, It's good post on photograohy! I enjoyed your photoghrphy and i like smile on the child's face. Keep up the good work.
It's always nice to see good content here on Steemit.
I know, black is an ancient Persian symbol of good luck.

A flower is a special kind of plant part. Flowers are also called the bloom or blossom of a plant. The flower grows on a stalk – a thin node – which supports it. Flowers have petals. Inside the part of the flower that has petals are the parts which produce pollen and seeds.

Join our bot We-Resist to protect minnows https://we-resist-bot.herokuapp.com
Come to our house to meet with the community https://discord.gg/qMWCbWR

@GrumpyCat, to your tyranny WE-RESIST

@GrumpyCat, to your tyranny WE-RESIST