One of the world's most spectacular nature donations about Sundarban 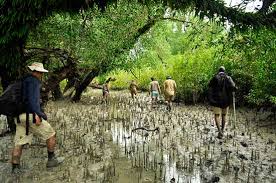 Fisheries in the Sundarbans: The largest fish reservoir in the Bay of Bengal, adjacent to the Sundarbans. 31.15% of the entire Sundarbans area is covered with huge waterways. The source of huge natural resources lies in the large part of the Sundarbans. Fisheries resources are available in more than 400 fish species of fish in Sunderban and adjoining coastal areas. Of which 120 species of fish are commercially collected by fisheries. Notable fishes of the Sundarbans are Hilsa, Vetki, Rupchandha, Datina, Kainmagur, Pangas, Leyte, Knife, Med, Perseus, Poya, Thapsi etc. Each year, hundreds of metric tons of white fish, bajra shrimp, dried fish and cucumber are obtained from the Sundarbans jalabhata, which earn huge foreign exchange in Bangladesh by exporting abroad. On the one hand, employment opportunities have been created on the one side of the Sundarbans fisheries. On the other hand, the Sundarbans have been playing pioneering role to meet the demand of protein for the people of the country, and compared with the data related to fish fishery in other parts of Bangladesh, it is found that the highest amount of fish is collected in coastal areas of the southwest. Only about 40,000 fishermen enter the forest to catch boat in the Sundarbans. Nearly 80 percent of shrimp and crab production and processing plants have been established in Bangladesh, in Khulna, Satkhira and Bagerhat districts adjacent to the Sundarbans. Shrimp production in the region is possible due to the Sundarbans mangrove forest. In order to preserve the mangroves of the Sundarbans and to continue production of fish, some steps have been taken by the Department of Forests, such as fishing in three wildlife sanctuaries under the Sundarbans. Outside the Wildlife Sanctuary, 18 canals have been banned in the whole year. Shrimp foams inside the Sundarbans have been banned. Crab is banned in January and February.
Sundarban Tiger: Tiger Census, 2004, there are 440 tigers in the Sundarbans. Out of which there are 21 tigers. On average, each tiger has 14.4 sq km of its own residential space. As part of the study on the Sundarbans Tigers, the Radio Kolar is hoisted around the neck of two tigers (whose name is the queen of Queen Rani Abay Chaparkhali) and their activities are monitored. The study found that both ranges of home ranges of 14 to 16 sq km are the lowest in comparison to other home-grown tigers in the world. The smallest home range of tigers is available in Nepal, which is around 25 to 30 sq km and the largest home range available. In Russia, more than 400 square kilometers. An analysis of these results of the study shows that the density of tigers is highest in the Sundarbans, which shows the fertility of the tigers in the Sundarbans and the suitability of sustainable living conditions. Sunderbans conservation efforts: 3 sanctuary centers have been set up for the conservation of biodiversity of the Sundarbans. For the purpose of free wildlife, proliferation and security, a specific part of the forest, where the different combinations of animals and trees have been declared as sanctuaries. All types of forest produce are collected in the sanctuary area and are notably prohibited. The total area of ​​3 sanctuary centers established for wildlife and environment is 1,39,700 ha, which is about 23% of the total Sundarbans. Below are brief descriptions of sanctuary areas

The Sundarbans East Wildlife Sanctuary: The sanctuary area with a total area of ​​compartment of 4, 5, 6 and partial area of ​​7 compartment of 7, covering the area of ​​39,227 hectares, consists of 22,575 hectares of land area and 8,652 hectares of water. In the north, the rest of the canal and the canyon canal, Baleshwar river in the east, the Banmora river on the west and Betamora in the west and the Bay of Bengal on the south are limited. Headquarters in Cuttack

Sunderbans South Sanctuary: The entire area of ​​the compartment of 43 and 44 comprises about 36,970 hectares of sanctuary area, of which 21,000 hectares of land area and the remaining part of the ground. In the north, the cagna river and the canoe canal, the Kagawa and the dead river before it, the sanctuary is limited by the Malancha and the big Pangasia and the Puttiqar and the Bay of Bengal. Headquarters Nilkamal.

Sundarbans West Sanctuary: The Sunderbans West Sanctuary consists of the entire area of ​​compartment no-53, 54, 55 and part of compartment 49. In the north, the connection between the old Gouri, the Eilashadi and the Jamuna, the Jamuna river in the east, the sanctuary is limited by the Harinbhanga River and the South Talpatti Island and the Bay of Bengal on the west. The total area of ​​this sanctuary area is 71,502 hectares of land area and 24,148 hectares of waterways. The head office is notified. 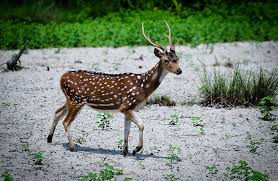 Submit
$0.00
18 votes
4
Authors get paid when people like you upvote their post.If you enjoyed what you read here, create your account today and start earning FREE STEEM!
Sort Order:
[-]
marakib1993 (26)  ·  2 years ago