The Absurd. Albert Camus and Zen.

The topic of absurdity is present in the works of various philosophers, including Schopenhauer, Kierkegaard, Nietzsche, Kafka, Sartre. These include and Albert Camus, who, despite the fact that he denies to be a philosopher of the absurd, deals with the absurd and the absurdity in most of his works ( "The Stranger", "The Myth of Sisyphus," "The Plague," "Letters to a German friend "," Padding "and others). The meaning of absurdity as a philosophical system is briefly conceived in the following: All man's efforts to find meaning in the world in which he lives is in useless because such a meaning doesn't exist. So, what are the alternatives to action for a person who realizes that he lives in a world without meaning? Camus looks at three scenarios of action: suicide, dogma, reconciliation. 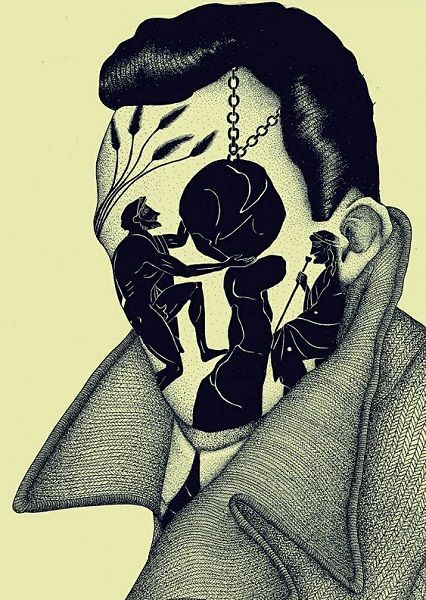 If life really doesn't make sense, suicide comes with the sole purpose of recognizing this fact. This is the most radical solution to an absurd situation that comes from the collision between two ideals. The first - man's desire to be meaningful (but to whom?) And the second - the silence of the world to this desire. The fact is that the life of man, and of every living being, ends with death. Then, when man is forced to live a life without meaning, why not speed up the coming of what is inevitable? Camus, however, rejects suicide as a possible solution to the situation, because if life is an absurd, it is even more absurd that man counteracts something that is absurd. The absurd would not be absurd if it allows the man to oppose it.

The second alternative to the absurd that Camus looks at is the dogma. This means that man deny the existence of absurdity, the conflict between man and the world, rationalizing and thus eliminating absurdity through dogma (it is about religion and its characteristic dogmatic postulates). Camus also rejects this opportunity. The choice of people to seek support in dogma Camus considered to escape from truth and freedom as man finds solace in productions that may prove to be no less absurd and intractable logical dissection of the very absurdity provoked this reaction. So, as the only opportunity for action for the man remains to reconcile the absurd and to accept it. If truly "God is dead," it makes man completely free. He is capable of giving meaning to life instead of seeking it into the existence of a higher power. Thus man triumphs in absurdity, in his inevitability. Camus position on absurdity and man's attitude towards him as part of life presents a different but not a new way of understanding it. The Absurd or the lack of a logical explanation of reality are also present in other, different form the western philosophical systems. An example is Zen's analogism. What are the similarities and what are the differences between Camus' position and what Zen says about it? The common between Zen and Camus is in the subject - the absurdity or the alogy, but the similarities between Camus absurd and the absurd in Zen are exhausted. Then what are the differences between the two? First of all, in the approach Camus and Zen apply to absurdity. Like previous philosophers, Camus uses the analytical approach to reality, while acknowledging the lack of logic in the absurd, which automatically makes it unrealistic to him. Man is helpless in front of the absurd in the results from that, if you choose to put up with it and accept it, he chooses to open or create in an absurd situation something pleasing in terms of logic, in which man finding happiness. This Camus considers the only possible way for man to triumph not over the absurd, but in the absurd. Zen, on the other hand, denies the analytical approach to reality. It should be perceived as it is without being divided and understood through its constituent parts. In Zen, the absurd or analogism is present in practices such as the koan, whose purpose is not to confuse its addressee. The Koans, combined with other Zen practices, can act as a catalyst to accelerate enlightenment or satires. That is, the absurd is something else, the quest to which it actually makes sense of human life. In Zen, the attainment of a new point of view of things is seen as the beginning of enlightenment, and man achieves one when he is fully exhausted, defeated. This, from Camus's point of view, proves the presence of absurdity, but, unlike Zen, he does not put anything beyond. Indeed, in Zen, the absurd is seen more as an aid than as an environment of human existence. In addition, assuming that there is a possible parallel between Zen enlightenment and religious transformation in Christianity, there is another difference. Camus rejects dogma as a possible option for human behavior in absurdity. That is, Christianity and enlightenment, as they understand it, are impossible, according to Camus. But in Zen there are no dogmatic postulates in which one can find support. Zen has no idea for ​​God, but there is enlightenment, unconnected with God. Is it possible then the relationship between Camus and Zen? The answer to this question is not. The reasons for this are several. First of all, as mentioned, Camus puts nothing beyond the absurd, including the idea of ​​enlightenment of any kind. Secondly, Western thinking excludes the possibility of degrees in the development of human consciousness. Camus does not even deal with this question. In this way, he rejects the possibility, through the development of human consciousness, to overcome the absurdity. Camus points out that the absurd is absurd because it can not be overcome. Moreover, he appears to be inclined to identify reality with absurdity, and this is completely foreign to Zen. Zen does not identify reality with anything. The meaning of the absurd is not in his overpowering, because he is not overpowering, but his ability to influence the development of consciousness. Third, the fact that man has to create something in which to discover his happiness, in an absurd situation, speaks eloquently about the breadth of human abilities, but in essence is nothing but an escape from absurdity. To accept it does not mean to surround yourself, though inside it, with sources of happiness to compensate for its existence. Therefore, even the resignation with the absurd, as Camus describes it, is not an effective solution to the situation.

In conclusion, Zen proposes a more constructive way of dealing with the absurd, because it does not transform it into the ultimate state in which man is living. Zen accepts the absurd to reject it later on the road to something else. Zen does not have to be identified with absurdity. It is a part of Zen, but Zen does not consist solely of logical formulations that seek to confuse its addressee.Behind the logic and denial in Zen lies a higher form of assertion that is outside the sphere of absurdity, not within it, as with Camus. The man, according to Camus, should create a form of affirmation in the absurd with the idea of ​​compensating for the fact that man lives in the absurd. The Absurd as the last and constant condition in which everything exists is far from any form of affirmation, since it is not effective. Thus, Camus closes the circle of possibilities for the man of absurdity, while Zen spreads through man a path that seeks to achieve a new perspective and enlightenment.

Okey, I upvoted. When I have time will write something :)

You're doing great keep it up

Albert Camus is the definition of cool that doesn't look to be cool.

That is very well said! :D

Fantastic views, these guys are really the philosophers of wierdness look at their names meanwhile

keep it up..
Thankyou @godflesh

Great post. The meaning of life in life itself

This post has received gratitude of 13.94 % from @appreciator thanks to: @godflesh.

13.94%?? I would love to see what the algorithm is that comes out with that percentage.

But is Zen really trying to be absurd? Koans have meaning for the protagonists, else there is no revelation, even if seemingly absurd to an outsider. The "sound of one hand clapping" has become a classic precisely because it works even without the context, although the full vignette develops the solution.
Thanks for the read :-)

My favourite Zen teacher, the late Daido Loori, related this absurd gem to an assembly of his students.
Student: You said that enlightenment is an accident.
Loori: Yes.
Student: Well, if it's an accident, why do we need to work so hard at zazen all the time.
Loori: Because zazen makes you accident prone.