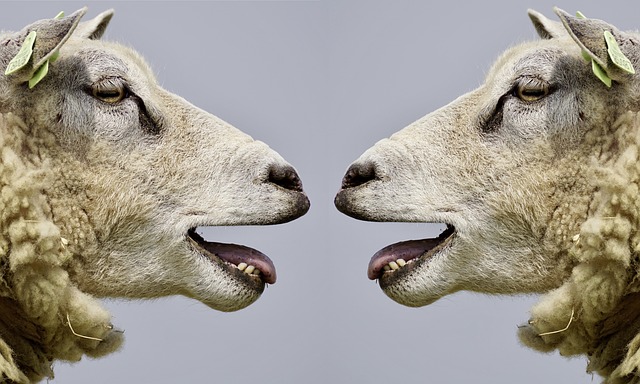 I’ve always had the feeling that sitting behind the computer changes the way we communicate with each other.

In discourse analysis there is a concept called face, which refers to a person’s desire to have their own self-image be appreciated by those they interact with. Furthermore, the “politeness theory” states that politeness is used by people to communicate something face-threatening (attacking the person’s self image), but in a manner that allows the hearer to save face. For example, an interaction may look like this: In this ultra realistic drawing I made, the handsome man on the left is not insulted by the more rugged, wholesome man on the right. Instead, he is politely asked to reconsider his erroneous statement.

But why is the concept called face? In my opinion, the reason is two-fold: Firstly, it is very easy for us to determine delight, embarrassment, shame, happiness, pain and so on through others' expressions. Secondly, seeing emotions on another person’s face influences our own emotions (empathy); when we see happiness, we feel happy, when we see (or cause) embarrassment, we can’t help but reciprocate that emotion to a certain degree.

My belief is that the lack of politeness sometimes observed on platforms such as Twitter and Reddit, may be caused by the fact that we are not communicating face to face. 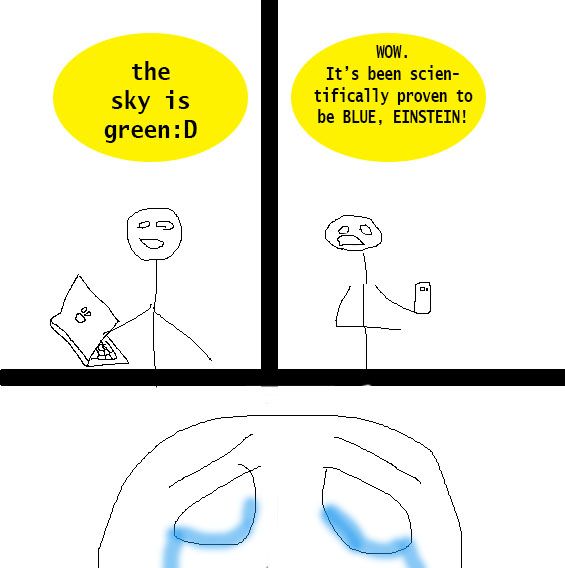 Handsome-man is sad. Rugged-man can't see face so doesn't care
Sure, debates can get heated, but how often do you see the kind of vitriolic back-and-forth in real life compared to the daily arguments on political Facebook posts, or in the comment sections of most news articles?

This brought up a question: does the monetary incentive on Steemit serve to restore some of the politeness that is sometimes missing in online discourse? In my short time on Steemit, I have observed a healthier exchange of ideas and an overall more positive community than other social media platforms I use. These are of course the observations of one person, so bias is likely a factor.

Nevertheless, while I have seen people disagree with one another, I have not seen much outright insulting or disrespectful behavior amongst the Steemit community. Then again, I’ve only been here a month! Whether this is due to the smaller userbase, or (as I suspect) the mechanics of the platform, time will tell.

What are your thoughts on the matter?

Great article! I completely agree that distasteful discourse is very likely due to the fact that we do not interact face to face.

I also agree that Steemit lacks this type of unproductive discussion revolving around agreements because there is a pay incentive. I believe, however, that users are very nice to others on the platform.... actually too nice. Many comment positive feedback on posts of poor quality, often times without reading the post. If I could change one thing about the website, I would change this characteristic because it limits constructive criticism and useful suggestions. Instead people create fake, always-positive personas for financial gains.

Thanks @aircastle !
You're right about the "fake" comments that you see a lot on Steemit...BUT I feel like they are very easy to spot.
Also, maybe it is better to have a bunch of "fake positive" comments, but maybe the trade off is worth it?
We will see :)

@aircastle Interesting. I hadn't considered that actually, but you are absolutely right.
Still, I tend to agree with @alihasnain3k that they are usually relatively easy to spot and let's be honest, there are much worse ways to try and abuse a system/community for personal gain than to be fake-polite XD
Personally at least, I much prefer that than the ugliness that's going on generally on social media..

@alihasnain3k
@jillustrations
Definetly true, this is a lot better than overwhelming negativity for sure.

When I was a Steemit newborn in December I saw a global crowd of writing people around me, smiled at everybody and felt lucky. Then I discovered the difference between different animals in the Steemit sea and that the system is attractive to greedy people. Yesterday night I was on YouTube and was shocked because the money makers dominate there, too, hoping to attract even more greedy audience to invest and make a Steemit career. No good PR for Steemit. My perspective has changed: There are all sorts of animals and it is offending to real whales what is understood to be a Steemit whale. I feel disturbed in my happy sealife by a huge community of sharks and really do not want to become one of them (I am aware this comparison is wrong, again, because a shark can never be so greedy and wicked as humans). How can a good comminication be possible in this atmosphere? I admit I had situations when I felt silly by replying to one article after the other nicely with all that noise how to make money with buying Steemit, use bots, gain upvotes... Nothing against it, but where is the love, where is respect and mutual assistance? Steemit is a mirror of the real world, let‘s be realistic. There are so many worlds within the world as people. Each one of us is a universe. I prefer to in a cluster of loving universes. Where there is love, there is communication from heart to heart, also in the digital world.

Thank you for the comment :)
You're right Steemit is a mirror of the real world...But I do not think that is necessarily a negative thing :)

Right! Steemit is a change to create a better world than the one we have right now, and that's what I love it for. Experiences are better than in real life, eg you are rewarded for being friendly, helpful and giving useful content. And it is much easier to find people with similar interests, hobbies, projects... If only more and more people realize the changes of this medium!

I suppose even in the most beautiful landscape you'll see beasties crawling around if you take the time to turn over a rock here or there...
The problem is, where there is anything to be gained, whether it is money, fame or anything else, no matter how good the intentions of the creators, there will be a subculture emerging who is only after one thing: the most possible personal gain as fast as possible, come what may. I think it's human nature and there is nothing to be done, except try to avoid those people as best as one can, and actively look for the people who truly care instead. I've only been on Steemit barely a week but I feel that the difference in post quality and feel between someone who really cares about the community and someone who is only out for the rewards is very noticeable most of the time. That is very encouraging! And as you mentioned as well, the system is somewhat self regulated, because you are generally more successful when putting out quality content and behaving like a decent human being.
Of course it sucks that there are "corrupt whales" and I suppose they can do a lot of damage but as both you and Ali said, it's a reflection of "the real world".
sadly.
there will always be those who don't give a sh*t unfortunately :(
Let's hope that steemit will manage to keep the balance and not topple over "to the dark side". There's a tipping point somewhere, where if too many unhealthy elements in the system become too powerful, the whole thing tips over and becomes corrupted.
Very much like an eco system...
sorry if this is a bit disjointed, I'm kind of thinking as I write..
anyway! Hopefully, Steemit can keep the light and the dark in balance! May the Force be with us... XD

At first the internet was like the Wild West. Pioneers and Roughnecks were beginning to mingle in forums and chatrooms alike. The afforded anonymousity acted like a shield for many a fledgling troll and shitposter. While tastes may vary, the internet has certainly brought to light content and behaviour that extended into several extremes. With a perceived notion of no repercussion it's easy for someone to act like a douche and get away with it! Manners maketh a man they say...I say play Manner Game <3

Indeed! manner game is important, and maybe building incentives into platforms to promote manner is a strategy we can look forward to :)

You should make a post about that, hon! would be a good read. ;)

Brilliantly written and very thought stimulating!
I enjoyed this post profusely.
Unfortunately, I have not much of "value" to say in this comment because I basically agree with all your musings and there's not much to comment upon for me hahaha
rock on, looking forward to the next one already.