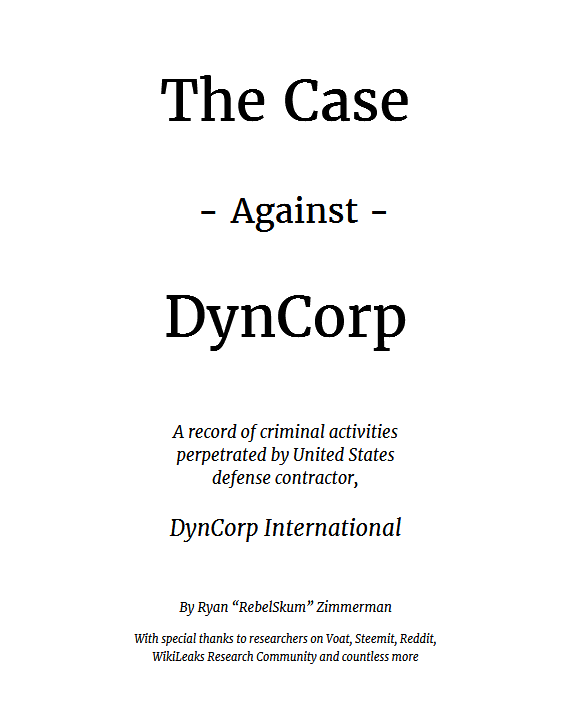 To the forgotten, the lost, the hopeless,
the brave, the brilliant, and the selfless.
Until all of us are free.

This book is free to everyone.
Use it wisely.
Credit to me is unnecessary, but appreciated.

“I only regret that I have but one life to lose for my country."
-Nathan Hale

What became the United States defense contractor DynCorp International began in 1946 as California Eastern Airways (CEA), an air freight business, and Land-Air Inc., in aircraft maintenance company founded by veterans of World War II. In 1962 CEA became “Dynalectron Corporation”. By 1986, Dynaelectron was one of the largest defense contractors in North America. In 1987, Dynalectron changed its name to DynCorp and subsequently became a privately traded corporation in 1988. In 2003 DynCorp officially became “DynCorp International”.

At about the same time DynCorp began involving itself in criminal activities perpetrated by the United States government and its rising military-industrial complex. This book’s content begins in the 1980s when DynCorp began its work trafficking drugs and weapons during the Iran-Contra Scandal. It takes the reader through the 1990s human trafficking scandals in the Balkans, through the 2000s human and organ trafficking scandals, and additional major criminal activities leading up to 2017.

Originally I wrote this as a 10-part blog series also titled The Case Against DynCorp, followed by a podcast, all of which can be found on my Steemit blog. This book, however, contains further refinements, edits, elaborations and formatting intended to make it better suited for print and mass publication as a book.

The information contained in these pages is of the utmost importance. It outlines a criminal enterprise conducted by one of the most prolific and well-resourced military corporations in the entire world. DynCorp International represents a threat to everyone, whether they are from the United States or not. Worst of all, DynCorp represents a particularly dangerous threat to children.

No DynCorp employee has ever been criminally prosecuted for any of these crimes. While most recently in April of 2017 the Vice President of Business Development for DynCorp, James Grazioplene, was arrested for molesting children in the 1980s, this was during his term as an officer in the United States Army.

With that said, do not take this as a personal attack on all employees of DynCorp International and persons in the public or private armed protection services. I do, however, stand by my general theory that privatizing military and intelligence agencies leads to disastrous results. On a personal level I would prefer to live in a world where military corporations such as DynCorp didn’t have to exist.

The purpose of this book is to inform and properly equip the reader with facts, sources, perspectives and materials for founding their own argument. In addition, it is to memorialize the victims who have gone without a voice or justice for so long.

The entire book can be downloaded as a PDF for free at the Pizzagate Wiki.

Thank you for both the effort to assemble such knowledge and the shout out :)

Have you thought about submitting through Smashwords? It'll put it on several platforms, from kindle , nook, istore, google books... You can set the price to 0 and still get it way out there mass red pilling.

Awesome! Will definitely be looking into those!

Congrats, after a nomination by @v4vapid you have been selected as Author of the Day by the Steemvoter (SV) Guild, keep up the good work and helping make Steem great!

Note: You should receive many guild votes shortly, enjoy! Thanks, @v4vapid! It means a lot coming from someone I look up to.

Le BOOM!!
Stoked you got this one, you earned it. You put a lot of effort into this, just thought I'd do whatever I could to get more eyeballs on this and the extra Steem never hurts.
Chapter 8 is my favorite ;)

Thank you very kindly. Looking forward to hearing more on your work!

Thanks for all the support! Stay awesome!

Thanks a ton! Couldn't have done it without all the great, inspirational Steemians and researchers who helped gather this info from the depths.

Resharing @phibetaiota
Thank you for this important contribution.
Keep up the important work.
~The Management.

Thanks as always for the support! Feel free to host a copy of The Case Against DynCorp on phibetaiota if you like!

Thank you for the mention, my friend! Great work!!!

Couldn't have done it without y'all!

This post has been ranked within the top 50 most undervalued posts in the first half of Apr 22. We estimate that this post is undervalued by $1.63 as compared to a scenario in which every voter had an equal say.

See the full rankings and details in The Daily Tribune: Apr 22 - Part I. You can also read about some of our methodology, data analysis and technical details in our initial post.

I just found this today. I tried to dl the book, but the site is down. Is there another source?