The Dutroux Affair - Pedogate : From the bowels of the Redditor archive

mandireiserra (66)in #pedogate • 5 years ago

Long ago, a well-researched Redditor posted a thread which contained multiple sources. I am posting this in parts, in the spirit said Redditor mentioned in his ending notes:

Some final notes. This account is brand new for anonymity purposes but I am a long time redditor and have been actively contributing to this conspiracy subreddit for a period of time as well. Feel free to repost this essay as you see fit, anywhere, without worrying about credit. I do not care about recognition, I only want this information to be made public.
Source 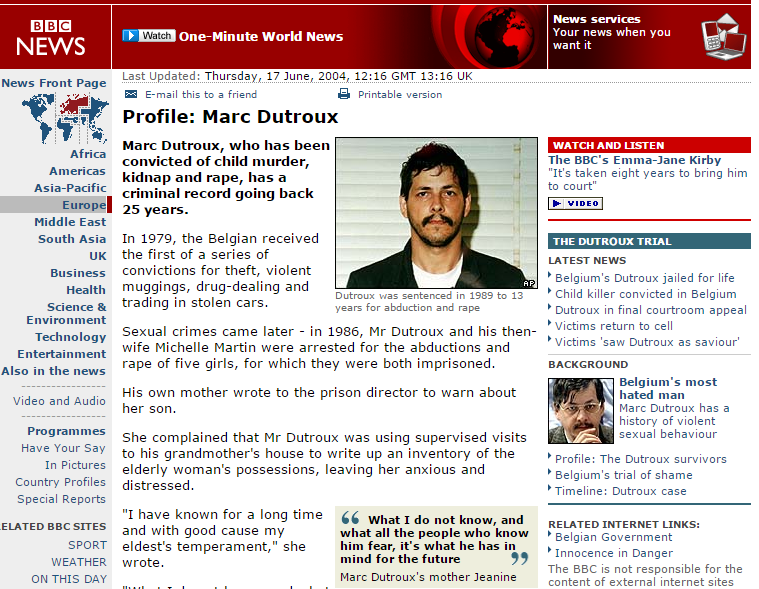 I will begin in Belgium, with a case known as the Dutroux affair. This case is important because it illustrates how investigations can be undermined by a cabal able to place its members in crucial positions of power, and how powerful people can be implicated in abusing children. The Dutroux affair is was covered extensively by the mainstream media, 3, NY TIMES, I use the MSM as most of my sources and was HUGE 4, NY TIMES news in Belgium, where 350,000 people took the streets to protest the handling of the case, known as the famous White March, from a nation of just 10 million.

The case begins in 1995, when multiple young girls began disappearing around the area of Bertrix. Young girls had been disappearing in this area for a couple of years but the BOB (equivalent of the FBI) was unable to develop any solid leads. A breakthrough was made when a suspicious white van was reported, and the police were able to trace it to Marc Dutroux, a known pedophile. Dutroux had been released from prison just a few years earlier, after serving a third of his sentence, despite reservations among those involved in the hearing and his own mother, who had warned the parole board that he would certainly cause harm again 5, BBC. It was also revealed that Dutroux, though unemployed and receiving welfare from the state, owned seven homes and lived quite lavishly 6, NBC, from his involvement in selling children and child porn. It turns out that his mother was right, and Dutroux was responsible for the recent abductions. Girls as young as 8 reportedly starved to death in a makeshift dungeon in his basement, after months of sexual abuse 7, GUARDIAN UK.

The horrible transgressions committed by Dutroux are widely available knowledge and thoroughly documented, and though disturbing, are not important enough to focus on this case. Now, I will attempt to highlight the incompetence of the investigating police, and the subsequent cover-up of evidence by the state. Police had investigated Dutroux multiple times without any arrests. Once, they entered his home and witnessed the outside of a makeshift dungeon in his basement, while two girls were being held and starved inside. They even reported hearing voices, though they said they believed Dutroux's story that the voices were coming from the street outside 8, FOX NEWS. Police ignored a tip from an informant, who said that Dutroux offered him between 3,000 and 5,000 dollars to kidnap young girls. 9, CRIME LIBRARY (link no longer exists). Again and again, police failed to act on information, or acted with complete incompetence. Incredibly, Police had in their possession a video tape of Dutroux constructing the makeshift dungeon in one of his basements, and would have saved the lives of two girls who were being tortured while the police held on to the evidence, had they viewed the video tape and acted on it 10, GUARDIAN UK.

By September 1996, the official body count had reached 8, and public outrage over police incompetence mounted 11, GUARDIAN UK. Why had a known pedophile been released so early from his original prison term, and allowed to terrify a country while the police stumbled about, seemingly complicit in the carnage?

When the case transferred from the police to the courts, the coverup became much more egregious. The lead prosecutor, Jean-Marc Conorrette, was dismissed from the case, which drew huge criticism from across the nation 12, NY TIMES. Conorette became a hero because it was his initiative that led to the police actually finding two girls in Dutroux's captivity. He also was instrumental in finding the bodies of four more girls. Conorette would later break down in tears in court while describing the death threats he received when he was still involved with the investigation 13, TELGRAPH UK.

Fuel to the fire would be added when a highly regarded childrens activist, Marie France Botte, claimed that prosecutors were sitting on a politically sensitive list of high profile customers of Dutrouxs thousands of video tapes 14, LA TIMES.

Marc Verwilghen, the Flemish parliamentarian who became the most popular politician in the country after leading the inquiry into Dutroux, claimed that many in the Belgian establishment, including heads of government, refused to cooperate, and sought to stifle and ridicule his report. He claimed that magistrates and police were officially told to not answer certain questions, in what he described as a 'characteristic smothering operation'. He was further quoted as saying 'For me, the Dutroux affair is a question of organized crime'. 15, GUARDIAN UK. A parliamentary panel revealed the names of 30 government officials it said were complicit in the hiding of Dutrouxs misdeeds, none have been punished 16. LA TIMES

The most important information on the case comes from a victim of Dutroux. Regina Louf was the first to come forward, and was candid about the abuse she received at the hands of Belgiums child abuse networks. In 1996, she named and described in great detail, to a specially assembled police team, the people and places involved in the paedophile ring. Senior judges, one of the country's most powerful politicians - now dead - and a very influential banker were included. 17, BBC. The BBC article [17] says, “The sessions not only involved sex, they included sadism, torture and murder; and again, she described in detail, the place, the victims and how they were killed.” She corroborated that one of Dutrouxs associates, Jean-Michel Nihoul, was instrumental in the abuse parties. "At these parties Nihoul was a sort of party beast while Dutroux was more on the side." Nihoul had significant connections among Belgian political and financial elite. He confessed to organizing an orgy at a Belgian chateau attended by government officials 18, TELEGRAPH UK. It emerged that Dutroux and Nihoul were part of a long distance child trafficking ring that imported children from Slovakia 19, BBC.

Lets get back to the questioning of the witnesses. The primary witnesses to step forward all suffered from Dissociative Identity Disorder. In 98% of DID cases, the person suffered extreme sexual abuse as a child 20, MERCK WEBSITE. The abuse that the Dutroux witnesses attested to is beyond comprehension. Louf, and other witnesses, recounted being raped by dogs and snakes, and being forced to witness the murders of other children which were captured on video tape 21, REGINA LOUFS BOOK. That Louf spoke the truth about witnessing these murders is laid out HERE in an excellent manner. She gave a tremendous amount of detail to her prosecutors that she simply could not have known without being there herself, and there is simply way too much evidence to lay it out here. I recommend reading the whole page, which is as long as a short book, as the research is simply phenomenal. She also reported being involved with Satanic rituals, which I will address in greater detail later in the post.

Despite evidence that linked Dutroux and Nihoul to abuse parties and murder snuff films, the prosecutor that replaced Conorette, Jacques Langlois, completely dismantled the investigation. He sent police out on false tips and helped spread disinformation in the media. Although nearly 100 high profile people in government, religion, entertainment and finance being accused of involvement in child abuse 22, ISGP (link no longer exists), no one of significance other than Dutroux was ever jailed. 9 police officers would eventually be arrested in connection with the murders 23, LA TIMES contains dozens of suspicious deaths among those who were helping the case. I have only presented a small picture of what amounts to a mountain of documentation on Dutroux.

I understand that my discussion on the Dutroux affair does not validate any of the claims in the title of this post. It is only one small piece of the puzzle. It shows how, from the bottom level of police work to the top level of prosecution politics, people complicit with pedophiles can be placed into key positions to ensure that investigations never bear fruit. Now I will briefly highlight pedophile rings that operated parallel to Dutrouxs during the same time period, again in which no high level officials were brought to justice, although they undeniable participated, to illustrate how widespread the child porn and child abuse epidemic is. I will then move on to more important cases. In Latvia, three top officials, including the Prime Minister, were named in connection with a pedophile ring in which 2000 children in the country were abused 24, LA TIMES. An online ring known as Wonderland was busted and yielded 750,000 images of children 25 BBC. From the article [25]: “Wonderland originated in the United States but also operated in Australia, Austria, Belgium, Finland, France, Germany, Italy, Norway, Portugal, Sweden and Britain.” None of the men charged in relation to the ring served more than 30 months in jail, and only two were put on the sex offenders registry (in the year 2000!!!) 26, GUARDIAN UK. A child porn ring in Mexico was busted and said to have thousands of clients in the United States 27, BBC. Child porn videos reportedly made a Russian ring 410 million dollars being sold in Germany, Italy, and the United States 28, GUARDIAN UK. A Dutch ring was discovered in which images and videos of abuse of infants were circulated 29, NY TIMES. A magistrate leading an investigation into an Italian pedophile ring denounced what he called a “paedophile lobby” of powerful politicians which he said openly obstructed his investigation 30, INDEPENDANT UK. French police arrested 250 people associated with child pornography within a year of the Dutroux affair 31, NY TIMES

The redditor that gathered all those links deserves kudos.